In 2004, and for the first time, more money flowed into developing countries through direct investment, philanthropy, and remittances than through official development assistance. That trend has only accelerated in the years since.

This financial dynamic did not escape the U.S. Agency for International Development (USAID). In 2014, USAID launched the U.S. Global Development Lab (the Lab) and, within it, the Center for Development Innovation (CDI), in an effort to harness and incentivize new partners, talent, and networks to address development challenges, while at the same time sourcing and scaling innovations with the potential to improve millions of lives.

Along with the launch of the Lab, USAID set up the CDI contract to support this mission. Implemented by DAI, the recently concluded project delivered on 50 unique tasks for USAID bureaus, missions, and teams seeking to experiment with innovative methods or accelerate promising innovations. In doing so, CDI engaged hundreds of outside individuals and firms. By investing in CDI’s services in co-creation, acceleration, and more—to the tune of $24.5 million in all—USAID operating units embraced an innovation-driven approach that is increasingly the new norm, characterized by: 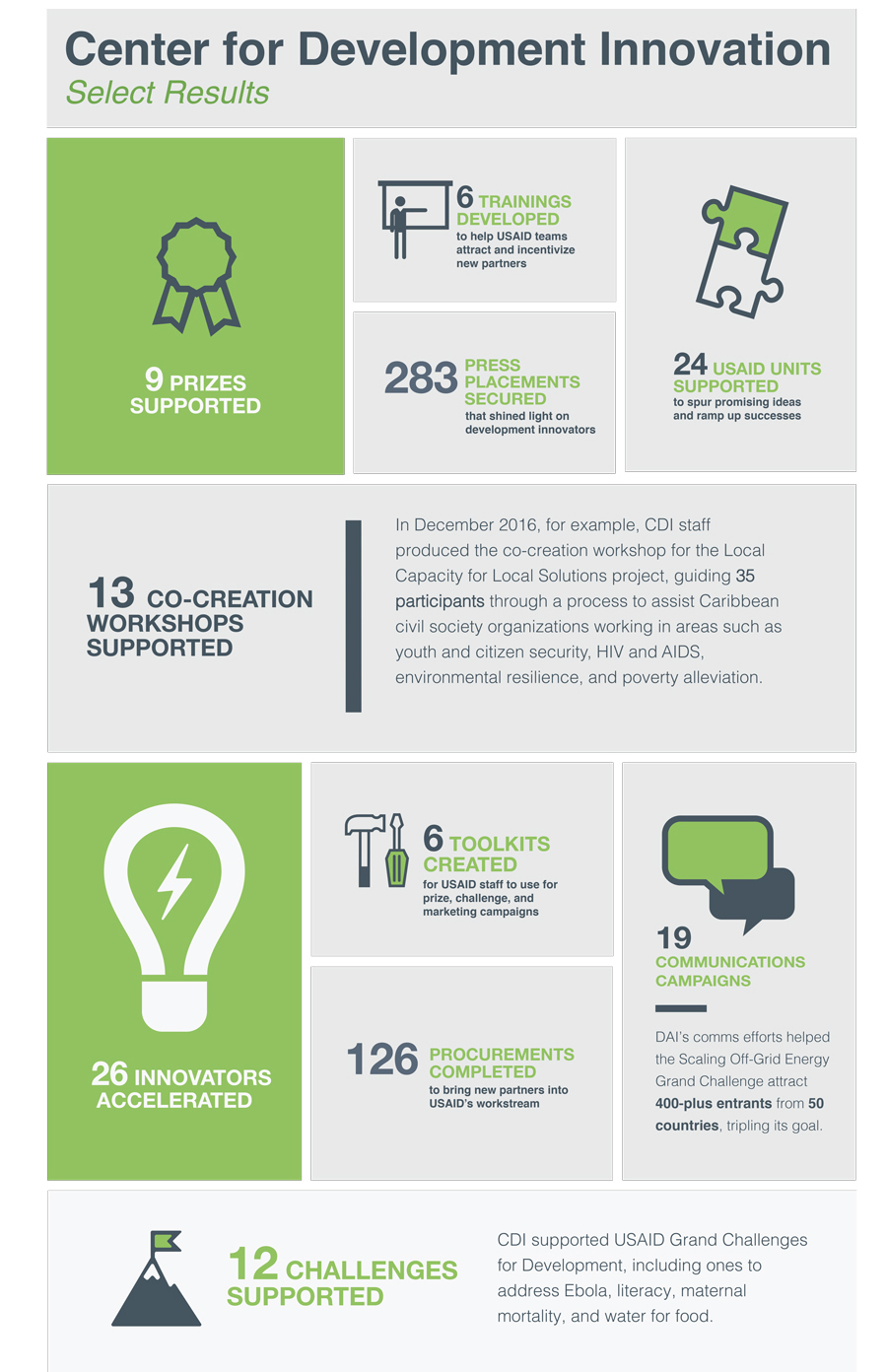 The CDI contract itself was an innovation. USAID launched the U.S. Global Development Lab to produce development breakthroughs using science, technology, innovation, and partnerships, but the Lab had no mechanism for welcoming new partners and their ideas and resources into USAID’s workstream.

USAID created the CDI contract to be that matchmaking and contracting mechanism. But CDI’s management would have to pay for itself, funded entirely by “buy-ins” from USAID units. Working out of rented space in Washington, D.C., DAI’s CDI management team carefully managed a small amount of start-up funds until the CDI started winning buy-ins. The first buy-ins were to assist D.C.-based Grand Challenges for Development such as Fighting Ebola, Securing Water for Food, Saving Lives at Birth, and All Children Reading. Soon, though, the first of 19 overseas clients reached out to CDI—starting with USAID/Indonesia, which sought support designing an activity to help smallholder farmers produce palm oil sustainably.

Partly as a result of CDI’s experience and example, buy-in based vehicles are increasingly viewed as viable mechanisms that can bring in the right partner at the right time for any given context, and help integrate new, nontraditional partners and approaches into USAID’s development work. Digital Frontiers—USAID’s program to promote and scale digital technology in its work—and the INVEST mechanism to mobilize private capital each adapt and deploy CDI lessons and systems in their own procurement mechanisms.

And innovation is now central to USAID activities. The U.S. Global Development Lab—along with USAID’s Bureau for Economic Growth, Education, and Environment and its Center of Excellence on Democracy, Human Rights and Governance—will be absorbed into USAID’s new Bureau for Development, Democracy, and Innovation. This new super-bureau will serve as USAID’S central resource for design support and technical assistance and is oriented to consult and serve other operating units, including by mainstreaming innovation and inclusivity.

The CDI project came at a critical inflection point in USAID’s trajectory. Over the course of its four years, the team worked alongside the agency to experiment with new approaches, test new solutions, and forge new types of partnerships. Looking toward this new era of enterprise-driven development and self-reliance, USAID has built a strong foundation in innovation, collaboration, and design, and the CDI team is proud to have played its part in that process.

Meredith Perry was the Program Manager on DAI’s Center for Development Innovation project.