In 2007, oil and gas was discovered off the coast of Ghana, leading to a boom in infrastructure projects and investment in the country’s Western Region, particularly in six coastal districts. Subsequently, large tracts of land have been taken over for the development of oil and gas infrastructure, businesses, pipelines, roads, and areas allocated for machinery repair. While this surge in activity has raised expectations for economic benefits among local communities, it has also spurred questions about resettlement and compensation, alternative livelihood and job opportunities, changes to land use, and food security.

Under such circumstances, it is critical that communities have a platform where they can voice their concerns, ask questions, and access accurate information about oil and gas investments and their implications for local people. Since 2014, such a forum has been available to them, thanks to the Ghana Western Region Coastal Foundation (WRCF), a U.K. Department for International Development-funded programme focused on ensuring that oil companies’ corporate social responsibility efforts are effectively promoting development, preventing conflict, and stimulating inclusive economic growth.

While WRCF funds a number of activities, its multi-stakeholder dialogue forum has proven to be one of the most successful. Local authorities, investors, and the oil industry participate to share their plans and expectations with communities, to promote accountability and transparency, and to foster the kind of positive relationships with constituents that favour smooth business operations. In 2016, after two years of conversations to bring together the various stakeholders in the Western Region, a Community Perception and Socio-Economic Survey found that decision making in WRCF’s target communities is indeed perceived as more inclusive now than in non-target communities.

How Did the WRCF Forum Come to Be a Trusted Convener?

The forum came into being after an initial assessment found that communities were not sufficiently organised to effectively present their concerns to government authorities and industry. By the same token, while government and industry had been involved in some consultations, these were not always well managed and their quality varied.

A key component of the dialogue platform is the Citizens Advisory Council, composed of representatives of oil and gas companies (Tullow Ghana Ltd. and Ghana National Gas Company Ltd.), communities (represented by nine senior chiefs and queen mothers), government (leadership of district assemblies, the Fisheries Commission, and the Environmental Protection Agency), and civil society (nongovernmental agencies and the media). This body summons actors who appear at a public session of the Council to respond to issues raised by communities.

But WRCF set out to make the multi-stakeholder dialogue process as extensive and inclusive as possible. To date, it has worked with 301 communities and recorded 1,263 issues raised by them, engaging more than 75,000 people in the process. The engagement begins at the very grassroots with household-level conversations conducted by volunteers, who collect these individual concerns for discussion at community meetings to identify common issues and prioritise the most pressing. Importantly, all the issues raised at the meetings are recorded, aggregated, and analysed, affording government and industry data-driven insights into the challenges facing residents of Ghana’s oil districts.

To create a comfortable environment for people to air their opinions, the volunteers who solicit information and the facilitators who lead discussions are recruited from the communities themselves. Residents are more at ease and confident with familiar faces and people who understand the context first-hand. Training local Ghanaians to drive the consultation process also strengthens local capacity and improves the chances that the forum will be sustainable after the programme comes to a close. Overall, WRCF has trained 1,550 volunteers and 24 facilitators across the six districts (Shama, Sekondi Takoradi, Ahanta West, Nzema East, Ellembelle, and Jomoro). 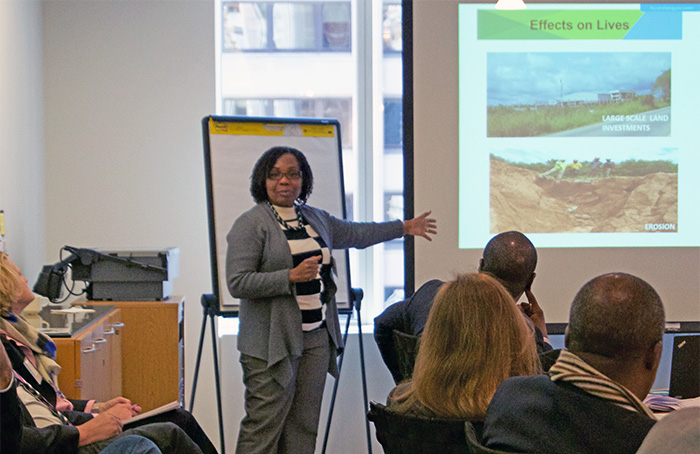 This training in turn allows active citizens to take on broader leadership roles. Communities now have people they can trust to facilitate community meetings, build consensus, and engage with the government and private sector around community needs. In Assuoko Essaman, for example, a facilitator appealed to a bank to help furnish a community health facility that had been defunct for two years. The bank provided GH¢5,000 for this purpose. Some graduates of the training programme have since been elected to serve in the local assemblies, and communities are collectively embarking on their own initiatives to address local challenges. In Beahu, for example, community members levied each other to rent a house for a health facility; in Asemko, they contributed to the construction of a permanent community meeting place.

Industry and government have been receptive to this new level of activism and communication. Local assemblies have included the concerns of communities in their district plans—to repair bridges and roads, for example—and companies are responding, too: the Ghana National Petroleum Commission expanded its scholarship scheme from four districts to six in response to concerns initially raised in the WRCF fora.

While a key function of the forum is to ease apprehension so that problems can be aired in a comfortable environment, it has also emerged as a venue to share positive stories whose retelling benefits communities and investors alike. For example, people who have been compensated for the loss of their land have shared with neighbours the practical steps they took to receive compensation and explained what worked well and what didn’t—a learning process helpful to both community members and investors.

While WRCF was not designed with a specific “land focus” in mind, it has inevitably encountered issues relating to land ownership, land value, and land use. Oil-driven growth has spurred a population spike in anticipation of jobs and other economic opportunities and a rapid increase in cost of living. Land traditionally used for agriculture—both commercial and subsistence—is now being repurposed, with implications for local livelihoods, food security, and environmental degradation.

The land obtained by investors is in most cases inhabited and these incumbent communities need to be treated fairly and respectfully. Issues of resettlement and compensation are sensitive and can lead to disputes and conflict within communities or between locals and investors, particularly if rights to land are unclear. Land rights issues are especially pertinent to women and other marginalised groups, who may lack secure land rights (be they ownership, use, or control) or may be unfairly excluded from compensation received.

Loss of traditional lands also has cultural and social significance for communities. And even if communities moved from their land are fairly compensated, there can be further issues relating to alternative livelihoods and skills development. In many instances, people previously engaged in rural livelihoods have relocated to urban areas, forcing a change in livelihood practices. While urban migration may not be a problem or unwelcome in itself, there may be problems if people lack sufficient skills or funds to pursue alternative livelihoods.

Of the 1,263 issues logged by WRCF in the community conversations, 49 were specifically related to land. With regard to compensation concerns, the Ellembele District—home to the Ghana Gas plant and its network of pipelines, new highways and access routes to the plant, and various mining or quarry operations—is the most affected. Some 14 percent of issues raised in Ellembelle relate directly to the livelihood concerns of community members who have seen their farmlands made over to oil, gas, and mining industries.

The Land Valuation Division and Ghana National Gas Company have appeared before the Advisory Council to explain delays in compensation for lands compulsorily acquired by government for the gas plant, assuring residents of prompt payments once lands are unencumbered and real owners determined by a court of law. All responses from government and industry are fed back to the communities, which has built a foundation of trust between communities and the WRCF. Although the programme may not be able to solve every land and compensation dispute in all its intricacies, it has at least connected communities to those responsible for addressing their issues, and it has provided companies with data to inform their interventions.

The oil and gas industry certainly appreciates the intermediary role that WRCF plays in relaying information from industry to communities and vice versa. Looking to the future, oil and gas companies may wish to take advantage of the data WRCF has collected by means of the multi-stakeholder forum and its grassroots community engagement. This data cuts across communities and districts in the Western Region, and it holds the promise that a systemic, collaborative approach focused on crosscutting issues—as opposed to each company limiting its interest to communities affected by its own operations—may yield wider development benefits across the coastal districts.