Known collectively as “Kuchi,” the nomadic peoples of Afghanistan recently convened in Kabul for a historic assembly to address longstanding issues specific to their community.

The National Conference on Kuchi Affairs, sponsored by the Assistance to Legislative Bodies of Afghanistan (ALBA) project, afforded Kuchis access to Members of Parliament, the President’s Special Representative on Reform and Good Governance, and officials from numerous ministries and directorates. Never before has any state or international body brought together this disparate community. 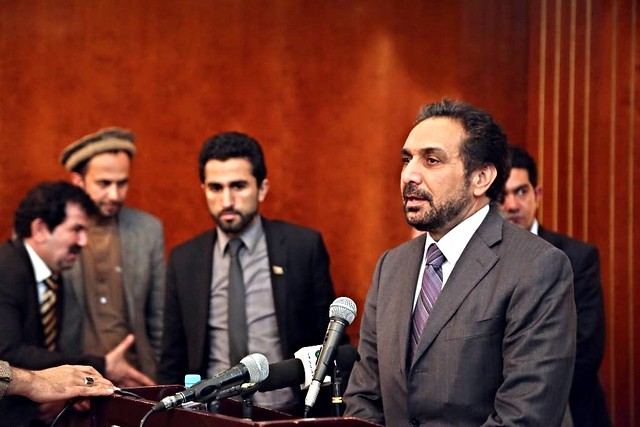 Building on the high level of trust and cooperation established with Members of Parliament and Senators, the ALBA project—which is co-funded by the U.S. Agency for International Development and the U.K. Foreign and Commonwealth Office—helped coordinate the conference at the request of the Lower House Commission on Nomads, Tribal Affairs, Refugees, and Migration.

Logistics for the event were challenging. Almost 300 Kuchi representatives traveled to the three-day conference from 31 out of 34 provinces. Accommodated in downtown Kabul hotels, some nomads were unused to amenities such as running tap water. Others were concerned about animal herds left near the outskirts of the city. Hailing from the far corners and varied landscapes of Afghanistan, the Kuchis comprise several linguistic, tribal, and ethnic affiliations, but once assembled in the hall, a palpable sense of unity extended throughout the gathering.

Making up at least 10 percent of the Afghan population, the Kuchis are a widely recognized but little known group, and have historically eschewed politics. Mainly Pashtun-speaking, most Kuchis have not benefited from the modest gains many Afghans have come to enjoy over the past decade.

A dozen Kuchi representatives sit in Afghanistan’s two Houses of Parliament, and a Lower House commission, an Independent Directorate, and a Ministry are specifically tasked to administer tribal and Kuchi affairs. Despite this representation, the nomadic community has felt largely ignored and often disparaged. Stop-go government activity and services have been common in recent years and these inconsistencies have had greater impact on groups who find themselves on the margins of society.

The Kuchis came to the capital to work seriously on resolving such problems, not just voice complaints. Many spoke expressively during the assemblies: “Consult with us. Ask us what we need; what our requirements are. Don’t guess.” In various ways, this sentiment was aired repeatedly over the course of the event.

While Kuchis are in certain ways outside the mainstream, their concerns— education, health care, security, land rights—echo those of many Afghan citizens. Factor in the main Kuchi livelihoods, based on livestock products and animal grazing, and the ministerial and parliamentary panel received a clear profile of the Kuchi constituency.

Participants were divided into breakout groups to discuss health, education, livestock, housing, livelihoods, and governance. Inadequacies emerged in several arenas. In most provinces, for example, there are no health centers appropriate to the Kuchi consumer. Government-run mobile clinics are erratic and often give no prior notification of their visits to the community. Mobile schools, likewise, are hindered by poor management and scheduling.

Finally, governance and social issues are yet to be addressed. A legacy of discrimination—many Afghans still see Kuchis as criminals, even terrorists—contributes to a significant under-representation of nomadic people in the public sector, especially in the police, military, and national security forces. Many nomads have been unable to receive national ID cards.

Close to 300 voices joined in solidarity to outline these formidable barriers in a formal policy paper presented to the President. The paper lays out province-by-province plans to address inequalities and calls for the formation of a Kuchi National Council, plus increased oversight of Article 14 of the State Constitution, which pertains specifically to agriculture, animal husbandry, and nomads. It also harkens back to the presidential campaign promise to initiate sustainable solutions for Afghanistan’s nomadic community.

The ALBA project is designed to help the Afghan Parliament provide a stronger, more consistent check on the executive branch and operate as a more independent and effective legislative, representative, and oversight body. By integrating constituents who have for too long been kept out of the mainstream, by forging new ties to legislators, and by making clear demands of the government, the Kuchi conference advanced that objective.