With the departure of U.S. forces from Afghanistan scheduled for this fall, all eyes are turning to the peace process, and in particular the place of women’s rights in those negotiations. With those rights in mind, we spoke to Sara Seerat, a leading women’s rights activist recently appointed by presidential decree as Senior Advisor to the High Council of Women in Afghanistan’s Ministry of Women’s Affairs.

In recent years, Seerat has worked closely with Musharikat, a U.S. Agency for International Development-funded project that has built a cadre of more than 7,000 activists and 370 civil society organizations across all 34 provinces of Afghanistan to advance women’s equality and empowerment. Musharikat works through its coalitions for Women in the Peace Process, Women in the Political Process, and Gender-Based Violence.

In the coming months, Musharikat’s peace activists will be especially busy with the impending peace conference in Turkey, where the participation of leading Musharikat women’s rights activists, such as Seerat, is critical for the preservation and expansion of women’s rights in a post-peace process Afghanistan. 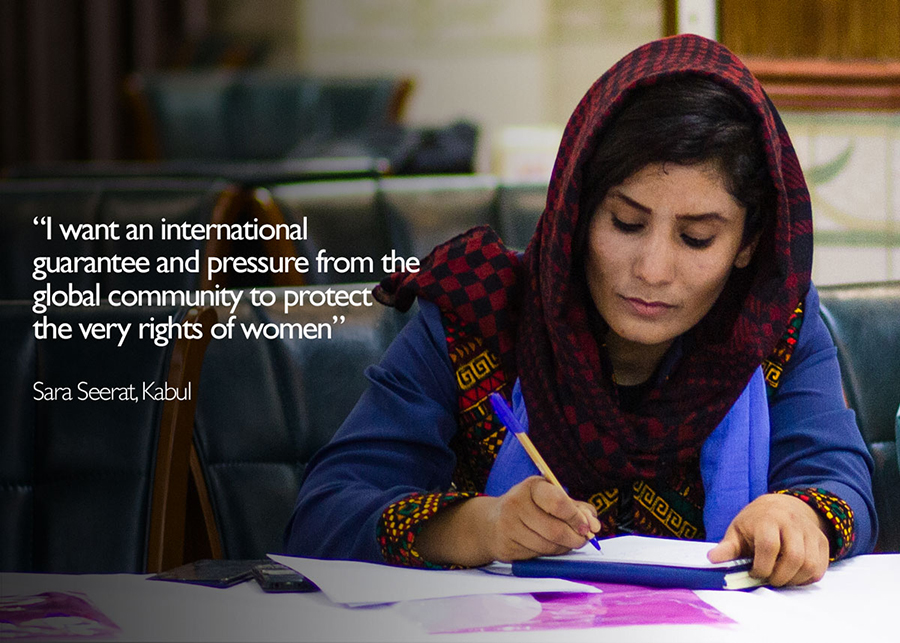 “Peace means freedom,” said Seerat, “the right to study, to work, and to participate in elections, and the ability to exercise our due rights.” Since 2017, Seerat’s mission has been to work for women and girls—raising trust in their own abilities and building their capacity and confidence to participate fully in all aspects of society. She has become a master trainer in persuasion, leadership, and advocacy, delivering training on these topics to more than 300 Musharikat coalition members in Parwan, Kapisa, and Panjsheer.

With the project’s Women’s Political Participation coalition, she was involved in the observation of the September 2019 national elections. To combat gender-based violence, she has been part of school-based awareness-raising activities for anti-harassment committees and has spoken in Musharikat-supported radio roundtables about access to healthcare, harassment of women and girls, gender-based violence, and the importance of women’s inclusion in the peace process.

Seerat’s objectives as Senior Advisor to the High Council are uncompromising. “My personal goals are to support advocacy for women across the country, providing a platform for women from each of the 34 provinces to share their demands, to solve their problems, and to involve them in national decision making with the government,” she said.

“In my official capacity, I will be supporting government plans while also exploring the ways in which the ministry can help women to achieve more roles in their respective provinces, especially with respect to the directives of the central government. In this way, we’ll have women helping other women to solve their problems, especially those that relate to government services and intervention.”

In December 2020, Seerat was awarded the Franco-German Human Rights Prize by the French and German governments. True to her principles, she is determined that human rights will remain at the center of the peace process.

“My red line concerns the second chapter of the Afghan constitution, which details and embraces women’s rights, their involvement in society, and rights to education and healthcare,” she said. “I want to see maternal mortality and morbidity decreased. So many mothers are losing their lives due to the insecurity across the country as they are not able to visit clinics for the medical care they need. My other red line for peace is that I want an international guarantee and pressure from the global community to protect the very rights of women.”

Tiffany Tsang is a Communications & Outreach Specialist for the Musharikat program.