It is hard to believe in the wake of the past few decades that 1960s and ’70s Afghanistan was relatively progressive for women, with many women and girls freely attending school, working professionally, and dressing fashionably. Since the 1990s, warlords and, later, the conquering Taliban subjugated females—forbidding girls from going to school and women from working.

That tide of exclusion has been receding, if slowly. Thanks in part to outside assistance, Afghanistan’s female population is re-asserting its self-esteem. Modernization is picking up in the country’s main urban centers, where young women increasingly seek to enter the workforce and make their mark. To protect and build on these gains, the U.S. Agency for International Development (USAID) Promote: Women in the Economy (WIE) activity, implemented by DAI, is teaming with hundreds of Afghan employers and the Afghan government to integrate aspiring professional women into the mainstream economy. 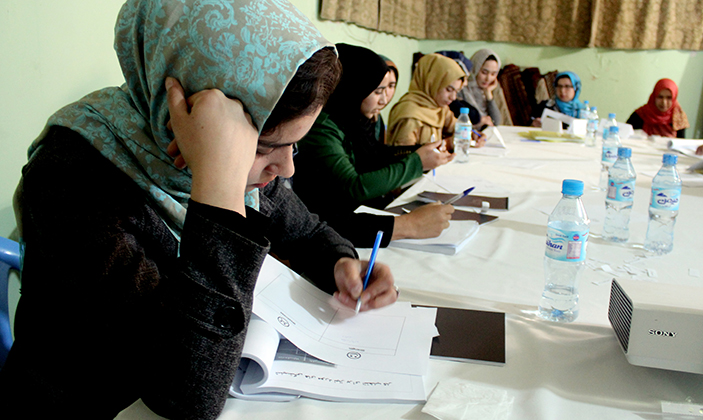 When WIE launched in July 2015, Afghanistan had scant employment opportunities for professional women. The WIE team has since established operations throughout the country and placed nearly 4,000 female interns in 600 businesses.

One of the world’s youngest countries—nearly two-thirds of the population is under age 25—Afghanistan sits poised on the verge of youth-fueled growth. Each year, more than 100,000 female secondary graduates sit for the national Kankor exam, and about half enroll in Afghan universities. With no memories of the “good old days” for women, they are resolved to chart their own course. 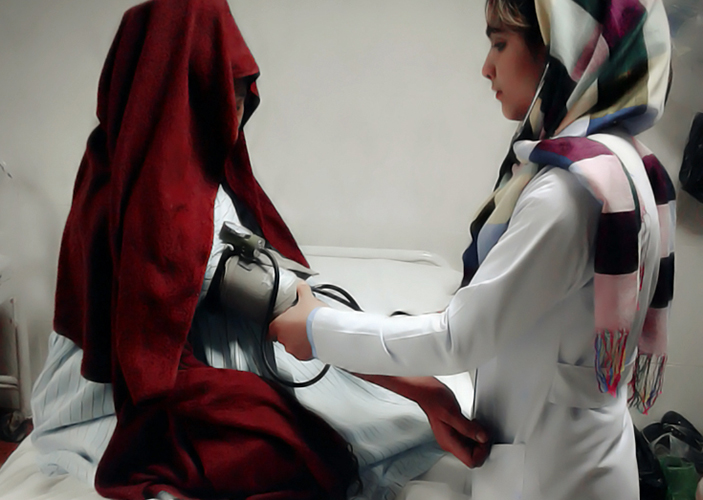 Demand in Health Care, Education, and Beyond

The WIE team knew that young women would not quickly be accepted into many Afghan workplaces. While strides have been made in Afghanistan—including 3 million girls enrolled in schools and 62,000 in public universities since 2001—many educated women still struggle to get hired. Most would be the first female in their family to work outside the home; for many employers, it would be their first female hire. Both sides were ill-equipped to change. While the handicraft/carpet sector is dominated by women, with plenty of organizations helping the illiterate crafters, WIE’s remit was to assist educated Afghan women into the professional mainstream.

Afghanistan suffers from 40 percent unemployment as well as a shortage of qualified job seekers, so we dedicated part of our first year to analyzing regions and markets to identify which job sectors lacked qualified or certified recruits. WIE found that education and health care—teachers and nurses—headed the list to the point where even very conservative locales were open to employing women in these fields. Strong demand for qualified hires also emerged in media, banking and finance, retail, and information technology.

A Foot in the Door

WIE blanketed the country to establish entryways into the workforce by hiring provincial internship and apprenticeship coordinators in 30 of Afghanistan’s 34 provinces. These coordinators, many of whom work in remote locations, receive support from full complements of staff working out of five regional offices—in Kabul, Jalalabad, Kandahar, Herat, and Mazar-i-Sharif. The WIE team and activities go where other donor-funded projects do not operate.

In identifying the skills gaps as well as job growth and placement potential, WIE cultivated and vetted a roster of training institutes across the country, with which we developed curriculum and certification courses under WIE’s Forward Together brand. Upon acceptance into the internship and apprentice program, young women enroll in Job Readiness Training, a 20-hour workshop where we coach them in resume writing, job interviewing, business communication, personal financial management, work ethics, and combatting potential harassment. 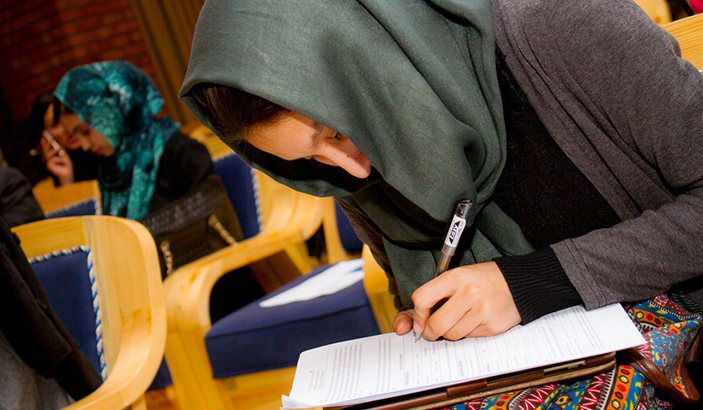 Our knowledge management portal tracks each intern as she moves through training, interviews, and internships. Each intern is paid through a cost-share arrangement between WIE and the employer, receiving stipends monthly via a mobile money system. Of the nearly 4,000 young women placed so far, more than 400 have graduated to full-time employment.

Forward Together scholarships help women who have at least a high school education gain specific technical skills. WIE vets all training facilities—there are many in Afghanistan—to ensure their services and certifications are acceptable and demanded in local markets. Where no local facility is available, WIE works with local and international grantees to provide training in sought-after skills. WIE currently provides a curriculum in information technology and health care, and our curriculum will grow, diversify, and develop.

WIE understands safety and security concerns when a daughter, sister, or wife goes out to work for the first time. We vet potential host companies and require they provide separate bathrooms and prayer areas for women and exhibit cleanliness and professionalism. Offices must be located in safe areas, as interns are responsible for traveling to work.

Throughout the internship, the coordinators consult the intern and host company to ensure interns are learning valuable skills, interacting and learning from colleagues, and contributing to the business. Approximately 10 percent of WIE interns have gone on to full-time placement with their host company or elsewhere. 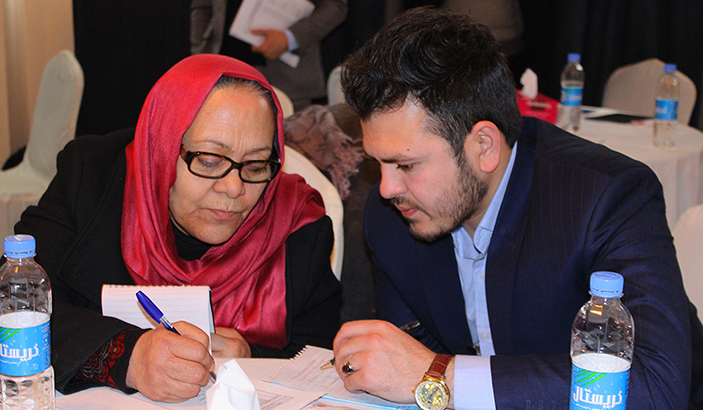 Finding truly women-owned businesses in Afghanistan is not easy, although there are some, notably in Kabul. So WIE also assists businesses with workforces of at least 10 percent women to perform better and increase revenues and sustainability. Vetted local business service providers provide much of the assistance in areas such as marketing and accounting. WIE is preparing a mini-grant system that will allow many more companies to afford these business services.

USAID’s innovative Master of Business (MBA) Corps program demonstrates the value of trained managers to small-business owners, some of whom cling to traditional practices. So far, WIE has matched MBA graduates with 21 client businesses in Kabul, with the MBA Corps soon to roll out regionally. Under a six-month agreement, WIE consults with the student and host business to ensure each is bringing value to the other.

Many business owners in WIE’s target market—women, plus male owners with at least a 10-percent female workforce— are unaware of the financing available to them. WIE assists client businesses in choosing and applying for small, appropriate loans. To date, WIE has facilitated 17 loans totaling AFS 4.9 million (US$74,000) for small businesses in the provinces of Kabul, Herat, Balkh, Nangarhar, and Kandahar. WIE and the Afghanistan Microfinance Association manage the Microfinance Institute Training Program that so far has placed 64 young women—future loan officers, cashiers, and bankers—within lending institutions in Kabul, Herat, and Mazar-e-Sharif. WIE has also hosted more than 100 businesses at Access to Finance Matchmaking Roundtables that pair potential borrowers and lenders.

Profile of Businesses Served by WIE

Potential entrepreneurs and startups face myriad challenges beyond providing a product or service, including finance, human resources, marketing, and supply chain issues. WIE’s two business incubation centers in Kabul are assisting 35 startups that are women-owned or employ 10 percent women, providing administrative assistance to help these young companies get off the ground and eventually learn to implement these activities for themselves. These incubators are key to turning job seekers into job creators, generating jobs and wealth, boosting productivity, creating competition, and bringing innovative products and services to the market. 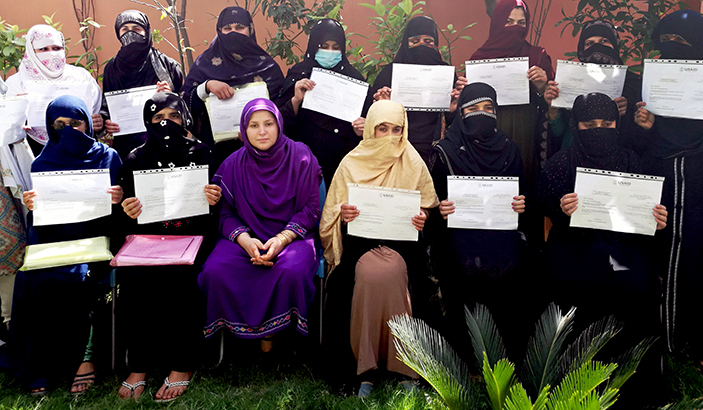 Advocating for Women in the Economy

The WIE Technical Working Group includes members from Afghanistan’s government, education, workforce development, and private sectors who support women’s involvement in the mainstream economy. Currently, the group is working to build awareness and support of the Women Legacy and Inheritance Rights Policy, a compilation of the economic rights guaranteed to women by Islam under Sharia law.

These rights include access to property, land, cash, inheritance and mehr, a mandatory payment promised by a groom or groom’s father that legally becomes the bride’s property. In collaboration with Ministry of Hajj and Religious Affairs, WIE is developing this policy and a national action plan to teach religious leaders, women’s rights advocates, civil society, and legal associates in rights to legacy and inheritance, making it easier for women to inherit property and gain access to finance. The group is also supporting administrative procedures to enforce legal practices and mandate marriage registration. Finally, WIE is rolling out a nationwide gender awareness program, designed to highlight the importance of all Afghans’ contributions to their society and economy. 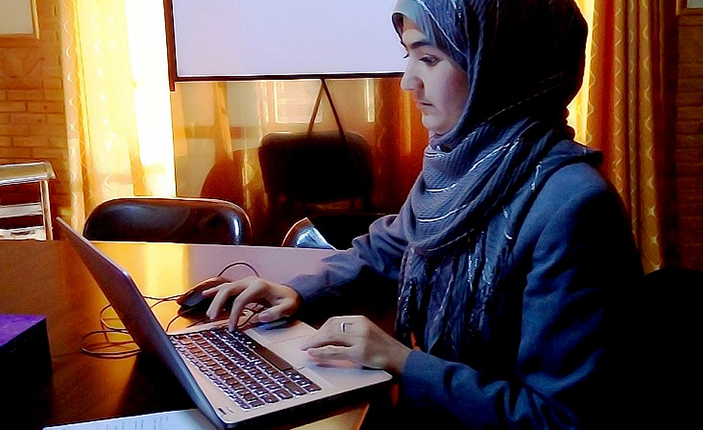 Afghan villages have always been deeply traditional, and even today many do not have internet connectivity or even electricity. They juxtapose against major cities Kabul, Herat, and Mazar-i-Sharif, where information technology is blooming and a number of good universities serve the rising generation. In between are numerous small and midsize cities working to improve services for their residents.

The WIE activity, part of USAID’s Promote initiative to empower Afghan women, has two years remaining. Our team is confident that in concert with our partners we can bolster women’s inclusion in Afghanistan’s economy and further ensure that the progress made by Afghan women over the past decade endures and advances for the benefit of all Afghans.