Imagine the difference electricity would make to a village where every night the street and homes go dark because there is no choice.

In Dodarek, 30 miles northeast of Jalalabad in eastern Afghanistan, electric lines now snake throughout town. Its six shops stay open after dark—one has a freezer and sells cold drinks and frozen foods. Most of the village’s 150 homes now have access to electricity, and in some of these dwellings, women embroider clothing by night, then sell it by day.

Two years ago, DAI opened a microhydro plant in Dodarek powered by a stream that runs through town. That plant continues to deliver precious electricity; this article shares some of the insights we have gathered along the way.

The Dodarek project was conceived by Afghan experts, and after technical and economic viability surveys it was designed by Afghan engineers working for our Alternative Development Program/Eastern Region (ADP/E)—a U.S. Agency for International Development project that ended in 2009. The microhydro components were manufactured in Lahore, Pakistan.

Local residents provided labor and locally available construction materials such as sand, gravel, and stone, and they learned how to maintain the plant. ADP/E engineers and managers engaged Shura members to respond to the community’s interests. (Shuras are small local councils, or consultative committees.) On April 6, 2009, members of the Dare Noor District Development Assembly, elders of Dodarek village, and representatives from ADP/E gathered to open the 60-kilowatt power plant driven by the stream. The plant cost roughly US$107,000—including $17,000 for local labor—to engineer and build. The community donated the land and some of the labor for the forebay, land for the microhydro plant, and 100 percent of the local materials, as well as delivery and installation of wires and poles.

The turbine is a cross-flow type—meaning only a portion of the water from the stream is diverted through the turbine. Sometimes a small amount of water storage is required to ensure consistent flow and power production. Energy harnessed from the stream provides electricity for the 150 households in Dodarek, Dodailak, and Gorkhal villages, an area of 2.5 square kilometers. 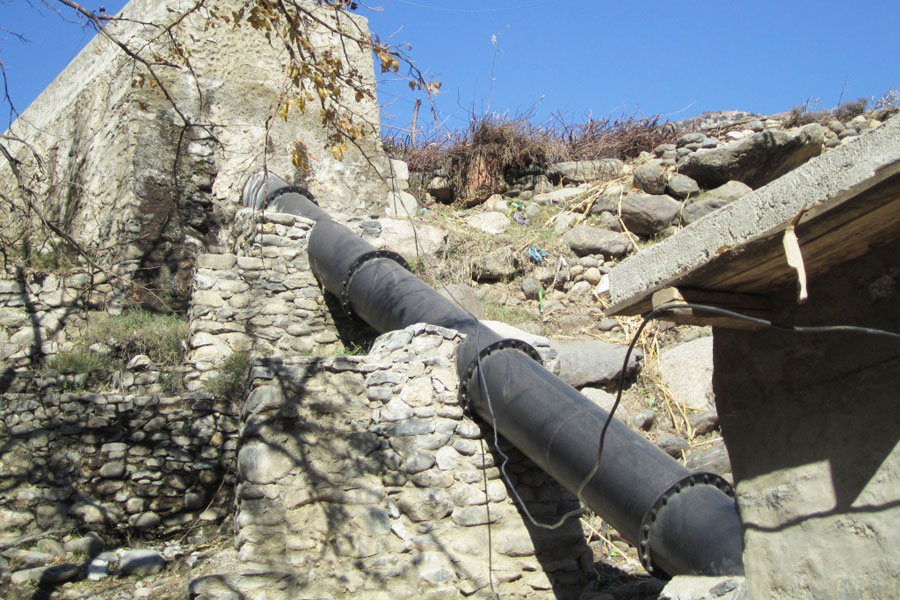 However, there is sufficient water to power the 60-kilowatt dynamo only nine months of the year, so from November to January the plant runs on a smaller dynamo recently installed by the community, adequate only for lighting during these three months.

“The plant is designed and built in compliance with international standards for microhydro power,” said Ziauddin Zaib, an engineer and microhydro expert in Jalalabad. “I expect the life of the plant to be 40 years.”

Dodarek is a typical rural village in eastern Afghanistan, very poor with limited irrigated land. Though the mountain stream running through the village is only a few feet wide, its water is powerful. When presented with the microhydro proposal, villagers committed to it. Three participated in a one-month training in Jalalabad to manage the plant and address electricity problems in the village.

To maintain the plant as a business, the Shura members trained on managing the plant technically, financially, and operationally. A small number of regulations govern the cost of electricity and other basic requirements for service. Customers sign forms agreeing to the rules when they receive service, and meters are installed for each house and business to calculate the electricity consumption.

Households are charged 3 Afghanis per kilowatt-hour, while businesses are charged 7 Afghanis per kwh. Funds are collected monthly through the village Community Development Council and used for maintenance and the salary of the main plant operator. The council, officially recognized by the Ministry of Rural Rehabilitation and Development, operates under the district development assembly. If revenue exceeds regular expenses, the council can allocate funds for other projects in the village, though that rarely happens. In fact, villagers pay additional funds if the amount collected is not adequate to cover costs. The village is not currently collecting funds to replace the plant after the end of its useful life, though it did take the initiative to install the additional smaller dynamo to provide power when water flow is reduced.

More than 160 microhydro plants have been installed in Afghanistan in recent years, including by ADP/E’s successor program, the Incentives Driving Economic Alternatives for the North, East and West (IDEA-NEW) project. The National Solidarity Program and the United Nations Drug Control Program have built 10-kilowatt plants to provide lighting for rural villages.

DAI has learned several lessons from our own projects (see box above), confirmed in observing other microhydro projects in Afghanistan.

Most importantly, to operate the plant as a business, a strong committee must be established with members from all beneficiary tribes. It should be trained on how to allocate electricity and how to collect payment for power used. If possible, the electricity rate should be set to cover more than the normal maintenance and operations to provide funds for extraordinary maintenance costs and future replacement.