Driven from their land by a despot bent on retaliation, the Marsh Arabs of Iraq had little choice but to abandon the wetlands that were once home to billions of birds, a source of fish and dairy products for much of the country, and a natural filter for the waters of the Persian Gulf.

When Allied forces entered Iraq in 2003, the marshes were only 7 percent of their original size, having been drained by Saddam Hussein in the wake of the first Gulf War. The population had dwindled to 125,000.The Marsh Arabs had been persecuted, forced into exile or pushed into the drained and desiccated lands on the margins, and left with scant services, no access to the marshes, and a broken economy.

In 2003, we were granted the opportunity to restore these marshlands under the U.S. Agency for International Development (USAID)’s Iraq Marshlands Restoration Program (IMRP).

Working closely with Marsh Arab tribes, we were able to train provincial government employees and university staff to apply the fundamentals of marsh restoration and wetland management; identify a cadre of veterinary graduates, previously unemployed, who have experience working with livestock directly in marsh villages; and demonstrate the potential of a complex, multidisciplinary USAID program led and operated exclusively by Iraqis in-country, and cited by the Department of State as a model for others in sustainable development.

Even during the most dangerous periods, our IMRP team was active, never ceasing operations or visits to the marshlands from Basra, despite great personal risk.

At the national level, the program developed the first hydrologic model for the Tigris and Euphrates river basin, established a marshlands monitoring system, re-established water and soil laboratories in the Ministry of Water Resources in Baghdad and at the University of Basra, and helped the government articulate a comprehensive marsh restoration policy.

Today in southern Iraq, the majestic wetlands are returning. Fish have been restocked, and date palms, barley, and sorghum flourish. Approximately 58 percent of the marshes have been re-flooded, and wildlife has begun to return. And work in the marshlands continues. Iraqi scientists have taken over some of the program activities and are continuing the effort to bring the marshes back to life. 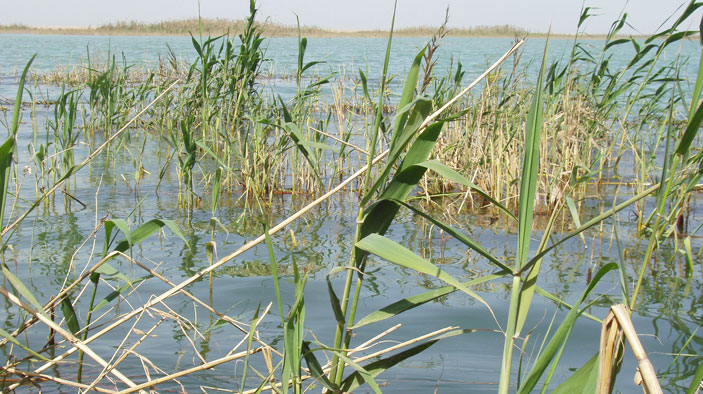 To cite a few examples of IMRP’s quantifiable achievements, the program:

Who are the Marsh Arabs?

In little more than a decade, beginning in 1991, Saddam Hussein’s regime destroyed one of the world’s largest wetland ecosystems. This environmental disaster has been compared in scale to the drying up of the Aral Sea and the deforestation of the Amazon. The area—roughly 20,000 square kilometers of marshlands in southern Iraq—is nearly twice the size of the original Everglades.

The indigenous marsh dwellers, the Ma’dan, popularly called the Marsh Arabs, have a culture at least 5,000 years old: images of their reed houses appear on Sumerian clay tablets. The Marsh Arabs may have numbered half a million in the 1950s, although that number dwindled as many left to seek better opportunities in the cities. At the end of the Gulf War, a populist Shi’a uprising brought down the full and brutal weight of the Baghdad regime on the Shi’a. The marshes had become a haven for the rebels, so the military raided settlements and burned the reeds, destroying the core of the local economy.

They killed tens—maybe hundreds—of thousands of Marsh Arabs and forcibly moved the survivors from site to site. Many ﬂed to Iran and Saudi Arabia, and although nearly all returned to Iraq in fall 2003, the population in the marshlands today is probably no more than 150,000.