Girls and women in Afghanistan are transitioning away from Taliban-era oppression to attend school, get jobs, and fully participate in mainstream life. Afghan leaders and politicians have enacted national laws to support this movement, but the reality in Afghanistan’s 34 provinces is another matter. Girls and women in too many locales routinely endure child/forced marriage, domestic assault, and injustice, and female leaders become targeted for reprisals. In the space between the national law and local reality, various groups are working to preserve hard-earned gains and advocate for Afghan women. This is the space where the Musharikat program works. 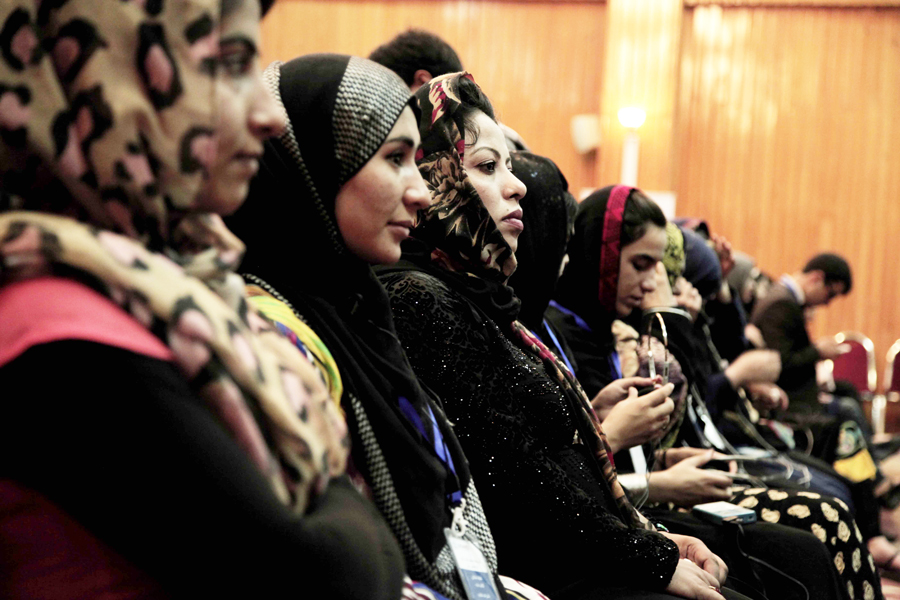 Part of the U.S. Agency for International Development (USAID)’s Promote initiative, Musharikat is building an inclusive network of women’s rights groups across Afghanistan that aims to become a permanent advocate for laws, practices, and public perceptions that affect women’s lives. In the past three years, Musharikat has enlisted 330 organizations and 2,200 women and men in eight issues-based coalitions: Violence Against Women, Access to Education, Access to Economic Opportunities, Women’s Political Participation, Access to Justice, Access to Healthcare, Women in the Peace Process, and Anti-Harassment of Women and Girls. These coalitions are now building support both nationally and in communities for their respective causes.

Among its results, Musharikat has: 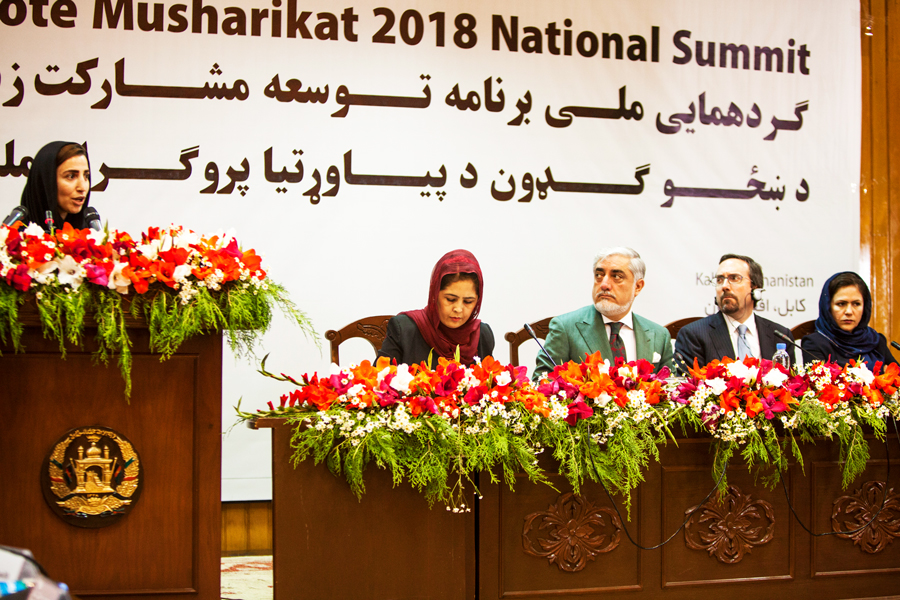 In June 2018, coalition leaders convened at the second Musharikat National Summit in Kabul, where John Bass, the U.S. Ambassador to Afghanistan, told attendees: “Simply creating new laws does not result in changes to the daily experience of Afghan women. Just having laws in place is not enough; they have to be implemented and executed” for women and society to benefit.

Headquartered in Kabul and operating regional offices in the country’s north, south, east, and west, Musharikat—which means “partnership” or “participation” in Dari and Pashto—practices “learning by doing” with Afghan women and men applying their advocacy skills face to face in meetings with elders, mullahs, parents, officials, and other influencers, and on radio and television.

The Musharikat network has trained 4,900 people on the law and women’s rights and hosted awareness-raising sessions with 9,300 more, including youth, community leaders, religious leaders, students, and teachers. 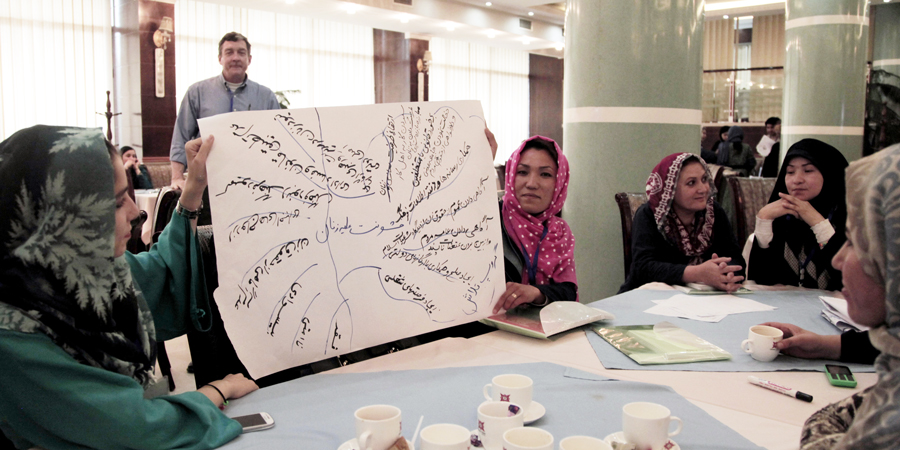 In the 1960s and ’70s, Afghanistan was relatively progressive for women, with many women and girls freely attending school; since the 1990s, warlords and, later, the conquering Taliban subjugated females and banned girls from going to school. The country is slowly recovering from that oppression with assistance from the Musharikat coalitions.

The Access to Education Coalition is advocating to increase the number of women teachers hired to staff girls’ schools, especially in rural areas where there are shortages of teachers, with coalition members appealing to the Ministry of Education and Independent Administrative Reform and Civil Service Commission to reach a solution.

To inform these efforts, coalition members recorded the number of women teachers in their locales and created lists of potential women teachers, which they shared with ministry officials in Kabul. At the coalition’s request, the Ministry of Education in July sent to all provinces a letter directing them to allow coalition members to observe and report on teacher candidate testing, a process historically fraught with corruption and mismanagement. Coalition members have since visited education departments in more than 20 provinces, and before year’s end the coalition will summarize what it observed and present findings and formal recommendations to improve future testing to senior ministry officials. 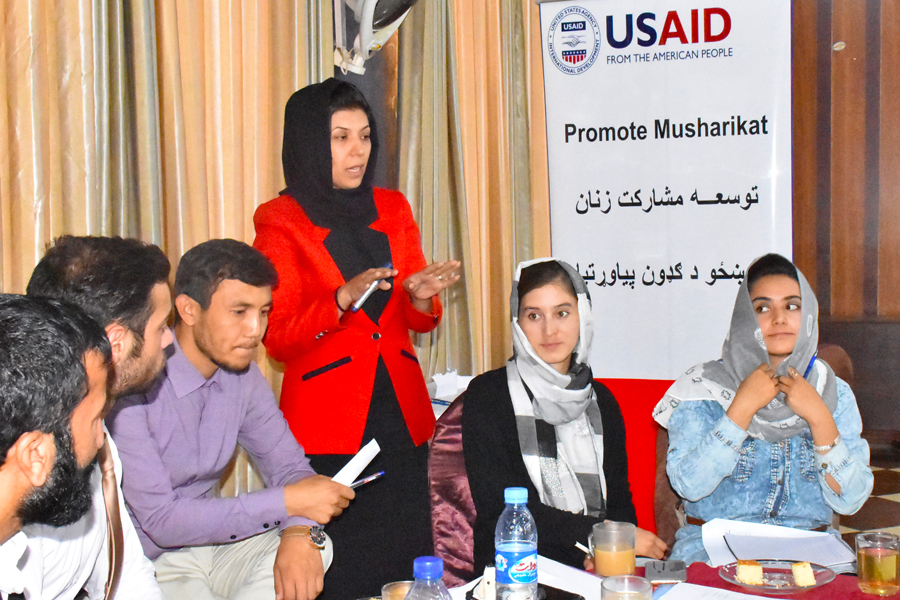 Girls in the Kama district of Nangarhar province were being harassed so much by boys on the way to school that their families decided to keep the girls home. The Training Human Rights Association for Afghan Women—a Musharikat grantee and founding member of the Access to Education Coalition—met with Afghan officials, local community elders, and influential mullahs. Once everyone understood the problem, the group decided that first the elders would talk with the parents of the misbehaving boys. At the same time, the mullahs would deliver Friday sermons directly addressing the importance of girls’ education and the community support that girls need.

As a result, 23 girls from the Kama district resumed attending school. “I am pleased that I have been able to support my daughter,” reported one of the girl’s fathers. Kama district school principal Mr. Shafiullah noted a “great change regarding girls’ harassment in the district,” and he sees a large increase in the number of girls enrolling. Similar impacts are being made throughout Afghanistan.

Afghanistan’s sporadic elections process was halted completely by Taliban rule until 2004; since then, voting for provincial and national representatives has been uneven and frequently impossible for women. The Women’s Political Participation Coalition is working to change that. 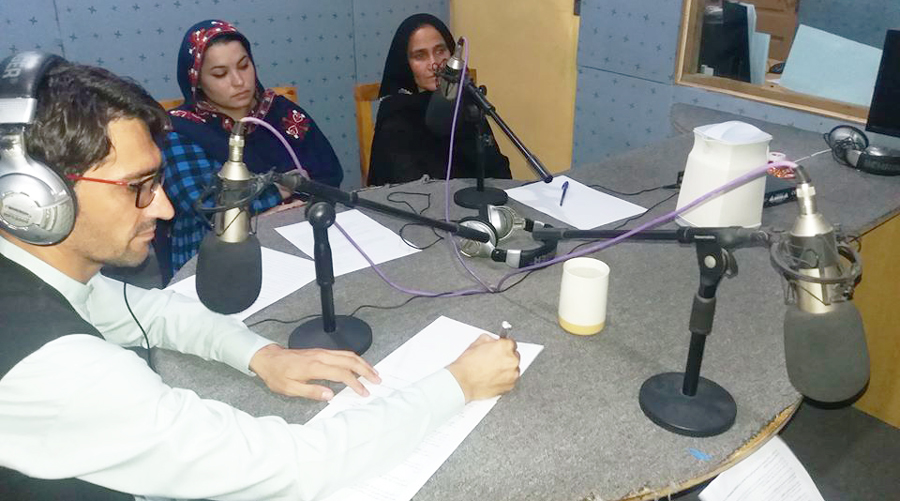 In her 6th district of Faiz Abad City, Badakhshan, a woman named Hasina wanted to increase women’s participation in the 2018 elections. After talking to neighbors and going door to door, she found 62 women who did not have Tazkiras—the ID cards necessary for registration. Hasina met with the provincial Population Registration Department, which asked her to gather the women in one place so the department could deploy a mobile team to issue Tazkiras. Hasina, a teacher at the local Faizabad Teacher Training College, secured a meeting room there, and staff from the college took advantage as well—in the end nearly 100 people received their Tazkira. Hasina continued her campaign and registered many more women in her district to vote, and shared her experience online via the Musharikat Knowledge Management Platform.

“What I did gave me strength and I learned that even one person can bring positive change,” Hasina told attendees at the June 2018 Musharikat National Summit. “I am now sure that every member of the [Women’s Political Participation] coalition across the country can bring this positive change.” 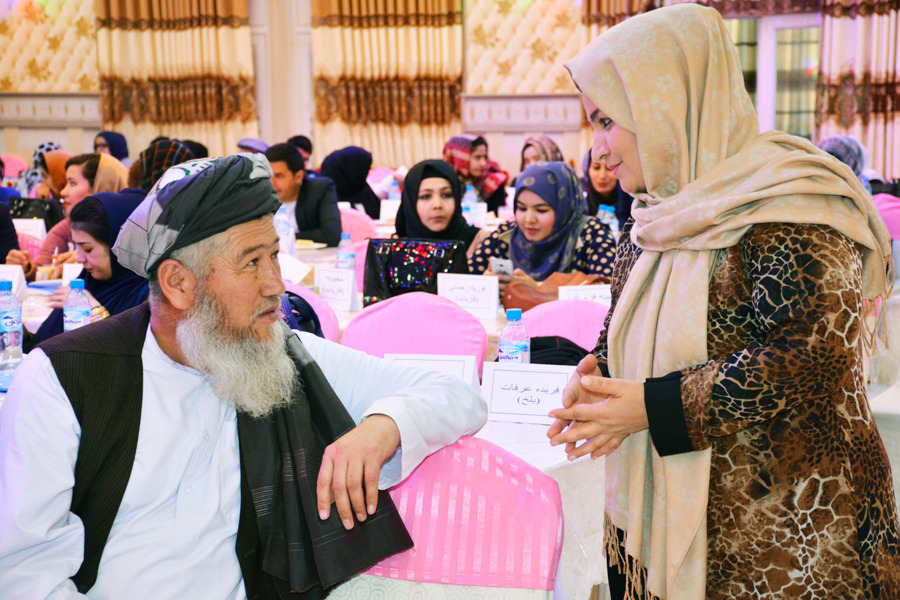 More than 150 coalition members met in June 2018 for the second Musharikat National Summit to set priorities for the next two years. Coalition leaders huddled with government officials vital to securing Musharikat’s gains and achieving future goals. For the first two days, coalition members analyzed their strengths and weaknesses, developed action plans, publicized Musharikat tools, and prioritized additional women’s issues for future coalitions. This collaboration yielded two—covering the Harassment of Women and Girls and Women in the Peace Process.

Preventing Child Marriage
Musharikat grantee Labour Spring Organization in Daikundi province worked with the Department of Hajj and Religious Affairs on the issue of child marriage. As a result, the department sent a formal Assurance Letter to all religious leaders in their district urging them to ban child marriage. Thirty-four local imams in Daikundi stepped forward and committed to supporting this initiative with their sermons and practices, and at least four child marriages have been prevented because the imams reported them to the police. These efforts are being supported by USAID Rasana project radio stations, including Radio Daikundi, which broadcast an interview promoting the ban on child marriages that reached 200,000 people.

On the Road to Self-Reliance

The Musharikat program is providing an outlet for a generation of women to become involved and contribute. It has already mobilized hundreds of women who have never been part of a movement, and many who were already fully capable now say they feel empowered to be part of a critical mass that will help Afghan women across the country. Musharikat has enabled 14,000 women to access training and worked with more than 120 Afghan government entities—local, provincial, and national—in planning and implementation. By project’s end in 2020, Musharikat expects to have enlisted more than 350 civil society organizations and 5,000 activists across all 34 provinces.

As the national government balances its promised pursuit of women’s equality with the day-to-day realities of elected office, it is crucial that women’s rights stay in the forefront of public consciousness. We intend that Musharikat’s advocacy coalitions will be a self-sustaining and continuous part of Afghanistan’s political landscape long after the project itself has ended.