By 2013, smartphone usage among Cambodia’s young people was booming in urban areas. Many users, however, could not text or express themselves in Khmer, Cambodia’s most widely spoken language. Their smartphone software did not readily support the Khmer alphabet, and the few add-on apps available were hard to use and unreliable.

At the time, I was living and working as a software engineer in Japan and heard about the Development Innovations (DI) project in Cambodia when it launched in August 2013. Not long after, I returned home to Phnom Penh, where one of my goals was to develop a keyboard app for the Khmer language. I found that working from home was difficult, and commented on Facebook that I was lonely. A friend replied, “You should come to the 5D Lab! There is plenty of room and lots of geeks like you.” I checked it out, and found my support network. 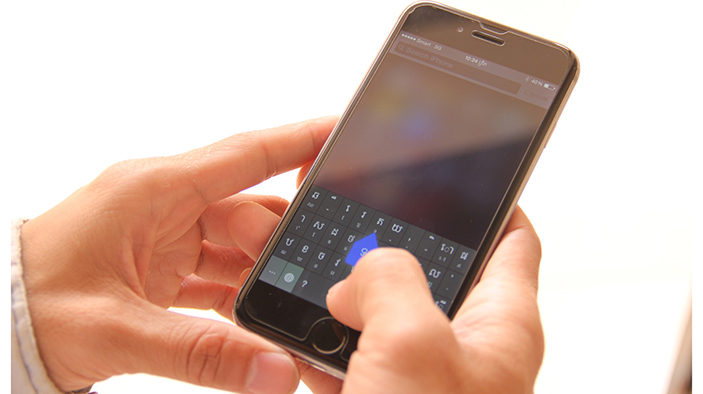 One year later, more than 300,000 Cambodian smartphone owners have downloaded my Khmer Smart Keyboard app and are texting easily in our native language. I developed the app and continue to upgrade it at the 5D Lab, a community space opened in Phnom Penh by DI, a three-year program funded by the U.S. Agency for International Development (USAID) and implemented by DAI. It turned out the 5D Lab was just what I needed—an innovation lab where techies could work on new projects using the lab’s computers, media equipment, and wifi.

When I started developing the app, many people were using Roman characters to type Khmer. This discouraged young Cambodians from preserving the Khmer alphabet, even though everyone speaks the language. My work immediately received considerable support because it was helping to fill this gap.

I launched the Khmer Smart Keyboard app for iOS phones in September 2014 and for Android phones in March 2015 at events well attended by young users and techies. It quickly became the most downloaded Khmer-language app in the country. Free to download from the iTunes and Google Play stores, it will help get a generation of Cambodians—at home and abroad—more excited about communicating online using the Khmer alphabet’s 33 consonants, 23 vowels, and 12 independent vowels.

The keyboard’s features include swiping down to get to the bottom character, left to delete, left and hold to delete continuously, and right to toggle between symbol mode and character mode. Initial testing showed users averaging 40 words typed per minute versus 28 words using previously available software that required toggling between screens to find Khmer symbols. 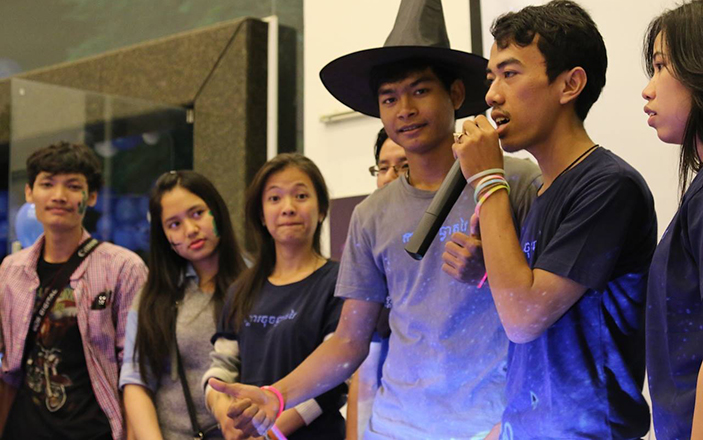 Providing a faster and more convenient keyboard will benefit Cambodian society, but continuous improvement is essential. An Open Institute report—“Mobile Phones and Internet in Cambodia 2015”— recommended that “in order to increase the speed of adoption, [we must encourage] the development of better text prediction and input methods for Khmer in phones.” With this objective in mind, I sought and won a $3,000 grant from DI—which was matched through a crowd-funding campaign and SMS fundraising support from mobile network operator Cellcard. I used this funding to develop the Android version and the word-prediction feature, which launched on October 31 (the Khmer Smart Keyboard’s 1-year birthday). Using data from 100,000 newspaper articles, the word-prediction feature predicts and suggests words that users intend to type, thereby increasing speed and decreasing spelling mistakes.

The app—winner of the 2015 Cambodia ICT Award presented by the Ministry of Post and Telecommunication—represents the innovative spirit at DI, a cooperative agreement between USAID and DAI designed to nurture a more tech-savvy, connected civil society in Cambodia. Working in the 5D Lab, I also connected with other potential clients, including the TOS Fund, a crowd-funding platform developed by the media organization Action IEC with funding from a DI grant and Cellcard, the country’s top mobile network operator.

I am now looking at ways to generate revenue to further develop this app, including by selling ad space within the keyboard and offering an add-in option for popular stickers to be used in text messages and online posts. These revenue streams will help us make money and stay driven by our users. In the future, we will look for ways to expand the service for other languages that have many characters, such as Myanmar.

Now, we need more feedback and for people to rate the app. Have a look in the Google Play or iTunes stores, download it, and let us know what you think.