Malawi has suffered from poor food production for decades—its 17 million people are mostly smallholder or subsistence farmers who have struggled to overcome drought, pests, and outdated farming practices. Even successful harvests are diminished because they have few options to process and store their crops for sale, resulting in post-harvest losses that cut deeply into already small profits. But development assistance from the United States and European Union is helping Malawi address its shortage of warehousing.

The U.S. Agency for International Development’s Southern Africa Trade and Investment Hub (the Hub) brought together the European Investment Bank, National Bank of Malawi, and the Agricultural Commodities Exchange for Africa to develop a first-of-its-kind Agricultural Storage Investment Facility (ASIF). Through ASIF, the European Investment Bank is channeling a credit line of €30 million (approximately $36 million) through National Bank for on-lending to seven Malawian agribusinesses to build more than 200,000 metric tons of new storage capacity.

To date, National Bank has loaned $12 million to four warehouse operators to build 100,000 metric tons of new storage, benefiting agribusinesses and—notably—potentially thousands of farmers. The Hub and its partners expect the remaining $24 million to be utilized over the next 18 months. The Hub will also support integrating these facilities into Malawi’s Warehouse Receipt System, which enables farmers to borrow money against their stock of warehoused crops to buy seed, fertilizer, and household necessities. Warehouse and grain silo operators such as Rab Processors and CP Feeds have already added more than 200 jobs after receiving financing.

“The Hub played an integral role in supporting National Bank to bring the ASIF to market,” said Harold Jiya, National Bank’s Director of Wholesale Banking. “By bringing these new sources of ﬁnance into Malawi, we are now able to ﬁnance important long-term investments that our clients highly value.”

To develop the ASIF, the Hub team convened international ﬁnanciers, agribusiness and farmer organizations, and other stakeholders. The Hub assisted in developing the instrument, building the financing pipeline, bringing in investors, coordinating investment appraisals by both the European Investment Bank and National Bank, and supporting transactions as they progressed through the approval process. The Hub is also supporting the Agricultural Commodities Exchange to integrate the new warehouses into its system.

“Storage bottlenecks have hindered Malawian smallholder producers from realizing returns on their activities,” said Kristian Schach Moller, CEO of the Exchange. “The Hub’s [ASIF] initiative is helping to overcome those bottlenecks.”

Malawi and other countries in southern and eastern Africa have increasingly endured drought conditions and crop-devastating infestation of pests such as Fall Armyworms. While these countries have historically turned to food relief programs to survive, they aspire to solve their food issues through trade, investment, and agricultural technology.

Storage facilities such as the ones receiving ASIF financing reduce post-harvest losses by controlling the temperature, shade, and humidity so harvested crops last longer and farmers can sell more of their harvests in the off-season, often for a better price than when they are desperate to sell expiring goods to opportunistic traders. In addition to staple crops such as maize, other grains, pulses, and legumes, high-value crops such as tomatoes, peppers, and fruit can also be stored in these warehouses for short periods. 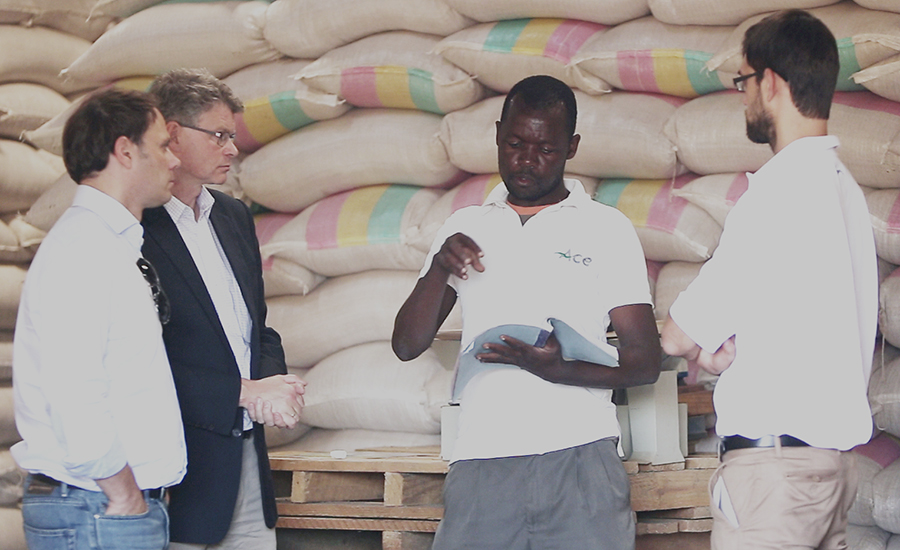 To borrow money from ASIF, warehouse entrepreneurs must put up their own capital as well as present well-articulated business plans. The four facilities built or expanded so far under ASIF are in and around Lilongwe and Blantyre, locations chosen to best serve farmers, cooperatives, traders, and transporters. Other warehouses are planned for locations such as Kasungu and Mchinji.

The ASIF is part of a trend of financing facilities that use European Union financing to generate local investment in areas such as energy efficiency in Eastern Europe and private sector engagement in at-risk countries. In Malawi, there is confidence that the ASIF will help farmers and others in Malawian agricultural value chains to earn more income—as well as serve as a model for agricultural storage investment facilities in other countries that rely on smallholder farmers.