On November 7, typhoon Haiyan tore through the central Philippines. While rescue and relief personnel have worked valiantly to meet the most urgent needs of the estimated 4.3 million people displaced, full recovery will take years and test the substance of the Philippines national and local governments and the international development community. The estimated impacts of this storm are huge, particularly in Leyte Province:

Was this a one-off occurrence? Unfortunately, no. The Philippines is one of the most storm-exposed countries in the world. Data show that the number of intense typhoons striking the Philippines has increased significantly since the 1980s as our world’s climate becomes warmer and thereby creates more unstable weather conditions. This trend will likely continue. While Haiyan might have the dubious distinction of being the strongest tropical cyclone ever to make landfall, it will likely not be the last of such magnitude to strike the Philippines. 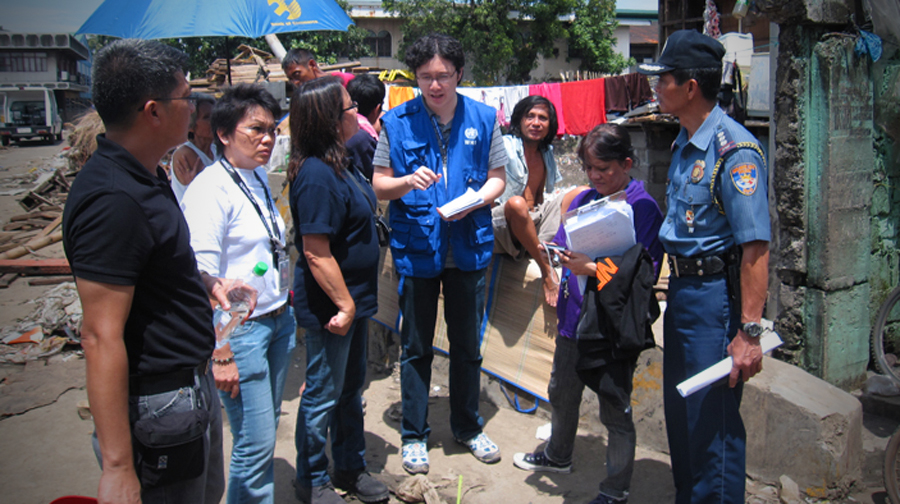 While aid agencies are rightly focused on providing immediate relief to the millions of Filipinos who have lost loved ones, homes, and livelihoods, we also must look at how to help the affected provinces and municipalities build back better and be more resilient when future storms hit. Drawing on lessons learned from post-tsunami Aceh, Indonesia, and post-hurricane and earthquake Haiti, we know that rebuilding offers ways to strengthen community and city resiliency at little extra cost.

Strengthening governance through broad-based citizen input. One of the challenges facing the Philippines is the inadequate preparation of its decentralized local governments for such storms. As municipalities begin to rebuild, besides providing financial and technical resources, donors can help strengthen the local governance systems and accountability that underpin future resilience. They can insist on broad-based stakeholder involvement in reconstruction planning and help local governments use surveys tools and mobile technology to facilitate civil society engagement in setting priorities and monitoring reconstruction performance.

Improving land use planning and enforcement of building codes. Some of the highest losses are in low-lying, flood-prone areas where the poor often live. Incorporating information on those areas hardest hit by the storm surge and flooding and controlling their redevelopment will enhance resilience. Donors can help by supporting the relocation of families and businesses from highly exposed to less vulnerable areas. In Aceh, DAI helped the local governments transform high-risk zones into forests and parks that can better protect urban areas from future tsunamis and storm surges. The images of the devastation in the Philippines show that poorly built homes and businesses suffered worst. The country has appropriate building codes, but often lacks adequate enforcement. Strengthening compliance with the codes combined with affordable financing that enables families and small businesses to rebuild better will strengthen resilience against future storms.

Restoring shelter and essential services. Rebuilding homes and restoring essential services takes money. Grants are often needed, but can have limited reach. A more effective alternative is to use grants to leverage private bank capital. This approach requires creative financing mechanisms that can deliver funding on terms appropriate to each client sector. For example, while households can often repay loans over five years or less, water and sanitation utilities need large capital infusions that can be repaid over 20 or more years in order to rebuild treatment and distribution systems. Again, donors have an important role in supporting the formation of—and helping to capitalize—sustainable financing mechanisms and facilitating public-private partnerships that can help cities like Tacloban build back better, especially if combined with technical support in conducting surveys, cost/benefit analyses, and infrastructure reviews to ensure that new investments are “climate smart.”

One area sometimes neglected in the rush to rebuild is restoring key support functions, such as the capacity to test water quality to ensure its safety. After the tsunami in Aceh, the U.S. Agency for International Development financed the establishment of laboratories that could test water supplies to ensure they were clean and safe. Finally, we cannot overstress the need to strengthen the resilience of mobile communications so that services can be restored quickly after such storms. These services are essential for giving people early warning, coordinating and tracking relief efforts, and locating the people affected and areas in greatest need of help.

Rebuilding economic livelihoods. Finally, our experience has shown the critical importance of helping communities rebuild local economies on sustainable foundations. After Hurricane Jeanne devastated parts of Haiti in 2004, DAI helped rebuild irrigation systems but also used this process as an opportunity to reinvigorate the smallholder water-user associations that manage the systems. Using short-term cash-for-work programs, the reconstruction efforts provided an immediate source of income, and then shifted to helping local farmers transition from the cultivation of low-value cereal crops to higher-value vegetables, which provided significant infusions of income within a few months and transformed agriculture in some parts of the country.

In a similar effort in Aceh, we were able to help local communities replace and expand the coastal mangrove forests and plant cacao trees further inland that provide a degree of protection from storms and tsunamis. These labor-intensive efforts provided immediate income for poor households and longer-term economic benefits while enhancing the protection of communities and urban areas from severe weather and flooding.

In summary, we all recognize the critical importance of providing immediate relief to those stricken by this catastrophe. However, let’s not lose sight of the opportunity not just to rebuild what was there, but to build back better, in ways that reduce future vulnerabili- ties and loss of life.