Somalia has one of the most insecure, complicated, and harsh operating environments in the world. Much of the country is in ruins, with conflict between rival clans, continued attacks by Al Shabaab, and violent power struggles amplifying humanitarian disasters such as refugee crises, famine, and poverty. In the past two decades, millions of dollars in international aid directed to Somalia has had mixed results, with many Somalis believing that well intentioned assistance has exacerbated conflict and increased corruption.

Against this backdrop, the U.S. Agency for International Development (USAID) Transition Initiatives for Stabilization (TIS) has developed a program design now welcomed by Somali communities and government as the preferred model for delivering aid. We localize program design, with residents and local officials gathering to prioritize projects in the very communities where they will be implemented, with planning sessions facilitated in the Somali language.

Implemented by DAI, TIS is addressing what Somalis say are their root causes of instability: lack of inclusivity, transparency, and ownership in the process of decision making. TIS Stabilization Planning Sessions offer a neutral, local space so people who were often excluded—women, young people, and minority clans—have a voice in consensus building. Since March 2011, the TIS planning sessions have generated 343 locally prioritized projects valued at over $26 million and benefiting an estimated 1.1 million Somali citizens—about 10 percent of the population. 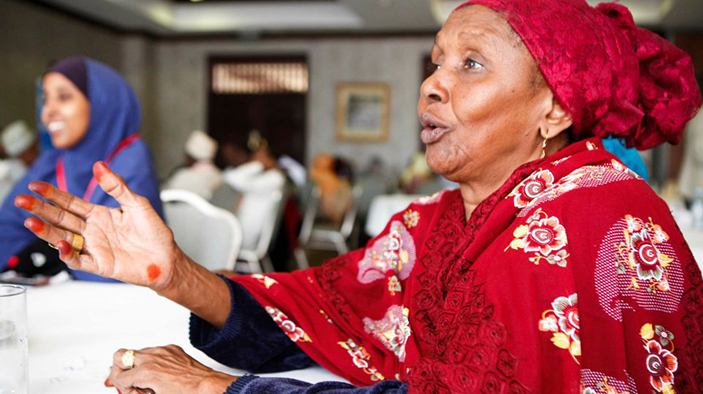 To promote inclusiveness and transparency, TIS Stabilization Planning Sessions bring together government staff, businesspeople, and community members including elders, religious leaders, women, youth, and minority clans. TIS personnel facilitate the three-day process in which participants analyze the local context, resources, and what is driving conflict, potentially including other development initiatives. They then design projects—such as the construction of roads, schools, health clinics, stadiums, and markets—to benefit the whole community and promote peace and stability. This incremental building of trust has empowered previously apprehensive Somalis to analyze, articulate, and collectively address their problems.

For example, shortly after the important port city of Kismayo came under government control following the ouster of Al Shabaab, TIS facilitated a planning session—at relatively low cost—that identified immediate entry points into an environment wracked by corruption, distrust, and conflict. Planners prioritized three projects: a 16-kilometer road serving numerous businesses, a celebration of Somali arts and culture through assistance to the Kismayo music and art groups, and assistance to a women’s organization promoting sanitation and city beautification. Conducting their deliberations in a neutral space, the 60 planning session participants set aside their differences and self-interests and developed a consensus on revitalizing the city and promoting peaceful coexistence. Subsequently, our contracting process ensured an open, fair, and transparent procurement, which resonated strongly with Kismayo residents as an ethical way of delivering aid.

Halima Awad, a participant at the Kismayo Planning Session: “[TIS] is different from other programs. It provided us with a budget, and we the community decided on which projects to implement, for the greater good of all of us who live here.”

By enabling local Somalis to lead the process and own the results, the TIS Stabilization Planning Sessions recognize communities as agents of change rather than passive recipients of aid.

For security reasons, many donor-funded programs for Somalia have been implemented largely from outside the country. When USAID and DAI launched TIS in March 2011, we recognized that we needed to design and implement grant-funded projects from inside Somalia to empower local people. The innovative approach of TIS Stabilization Planning Sessions has benefitted from constant analysis and application of lessons learned:

Build trust to ensure security for TIS staff and beneficiaries: TIS staff mitigate security risks by building trust with Somali leaders and communities and bringing conflicting parties together around common connectors such as tangible stabilization projects. When communities see TIS projects as their own, they then vouch for and go to extra lengths to ensure the security of TIS staff. Our inclusive and transparent process is as important as the end product.

Mainstream the discourse around ethics and “business unusual:” Corruption, gatekeepers, and diversion of aid are too common in Somalia and other developing countries. The TIS team begins the process of project design by discussing the principles of ethics, transparency in procurement, and zero tolerance for corruption. Our facilitators challenge the community to think beyond their clan interests, focusing on the good of the whole community and prioritizing activities and processes that will build social cohesion and mitigate conflict.

Reduce the appeal of extremism by giving voice to the vulnerable: Somali youth, members of minority clans, and communities in marginalized areas are all particularly vulnerable to extremism. Al Shabaab in Somalia capitalizes on local grievances, clan conflicts, and certain minority groups, enticing young people who are excluded from the political process to join the terrorist group with the promise of dignity and purpose. TIS activities expressly counter this appeal by engaging the people who are normally excluded, building their sense of ownership and pride as agents of positive change and part of a transformative process for their community and country. 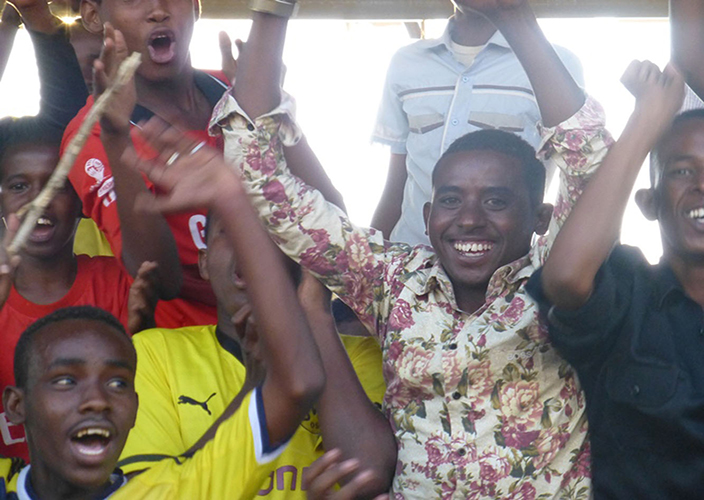 Our approach has sparked interest throughout Somalia, and USAID is frequently asked by Somali leadership to expand the TIS program’s geographic reach. The nascent Federal Government of Somalia is also applying our model to the formation of local governments by regularly sending representatives from the Ministry of Interior to observe TIS consensus-building sessions, and asking that other donor-funded initiatives use the TIS planning model.

After 20 years of chaos and conflict, Somali communities and government are working together to rebuild their country. A woman in the northeastern coastal town of Baargaal, Puntland, at the opening of the local government building, put it best: “This is the first time we have had reason to celebrate as a community in over 20 years!”