When Chevron launched the Niger Delta Partnership Initiatives (NDPI) Foundation in 2010, it knew there were no easy solutions to the instability felt by Nigeria’s youth, poor, and unemployed. Ethnic and religious conflicts had long festered and flared, including in the Niger Delta, where Chevron has extensive oil and gas operations. Taking a regional approach while still complementing other Chevron Nigeria social investments such as the Global Memorandum of Understanding (GMOU), the company sought to address the fundamental issues confronting local communities: the struggle for economic opportunity, the sources of the underlying conflict, and the capacity shortfalls constraining the Delta’s development.

NDPI created a Nigeria-based implementing partner, the Partnership Initiatives in the Niger Delta (PIND) and, together, the mostly local stakeholders set out to dissect the Delta’s local markets, find ways to bolster them, and improve the generation of products, services, and wages.

Building off of lessons learned from its previous partnership initiatives, Chevron’s “corporate social enterprise,” five years into implementation, has undergone its first major impact evaluation, and the results for NDPI/PIND are encouraging: “These catalytic resources,” the evaluation concludes, “bring hope and are captivating and empowering people of the Niger Delta.”

The evaluation, conducted by the Washington, D.C.-based Initiative for Global Development (IGD) and titled Pioneering New Operating Models and Measurement Techniques for Private Sector-Led Development, determined that NDPI/PIND and their partners have:

Since 2010, DAI has worked for NDPI to refine PIND’s strategy and operation, train and mentor its local staff, and bridge the gap between PIND’s public- and private-sector stakeholders. We champion and support PIND staff in applying market-systems approaches across all of its activities.

“NDPI, PIND, and Chevron have ‘moved the needle’ on corporate social responsibility, shared value, and development, to a new level by creating awareness, building knowledge, and changing attitudes, beliefs, capacity, and actions in ways that permanently re-orient the hopes, aspirations, and visions of the people of a society.” – Initiative for Global Development

The evaluation credited PIND—which has offices in Abuja, Warri, and Port Harcourt—and Washington, D.C.-based NDPI with developing key value chains and energizing peace networks. Its interventions led to marked improvements to the aquaculture, palm oil, and cassava sectors, benefiting those who farm, transport, process, sell, and purchase the products.

NDPI/PIND activities have encouraged the development of water, sanitation, and hygiene (WASH) infrastructure. The foundations’ long-term WASH goals include increased access to clean, affordable water, with government addressing WASH needs, and entrepreneurs seeing opportunities to fill these and other gaps in WASH infrastructure. On that front, development of business associations and business-related institutions also scored well in the evaluation. 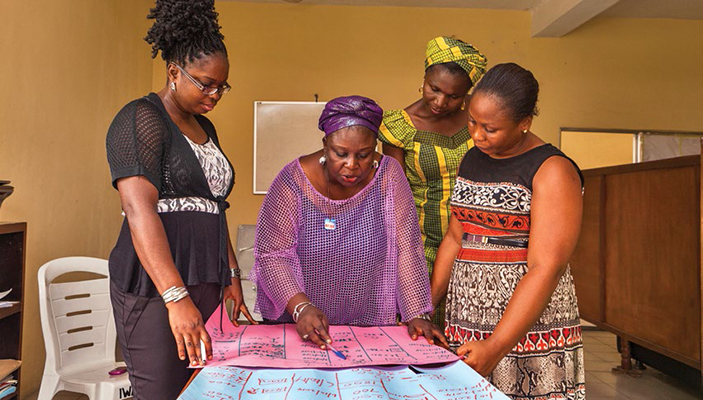 Government officials have taken note of the NDPI/PIND vision, as the evaluators noted incremental steps toward improved government partnering, including better collaboration with development actors, donors, and the private sector, and better alignment between federal and state bodies to prioritize and fund market systems development.

“NDPI’s success shows that multinational companies can contribute to systemic benefits for the local communities where they operate,” said Zachary Kaplan, director of DAI’s Energy and Resources Group. “Most importantly for the sustainability of this program and others that might follow in its footsteps, those benefits go both ways: bolstering peace, stability, and prosperity in the region, improving the ability of Delta businesses to deliver local content, and supporting Chevron’s social license to operate.”

While notable progress has been achieved, evaluators concluded that long-term commitment is required: “Achieving sustainable, systemic change is a process and one that is not accomplished quickly, nor by a single institution or sector. It requires an acknowledgement of the complexity involved in fundamentally changing human behavior and the fabric of a society … and sustained commitment and investment to establish and maintain trust and credibility among a large group of stakeholders.”

NDPI/PIND key innovation areas that were evaluated as “less mature” and need increased work toward achieving systemic impact include access to finance and financial services, and development of infrastructure in transport (roads, waterways, public transit) and power.

“Our goal in the Niger Delta is to address the underlying causes of the problems in major market systems affecting large numbers of people,” said Bill Grant, DAI’s global practice lead for market systems development. “For agriculture and the other influential systems at work, these causes can include whether the local people can borrow and save money safely, whether they have competitive technologies, have access to the best knowledge and inputs, can find access to reliable electricity, or can get back and forth to work, to name a few examples.

“The PIND team devised the right strategy to drive positive change because it clearly understands the current situation: the core relationships, the supporting functions, and the rules in the market system, as well as the dynamics of what is changing and why.”

Chevron’s approach—establishing the NDPI as an independent development organization with deep local roots, with PIND as its local implementing partner—was recommended by the evaluator as a model. “[Evaluator] IGD would like to use this opportunity to call to action other members of the private sector and development institutions to closely examine the NDPI model and seek every opportunity to replicate it around the world.”