Fifty years after independence, Tanzania still struggles to secure a resilient future. HIV/AIDS compounds the problems caused by poverty and scarcity, creating deep fissures in the national and local economies and leaving HIV-affected households highly vulnerable in the face of rising costs for food, schooling, and medical care.

One in every 25 Tanzanians—nearly 2 million people in total—is living with HIV, and another 1 million children have been orphaned or are living without a healthy guardian. Many lack a basic safety net for protection against economic shocks such as the costs to treat illness or the loss of income due to drought or incapacitation.

But now even the poorest Tanzanians in the hardest-hit areas are pulling together to form community savings and lending groups (CSGs). These groups of typically 15 to 20 people are enabling members to deposit money into a collective account—usually a simple lock-box—and borrow from the account when money is most needed, such as during the pre-harvest “hungry season” or when it is time to pay for the kids’ school and uniforms. 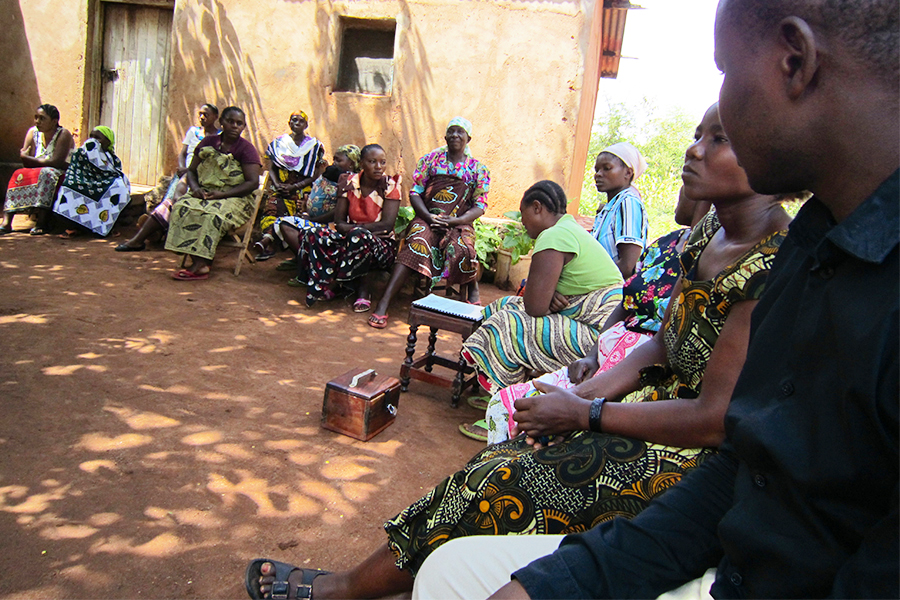 In addition to building resilience and financial discipline, these self-governing savings groups have had other positive effects for their members, according to two recent studies led by Economic Strengthening for Households Affected by AIDS (IMARISHA), a U.S. Agency for International Development (USAID)/U.S. President’s Emergency Plan for AIDS Relief (PEPFAR) technical assistance project implemented by DAI. The studies by IMARISHA, which works with Tanzania’s most vulnerable children and their home-based care partners, found that CSGs improve members’ ability to:

For example, in areas where CSGs are a key project component, households experiencing moderate or severe hunger dropped from 38.6 percent in 2011 to 15.2 percent in 2014. Over the same period, the number of households that saved TSH10,000 (US$5.50) or more per month increased from 27 percent to 53 percent.

The first study examined the models, attributes, and innovations of CSGs that target children’s caregivers as their members. Promoted by the Pamoja Tuwalee program, a USAID/PEPFAR-supported project implemented by four nongovernmental organizations (NGOs), these CSGs provide financial and other services and became an important tool in PEPFAR’s arsenal to improve economic resilience. As of September, Pamoja Tuwalee had successfully encouraged 81,644 households with vulnerable children to form and participate in 5,190 CSGs in 22 regions of Tanzania.

The second study was the IMARISHA Household Economic Assessments (HEA), the first of which was conducted in 2011 and the second in 2014, which analyzed changes over three years among HIV-affected households in IMARISHA’s area of responsibility.

Stable business activities can be hard to find in Tanzania where, according to the World Bank, 42.5 percent of the people live on less than $1.25 a day. In many rural villages, households earn most of their shillings sporadically from activities such as petty trading, homestead agriculture and livestock keeping, and small-scale processing of food or other handmade products. In rural areas, some find seasonal farm labor or work to clear rural roads; in cities, they might find casual labor in construction or housework. Regular income from salaried employment and—until recently—government cash transfers is not an option.

As a result, the very poor are forced to make difficult choices on how to spend money, particularly during the lean season when planting needs to be done and school fees need to be paid. Through USAID/PEPFAR and its local partner NGOs, CSGs are helping even the poorest people to manage their money. Communities are coached on establishing their own CSGs and their rules and structures. Groups are taught how to save, lend to one another, and form insurance funds to cover emergencies or internal charity funds to assist children. Importantly, the group dynamic engenders an environment conducive to socializing and disciplined saving.

Savings typically are accumulated weekly, although more is saved after the harvest. Money is often borrowed back during planting season, when seed is required, school fees are due, and food prices are highest. CSGs help the most vulnerable families to meet basic expenditures, thereby keeping kids in school, allowing roofs to get repaired, and enabling visits to the clinic when family members fall sick from bad water, weather, or malaria.

“I am a widow and used to live on credit most of the time,” said one HEA focus group participant. “Now, through a savings group, I manage to take out loans to do different business activities such as grocery selling and poultry keeping and even have some excess money. I am now managing to pay school fees for my children and made some improvements on my home.”

As can be expected, having both more financially able and less financially able members in the same group can present challenges to group cohesion. While the benefits of heterogeneous CSGs largely outweigh the obstacles, NGOs have been primed to watch CSGs for behaviors that mar group dynamics, such as ensuring that all people—including the less literate—know how the group functions and participate in the leadership.

CSGs are increasingly being promoted by Tanzanian NGOs and even some local government authorities. Tanzania’s new social safety net program, the Tanzania Social Action Fund (TASAF), has begun providing conditional cash transfers, and plans to include savings programs within larger programming for the poorest households. As informal savings groups proliferate, it is important to heed the lessons learned thus far and consider:

Many of the poorest and most vulnerable households in Tanzania are benefiting from participating in CSGs. For example, using IMARISHA’s Vulnerability Index, the HEA found that 47 percent of CSG households in 2014 were rated as vulnerable or highly vulnerable, compared with 70 percent in 2011. Also, 54 percent of those interviewed felt more in control of their economic futures than in 2011.

“Previously we would have to cut back on meals during the slim season and get loans to cover basic expenses,” said another HEA focus group member. “As a member of a savings group, at least we have peace, and we no longer have to take loans from banks that charge very high interest.”

Data is just starting to accumulate on the impact of CSGs on the health and economic wellbeing of HIV-affected households. But given what we know so far, local government, community volunteers, and care providers should continue to work to best utilize CSGs in social protection programming.