In certain post-conflict environments, resilience can be a double-edged sword —two Sri Lankan communities show a way forward. In the Batticaloa district of eastern Sri Lanka, citizens on both sides of the decades-long conflict between Tamils and Sinhalese have endured unimaginable horrors: targeted killings, prolonged food shortages, life-altering displacement. The communities that survived these recurrent crises often did so by relying upon the tight bonds and solidarity of their ethnic groups. As a consequence, even as the fragile peace seems to be holding, many communities in the north and east of Sri Lanka still find themselves segregated along ethnic lines — mistrustful and afraid of their neighbors, unable to achieve the security that comes through true reconciliation. For them, resilience has come at the high price of social and economic isolation.

For the neighboring communities of Pullumalai and Mangalagama, the story is different. Under the DAI-led Reintegration and Stabilization for the East and North (RISEN) project, Tamils from Pullumalai and Sinhalese from Mangalagama have moved beyond 30 years of conflict- induced separation to address a shared community priority. Citizens once resigned to permanently severed trade and social links are now beginning to rekindle an economic life that began to flourish when Sinhalese farmers first settled in the area in the 1970s. 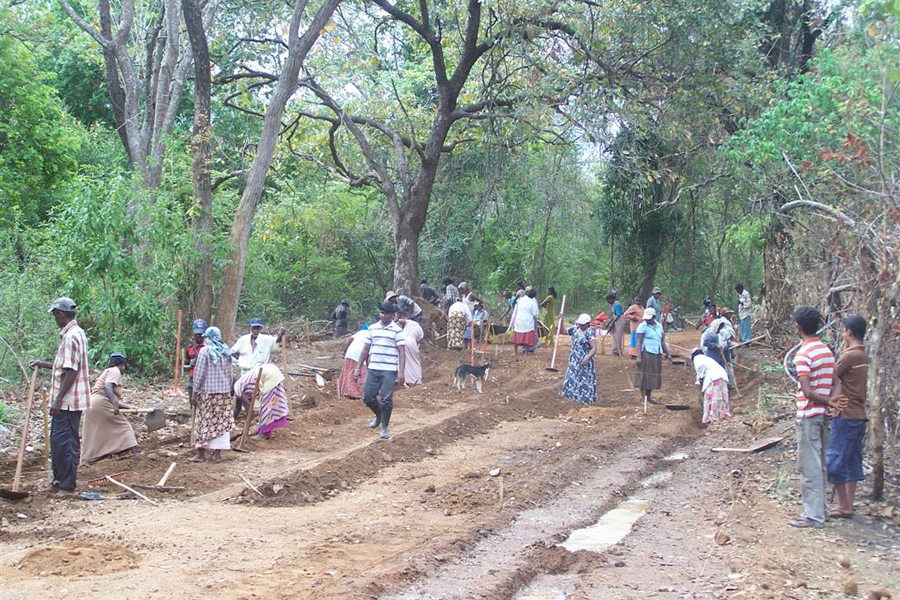 To catalyze this process, the RISEN project — an initiative of the U.S. Agency for International Development’s Office of Transition Initiatives — first set out to find a mutually beneficial project that would reconnect the two communities. The RISEN team identified community-based organizations in each village that could guide citizens in the task of prioritizing and addressing their needs. After consultative processes in each community, they decided to rehabilitate a road connecting the two villages. Thirty people from each community, chosen from among the most impoverished villagers, were selected to be laborers. RISEN partners helped participants set an activity plan and timeline, incorporating elements to stimulate conversation and social interaction and providing resources for psychosocial counselors and social workers to address unearthed trauma and facilitate dialogue.

The test of that bond came just a few months after the road was completed, when a prominent politician tried to stir up anti-Sinhalese sentiment in Pullumalai. The community — previously susceptible to such manipulation — repudiated her, as did the people of Mangalagama. People whose resiliency previously manifested itself in insularity are now showing themselves resistant to outside incitement—thanks to a neighborly relationship built on mutual understanding.

When the road was finished, the villages held a joint opening event to further strengthen their ties. Since then, trade between the villages has begun anew. Coconuts and watermelon grown in Mangalagama are now sold in Pullumalai. Veterans of the road rehab project are working on other infrastructure projects, without outside support. Citizens of Mangalagama and Pullumalai are no longer looking over their shoulders, but are instead looking forward to a brighter future alongside their neighbors.