In March 2013, mobile phone subscriptions in Indonesia—a country of approximately 245 million people—topped 285 million. That’s a penetration rate of 117 percent—higher than in China, India, or even Japan. As the cost of phones and service plans dropped, social networks and community media grew enormously, fueled by texting and phone-enabled video.

Funded by the U.S. Agency for International Development (USAID), SAFE teamed with the private sector, civil society, and the Government of Indonesia to utilize:

The results were impressive. Over two years, 347 farms—mostly in high-risk parts of Indonesia—self-financed biosecurity changes such as limiting the entrance of people and vehicles into the farm and improving drainage; and 2,721 vendors in 69 markets made their selling areas more sanitary. These actions were not taken solely for the sake of public safety but instead reflected business decisions influenced in part by customers—mostly women—brought together through social media to demand a cleaner, safer shopping experience.

Chicken is big business in Indonesia; the poultry industry does not export because it can hardly keep up with domestic demand. When avian influenza emerged in 2003, the disease struck Indonesia harder than any country. It killed 83 percent of its human victims, resulted in millions of chickens culled, and damaged countless farms and businesses. 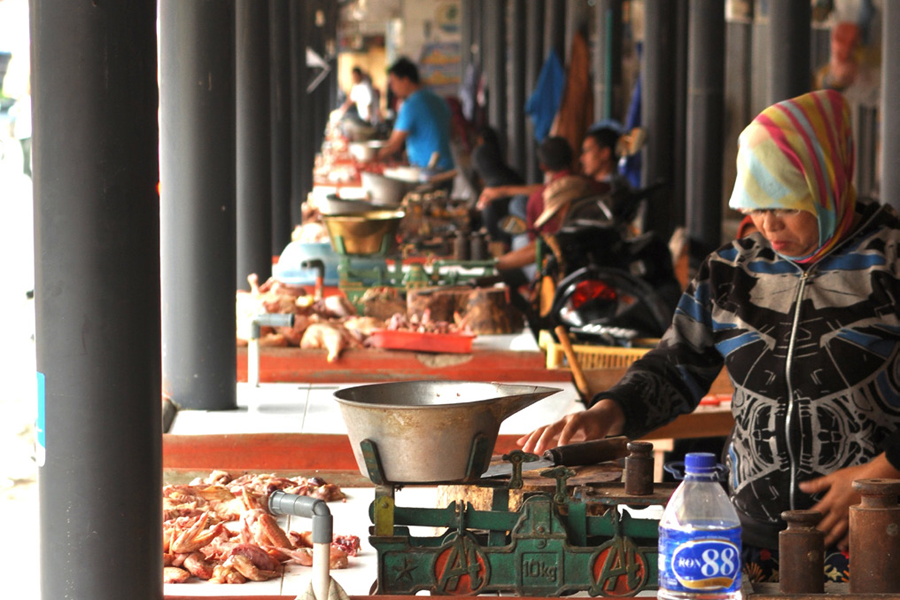 The disease spreads through unsanitary and risky behaviors. To change these behaviors, SAFE targeted its messages to members of the poultry supply chain: large producers, small farmers, traders, and transporters, plus live-market slaughterers, vendors, managers, and consumers. We reached out through their networks and preferred social media sites, mobile phone applications, and information platforms.

Importantly, we did not reinvent the platforms; we built on what existed and engaged three local partners:

Indonesia is the world’s fourth-largest Facebook user and fifth-largest user of Twitter—Jakarta sends out more tweets than any city in the world, even though only 22 percent of its people are connected to the Internet.

SAFE focused much of its social media campaign on the buyers of poultry—housewives, maids, restaurants, and caterers—and communities living near the live-bird markets in high-risk areas. We believed consumers could motivate even reluctant vendors through:

Our local partners already reached audiences among the poultry buyers. Aisyiyah had 5,000 Facebook followers, while the Suara Komunitas’ text messaging platform reached more than 7,000 unique visitors. The message we put out was simple: The consumer has a right to healthy products and should buy only healthy poultry for the family. We developed Islamic perspectives that resonated with consumers, and uploaded more than 140 articles to partner websites, generating 11,000 page views.

The results reinforced the idea that social media requires active moderating to keep people interested and attract return visits. Each partner assigned staff to be responsible for moderating discussion forums and blogs. Collectively, they galvanized the demand for cleaner poultry practices.

As part of the campaign, the poultry industry and SAFE created teaching farms where we hosted groups of farmers to learn first-hand about biosecurity, promoted the business case for safer practices, and provided technical assistance to willing farmers.

SAFE worked closely with 18 community and local government radio stations to air shows two to three times a week on each station for 10 months, and we purchased air time on commercial radio. We found that the “voice” of the radio supported moving consumers to action.

But the conversations did not end there. Farmers, managers of teaching farms, and industry technical staff all have mobile phones—farmers, in particular, commonly use text messages to communicate with industry contacts. SAFE and partner Satu Dunia launched a messaging platform to reinforce the lessons from the teaching farms; Satu Dunia sent more than 3,500 texts over seven weeks, while SAFE sent 16,000 texts over several months, on topics including biosecurity management and equipment, ventilation in chicken houses, production management, and news of disease outbreaks.

Long before it closed in mid-2013, SAFE began transferring responsibility to its partners for various initiatives, with an eye to their long-term sustainability. Among those that continue to thrive today:

Making strategic use of mobile phones, community radio, and the Internet, SAFE embodied the “voice and accountability” principles central to so many aspects of contemporary development, and showed what can be achieved through the energetic engagement of civil society. A 2014 evaluation conducted by USAID found that among the most useful and sustainable USAID/Indonesia-funded disease control activities—those that should be continued—are poultry commercial sector involvement, biosecurity training for poultry farms, consumer awareness raising, and teaching farms. These recommendations are a testament to the SAFE project’s initiatives and the social media activities that supported them.