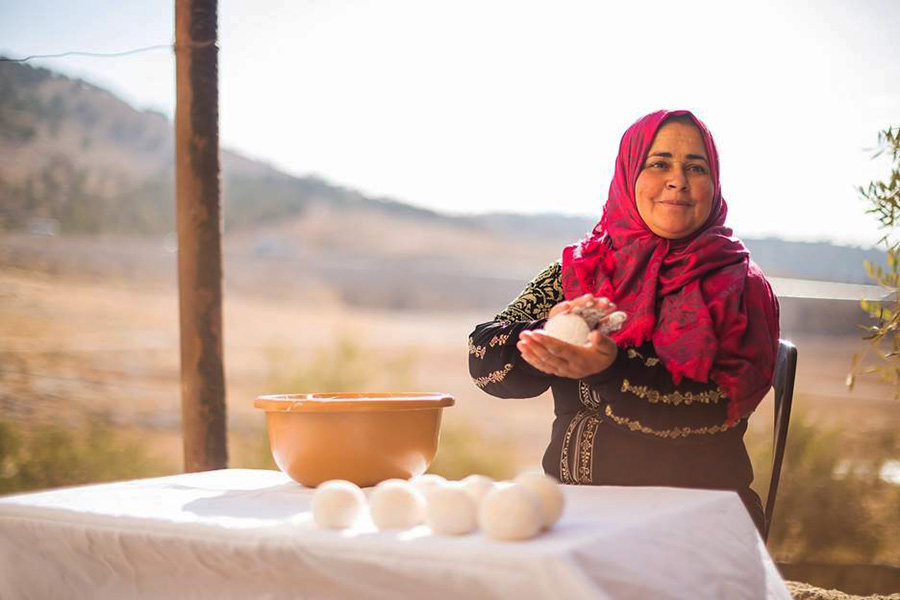 The home-based jameed production sector in Jordan was used by AWEF to understand the constraints, feasibility, and benefits of the proposed approach among women producers. Photo: FCDO AWEF.

AWEF focused on up-skilling producers and ensuring a market for the women’s produce that offered reliable linkages between dairy retailers, small-scale women dairy processors, and milk producers. As a result, women’s confidence in their market potential rose, their income-generating opportunities increased, and their agency within their household and community improved.

AWEF also worked with the Jordanian authorities to introduce a licensing and permitting process for home-based jameed production, giving women processors better access to production knowledge and more formal market opportunities. Both the linkages and the licensing interventions have enabled women to participate more effectively and required the private sector to change practices to the benefit of women producers.

In Egypt, AWEF worked with DFS partners to introduce the first female agent network, giving women access to e-payments through a network of trusted, community-based, female agents. The new network-enabled HBB owners to be more aware of the benefits of the digital economy and better able to access it. They were now able to pay for goods and services digitally when, and how, they wanted. The female agents, meanwhile, were engaged in a new and viable business offering e-payment options for women. These combined efforts resulted in greater access to and use of DFS by women and, as a consequence, these women now have greater control over their finances as individuals and as entrepreneurs.

Another consideration of the ICAI report was the need for programs to focus on the quality of jobs being created, not merely the quantity. AWEF was applauded for its focus on “decent work”, which includes considerations such as working conditions, fair pay, and anti-harassment efforts.

For example, AWEF’s work in Egypt’s ready-made garment and citrus sectors focused on ensuring access to high-quality jobs for women in two ways. From a process standpoint, AWEF developed tailored and transparent recruitment processes for women; from a policy perspective, it helped develop policies to support quality jobs for women employees that meant they were more productive and more likely to remain in their role.

These changes had a dramatic impact on the retention of female employers and the companies’ productivity, not to mention an improved working environment for all involved. Employees surveyed said they would stay in their jobs because they are happy or satisfied; 2,574 garment factory employees reported benefitting from improved relationships with supervisors who had received training; 46 percent of women said they had more voice and choice in their jobs (of 1,000 women interviewed). In the citrus packhouses, AWEF trained 2,484 women and supervisors in soft skills leading to increased confidence at work and improved working relationships with supervisors and colleagues and greater job satisfaction.