For villagers in northern Thailand’s Hae Ko hill tribe community, raising pigs is an integral part of their lives. Not only do the livestock serve as a critical protein source for the community and provide supplementary income, they are also culturally important as ceremonial gifts.

The significantly higher temperatures projected by the USAID Mekong ARCC Climate Study pose a major threat to this long tradition of raising pigs. The typical pig pen, where the livestock is held, is made of concrete and exposes the animals to higher temperatures, which can impact the productivity and health of the local breeds that households typically raise.

Additionally, the current pig pen design does not efficiently use clean water, which communities report is growing scarcer as a result of soil run-off from the hills after heavy rainfall—which is also expected to be more commonplace as a result of climate change. 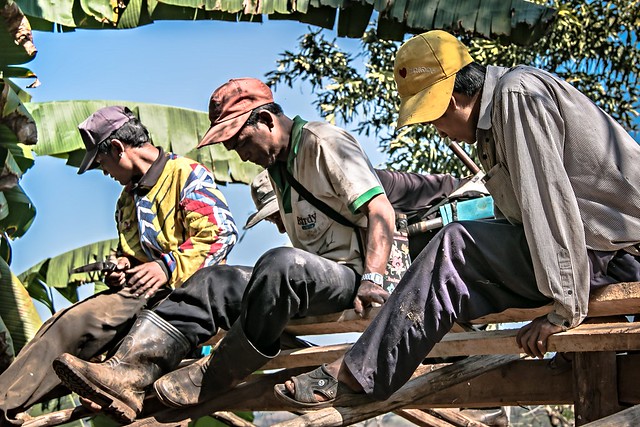 New animal housing structures and a more physically robust breed of pig that is better able to withstand heat increases are being introduced to the villages of northern Thailand by the U.S. Agency for International Development (USAID)-funded Mekong Adaptation and Resilience to Climate Change (ARCC) project and its partners, the International Union for Conservation of Nature (IUCN) Thailand and the Mae Chan District Livestock Department.

The new climate-smart pig housing design features high roofs with plenty of air ventilation to keep pigs cool in hot temperatures and floors made of organic material such as rice husk and straw so that the pens do not need to be washed out—saving important water resources and reducing environmental threats caused by pig waste. The low setup cost is also attractive for farmers. One local farmer, Aleh Yangia, spent around $40 improving his pig pen.

According to IUCN Thailand, the pig pits are part of an integrated system that provides several indirect benefits to strengthening climate change adaptation. For example, material from the organic litter bed can be used as natural compost for farmers’ vegetable gardens and fruit trees, leading to decreased chemical fertilizer use, improved growth, and increased soil health. Soil stability is critical given concerns about landslides and erosion, particularly during the rainy season.

“Not only will pigs in pig pits grow faster and provide households with higher incomes,” said Ratkawee ‘Joe’ Boonmake, IUCN Thailand Field Coordinator, “But they will also form a sustainable system that can survive future climate extremes.”

In the coming months, USAID Mekong ARCC and IUCN Thailand will continue working with villagers to install the new pig pit system and distribute the more resilient Black Chiang Mai piglets within the community. The project team will also organize peer-to-peer teaching to strengthen the community’s overall ability to manage and benefit from the new system in the face of a changing climate.