Despite significant improvements in the delivery of statutory justice services, most rural people in Sierra Leone lack the time, money, or literacy needed to access formal justice structures such as police, courts, or legal services. Instead, they rely on traditional mechanisms such as the Chiefdom structure, which are perceived as quicker, less expensive (in time and money), and more accessible.

Non-statutory, “informal” mechanisms are often considered to lack regulatory control or even to perpetuate discrimination and marginalization. In Sierra Leone, dissatisfaction with the way that some chiefs decide disputes has led to low levels of confidence and trust in the relationship between the community and the chiefs—to the point where sometimes chiefs are perceived as part of the problem, rather than the solution.

But a landmark Code of Ethics and Service Standards (CESS), and other reforms supported by the Access to Security and Justice Programme (ASJP), have gone a long way toward improving that situation, as has been powerfully illustrated in Sierra Leone’s response to the recent Ebola crisis.

Funded by the U.K. Department for International Development and implemented by DAI, ASJP works with the national government, civil society, and traditional structures to improve access to security and justice across Sierra Leone, particularly those living in remote, rural or marginalized areas. ASJP’s work with the Chiefdom structure has brought about transformative reforms in how justice is delivered by chiefs in all Sierra Leone’s 149 Chiefdoms.

The Chiefdom structure sits alongside the decentralized local government and covers the entire country—each Chiefdom led by a Paramount Chief and a set of lower chiefs who adjudicate disputes within and between communities and between communities and others such as the private sector. This structure has now been brought under the aegis of the national government, through the Ministry of Local Government and Rural Development (MoLGRD).

ASJP has grasped this opportunity to help the government and the chiefs reform the way they deliver justice, make chiefs more accountable to their communities, and improve cooperation between communities and chiefs. ASJP provided technical, logistical, and financial support to the MoLGRD and the National Council of Paramount Chiefs (NCPC) to craft the landmark CESS. In October 2013, the Code was signed by all 149 Paramount Chiefs and rolled out across the country.

The CESS is based on deep, contextual knowledge and experience of the execution of justice by the Chiefdom structure. Identifying the main areas where chiefs need help to exercise their authority with integrity and respect for national law and human rights standards, it represents a two-way commitment by each chief to the state and to his or her constituency. The CESS lays the foundation for improved security and justice across Sierra Leone by:

The CESS also acts as a means of accountability, by establishing performance indicators against which to track the number of complaints lodged against chiefs, the effectiveness of the NCPC Secretariat in responding to breaches, and the transparency of how chiefdom funds are raised and spent. 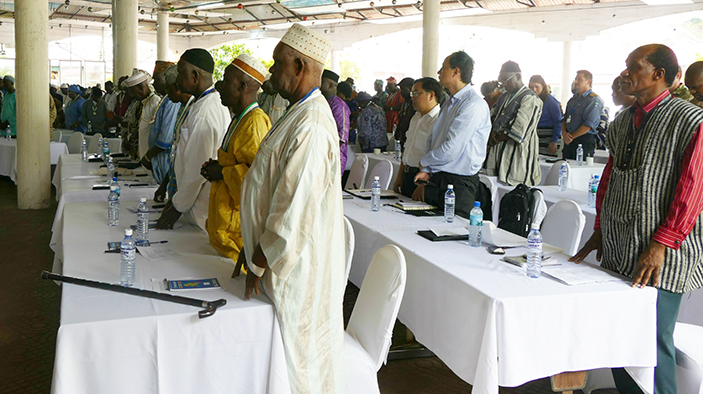 Since Sierra Leone’s 1991–2002 civil conflict, donor assistance has largely focused on the country’s formal justice system. While it is crucial to strengthen the statutory provision, it is also important to recognize the central role of traditional, informal, or non-statutory services delivered at the local level. Chiefs decide domestic and neighborhood disputes, acts of violence and aggression, debt disputes, damage to personal property, and disagreements over business contracts. In a national survey conducted by ASJP, three-quarters of the nearly 6,000 respondents said they would prefer to take a problem or dispute to a leader who lives in their own community rather than pursue the matter through the courts.

But the survey also highlighted inequities in traditional justice delivery, particularly in cases involving women’s rights or where there is a potential conflict between the best interests of the chief and those of his or her community. Young people are especially critical of the Chiefdom structure, which is dominated by older men.

Sierra Leone’s system of governance derives from new and old influences, a dualism that permeates the legal system, where constitutional rule coexists with traditional law. The challenge has been to develop modern political and administrative systems that work effectively with informal ones in alignment with the country’s Justice and Sector Reform Strategy and Investment Plan.

All existing and new chiefs are mandated, through their national council, to apply the CESS. In consultation with civil society, chiefs, village headmen, and district government representatives, ASJP, the NCPC, and the MoLGRD developed a training-of-trainers programme for 1,500 lower chiefs in remote areas, helping them to mainstream human rights into their mediation activities without abandoning traditional practices.

When Ebola struck Sierra Leone in June 2014, ASJP quickly realized that the Chiefdom structure was crucial for maintaining security across the country as well as to prevent further transmission of the virus. ASJP worked with the NCPC and MoLGRD to create “Ebola byelaws,” using the CESS as the foundational document. Implementation of these byelaws ensured that communities respected travel and meeting restrictions and contributed significantly to the reduction in traditional burial rituals, a major vector for contamination. Thanks to the CESS, communities were better aware of how to work with their chiefs and to hold the chiefs to account for implementing the Ebola byelaws.

Now that the Ebola outbreak is diminishing, ASJP is helping the Chiefdom structure to further roll out and reinforce the CESS, stimulating local participation, citizenship, and accountability within both customary law and liberal governance. Early implementation of the CESS and its convergence with the Ebola byelaws has demonstrated that the traditional and statutory systems of dispute resolution in Sierra Leone can be mutually reinforcing instead of antagonistic. Building the capacity of the Paramount Chiefs and ministries to implement these ethics and standards continues to be a major focus of the programme.