Severe food insecurity and a lack of diversified farming systems present serious challenges to Malawi’s government and development community. One great obstacle is misinformation. Many Malawians hold deep misconceptions about food—for example, that eating oranges or other citrus will shrivel a mother’s breasts. This misinformation works against a population whose rates of malnutrition and stunting—while declining in recent years—remain alarmingly high at nearly 50 percent.

By thinking creatively and unconventionally, the U.S. Agency for International Development’s Integrating Nutrition in Value Chains (INVC) program has influenced tens of thousands of farmers and families to change their beliefs and behaviors regarding nutritious food. To dispel these myths and promote healthier eating, INVC called on mothers and civil society partners throughout its area of operation as well as on a frequently overlooked class of caregiver: men.

Myths in Malawi about food and pregnancy:

Malawi’s government has elevated agriculture and nutrition to national policy priorities. In harmony with this commitment, INVC, a Feed the Future project, spurred households and communities to embrace change using care groups as an entry point. Traditionally, care groups are comprised of female volunteers who work as peers to offer health and nutrition counseling, referral services, training, and cooking demonstrations for other women of child-bearing age in their communities. This approach in Malawi would not account for an important dynamic—the number of men rearing children.

HIV and AIDS has left many Malawian men caring for children and in charge of domestic duties. This factor forced our team to think outside the traditional care group model and target male caregivers—and, by extension, their at-risk children and male friends—for nutrition outreach. But more than offering outreach, we knew men should also play a role in promoting healthy and nutritious behavior in their communities. 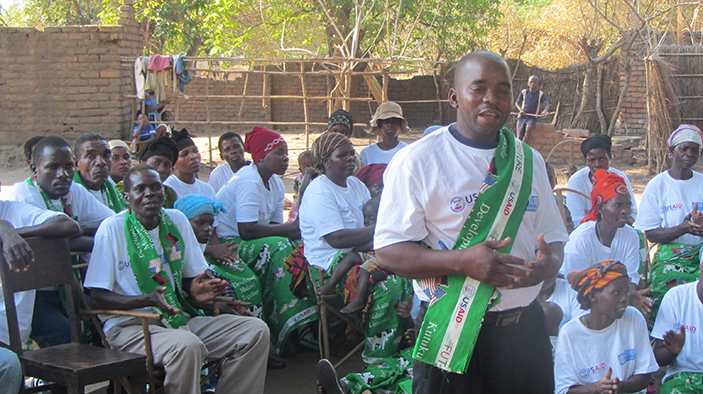 In enlisting men to participate in nutrition interventions, we found that most were younger—they were new fathers, after all—and amenable to modifying their behavior away from traditional norms. As a bonus, these care group fathers serve as positive role models for other fathers, challenging the notion of nutrition as a female issue. For example, from July to September 2015, INVC organized 93 cooking demonstration sessions for 3,858 care group members, including 555 men, while nearly two-thirds of the 1,234 community members attending “backyard gardens” training were men. Hundreds more attended water, sanitation, and hygiene (WASH) training and participated in community drama groups promoting good nutrition.

“My lead father is Mr. John Maposa. He taught me to eat perfectly, including fruits and other nutritious foods such as soy, groundnuts, and vegetables. Now that I have twins, he comes now and again to monitor their progress.”—Loveness Frank, a young mother from Lipagani Village, Chikhwewo, Machinga

INVC has implemented this model in five of its seven districts of operation, building the child health and nutrition knowledge of approximately 330,000 farmers, parents, and project partners.

In central Malawi, where arable land is scarce, most land is planted with maize and tobacco out of tradition and economic imperative. This preference for income-generating crops leaves little land for growing fruits, vegetables, or legumes or raising dairy livestock. This lack of nutritious food—compounded by the prevailing local misconceptions about food—has resulted in widespread stunting: children short in stature and slow to learn because they are undernourished in the womb and as youngsters. In turn, these children risk growing up to be underproductive in school and beyond.

INVC was launched as a first-of-its-kind response to this crisis, targeting the “poor with assets” for value chain strengthening—for groundnuts and soybeans, and all the people and livelihoods connected to those crops—while simultaneously introducing nutrition into their larger communities. The project has delivered impressive results while training hundreds of thousands of farmers, parents, and project partners on the role of nutrients such as vitamins, minerals, and proteins. 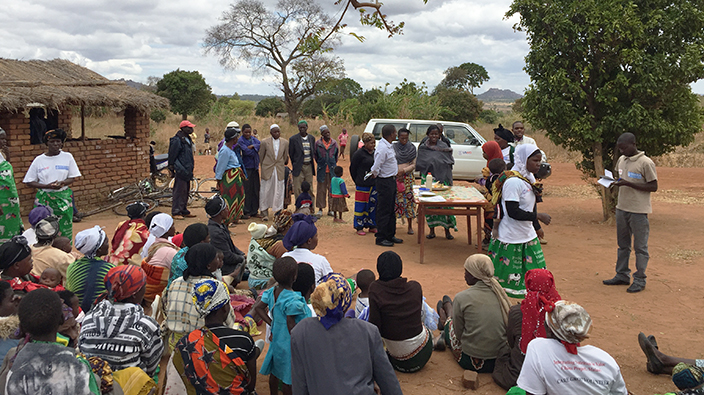 In promoting good nutrition, the project focuses on pregnant women, lactating mothers, and children under age 5, as well as farmers, uncovering the factors that limit nutritious consumption, from entrenched misconceptions about certain foods to economic factors affecting which crops farmers grow. We want anyone involved in pregnancy and parenting, including fathers, to comprehend the benefits or harm done by their eating and farming decisions, centering our behavior change messaging on improving breastfeeding, hygiene, complementary feeding, and maternal nutrition. Four key communication vectors have emerged from our work:

By integrating men into care groups and women into farmer groups, INVC opened new channels for growing greater quantities of nutritious soybean, groundnuts, and orange-fleshed sweet potatoes as well as selling the surplus through collective marketing.

Making good nutrition a part of everyday life in the developing world requires systems that connect people to food. INVC localizes that system, educating whole communities about nutrition and agriculture. As INVC winds down to its October 2016 conclusion, the cross-membership between care groups and farmer clubs and associations in south and central Malawi is showing how nutrition interventions by both men and women can be replicated and brought to scale. We hope these farmer-family ecosystems will sustain, replicate, and drive pro-nutrition behavior among communities in Malawi.