As global economies turn toward renewable energy generation, energy storage solutions are becoming a critical part of the conversation. For Sub-Saharan Africa, which faces the largest energy access deficit globally, and where 600 million people lack access to electricity, innovations in energy technology are critical.

Battery technology has the potential to play a significant role in growing the sustainable energy supplies that can fuel economic growth. The Energy Sector Management Assistance Program (ESMAP) estimates that 25.9 GW of new wind and solar capacity will be installed in Sub-Saharan Africa by 2025, despite challenges around enabling environment, access to financing, and project development.

Many of the countries we work in are seeking new technology solutions that can support their growing energy sectors. Why are innovations in battery technology so important?

“The inability of electricity to be stored easily creates a management challenge for utility companies and energy producers as they try to match supply with demand in today’s changing landscape. Traditional methods of pumped hydro storage are large, centralized plants and are increasingly facing environmental challenges around siting and water usage.

“Additionally, the rise of renewable energy technologies such as solar and wind means that there is an even larger mismatch between when energy is being produced and when it is being consumed. Unlike coal and gas, you cannot control when the sun shines or when the wind blows. This creates significant need for both short-term (under four hours) and long-term (six to 10 hours) storage technologies.

“Enter battery storage technologies. Lithium batteries have become increasingly competitive solutions for short-duration storage, even substituting for peaking power at times. Flow batteries, which differ from lithium in that they utilize liquid for the electrolyte, are cheaper for long-duration storage. Batteries such as the VRFBs, that Bushveld supports, allow you to have the equivalent of more gas in an automobile’s tank to give you more hours of energy, at a lower cost.” 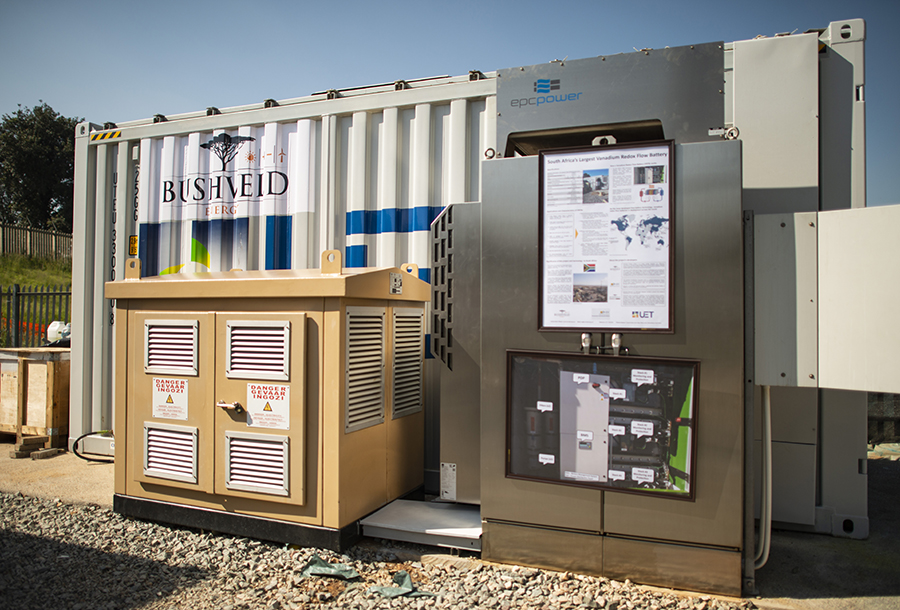 Tell us more about Bushveld and its approach to vanadium battery technology.

“We focus on electrolyte production, battery investment and manufacturing, and project development. We are trying to introduce an innovative circular economy model that allows for the chemical electrolyte in the battery to be financed and fully re-used. This allows us to implement a rental product model where the customer can rent out the electrolyte in the battery rather than buying it upfront—making it more economical and environmentally sustainable. We think that this circular economy approach, first applied to vanadium, can be applied to other areas as the African continent becomes more consumer-centric.”

Catalyzing private sector investment in Sub-Saharan Africa is a challenge that cuts across sectors, despite the tremendous growth being seen across the continent. Where does Bushveld see opportunities in Africa?

“Often technologies become available first in markets where they are developed, not where they are most needed or applicable. An example of this is solar PV. The first place you should go would be to Africa or Australia given their tremendous renewable primary energy resources, but that’s not what happened in the global economy. Sub-Saharan Africa is often the last place most companies go and usually only when other markets are saturated. But Bushveld sees the use case as superior in Africa for three reasons:

“First, the high cost of electricity in Africa. If you really look into what African consumers pay for electricity, it’s much higher than what consumers pay in the United States or Europe, sometimes up to 0.60 US cents versus 0.10 – 0.20 US cents per kWh. Often people also must invest in backup diesel generators, increasing their costs even more. This disparity is a positive incentive for us as it means that storage can be built into project development costs to provide energy that is cheaper and more reliable.

“Second, poor grid stability and reliability mean that utilities in Africa are incentivized to invest in storage solutions that assist in grid management. Batteries—especially as costs are driven down and production scaled up—can help strengthen existing electricity grids.

“Finally, the transmission and distribution (T&D) deferral opportunity. Battery storage would offset the expenses required by utilities to build new T&D lines to connect rural residents and remote industry, by putting a battery at the end of the lines to support growth. Additionally, as distributed energy infrastructure, such as mini-grids and micro-grids, are developed across the continent, battery storage can also help renewable energy producers reach rural or isolated communities not served by the power grid.

As the private sector expands in these markets, international and local development actors are also seeking to support the energy storage industry’s growth in Africa. What do you see as the role for development stakeholders?

“We engage closely with actors, such as the South African Energy Storage Association (SAESA), that are seeking to support the growth of the industry. In fact, SAESA was a founding member of the World Bank Energy Storage Partnership that is seeking to deploy 17.5 GW hours of storage in low- and middle-income countries by 2025. Industry associations, multilateral agencies, and development finance institutions have a key role to play. In markets where there may be a historic mistrust of the private sector, there is a need for objective third parties, who don’t have a vested interest, to serve as intermediaries. They can bridge the gap between private sector companies and government institutions, supporting on critical issues of energy sector regulation and planning. Often these messages are better delivered by a non-private sector voice.”

Even as storage technology becomes more viable in global markets, questions remain about the feasibility of scaling up in emerging markets. Where do you see gaps in supply chain and workforce in the countries where you work?

“There are clear gaps in the energy storage supply chain currently. For example, most production is centered in China, with few competitors elsewhere. With vanadium, there may only be one manufacturer who can produce at scale for a large utility project. Bushveld is able to overcome some of these challenges given that we are also vanadium producers; however, the issue remains critical for scaling the industry at large. Producing and sourcing these technologies locally, instead of importing, is an even larger challenge as most project developers want to get the best product at the best cost for the lowest risk, which often means reliance on international companies.

“Workforce also presents an issue for scaling. While there are electrical engineers, civil engineers, and technical experts in almost every country, the challenge is when the industry tries to scale exponentially and suddenly there isn’t enough supply to meet that demand. That’s where investments by development actors or private sector companies can help to build up capacity. Universities could be further supported to start anticipating some of these industry shifts and preparing students for cleantech versus traditional oil and gas careers.”

Many multinational companies in the oil and gas sector in Africa and other places are looking to shift toward other types of energy solutions. What do you see as a role for those stakeholders in the storage sector?

“As they start to invest less in exploration, shifting some of that CAPEX into renewable energy investments or projects is a huge opportunity for the sector given the size of its budgets and operations. For example, they can invest in high-risk, high-reward opportunities such as R&D for battery technologies, which can, in turn, help startups and smaller companies drive innovation. They could also invest in something more mature, such as the supply chain gaps I just mentioned. There are synergies between the core business of oil and gas operations and the supply chain needs of battery storage technologies; for example, toxic waste storage solutions would be a smart investment for the multinational, while benefitting the sector.”