One of the best ways to ensure a nascent democracy remains stable and becomes increasingly responsive to its people’s needs, according to the U.S. Integrated Country Strategy, is to invest “across a wider spectrum of society” to identify and cultivate leaders who will drive progress.

Since 2012, DAI has been doing exactly that in Burma, with the objective of deepening reforms introduced by Burma’s military-led government and sustaining long-term stability. Equipping key stakeholders with training on issues relevant to them, reducing barriers to their being heard, and expanding opportunities for collaboration around social issues have proven helpful in promoting peace and addressing intercommunal conflict.

Women leaders are a particularly important group to reach. The Framework for Political Dialogue created to guide peace process talks specifies that at least 30 percent of delegates to Burma’s Union Peace Conferences (UPC) should be women—but participation has consistently fallen short of that target. In Parliament, the numbers are even worse. As of 2018, only 10.2 percent of seats were held by women. Women in Burma have limited opportunities to become technical experts in areas pertinent to social reform, and often are unable to afford transportation and pay for the childcare necessary to attend formal events where they could voice their concerns on social issues.

On the technical side, DAI’s team has trained 675 Burmese women on peace process themes such as federalism, security sector reform, and economic policy so they can make meaningful contributions to the debate. In recognition of the numerous barriers that prevent women from attending trainings and formal dialogues, we created a flexible, rapid-response Women’s Participation Fund to cover childcare, transportation, and lodging as needs arose.

While the most recent UPC saw an increase in the share of women participating, up from 17 percent to 22 percent, work remains to be done if we are to fully integrate women’s concerns into national policy. To facilitate further coordination among women leaders, CS3 supported a mapping of influential women working on the peace process. But as peace negotiations proceed, we need to do more to consolidate lessons learned around gender and to strengthen coordination across key stakeholders so they can make common cause around the issues that unite them. 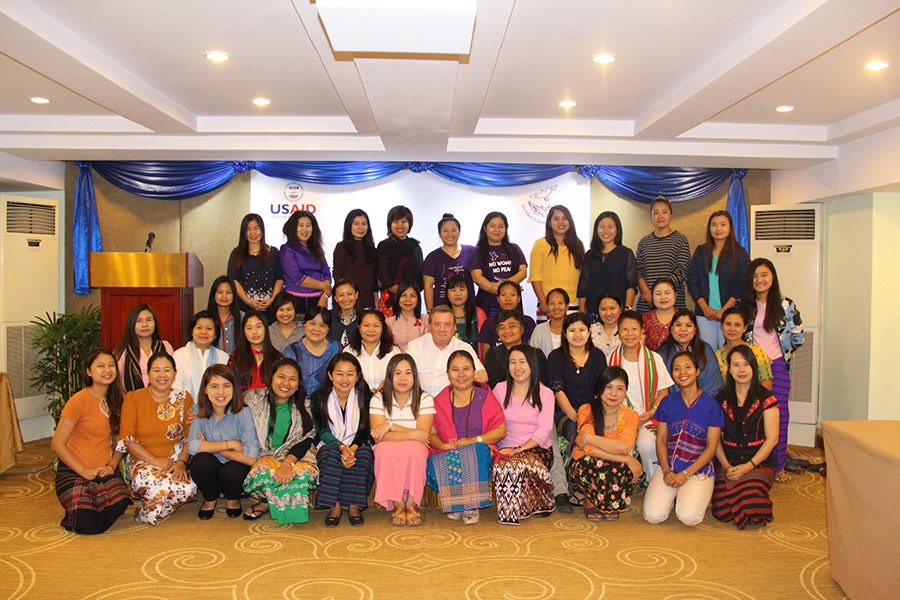 Success in Burma will only be possible if the national government is able to reconcile with its ethnic minorities and bring an end to decades of ethnically driven conflict. The third Session of the 21st Century Panglong Conference—designed to agree a nationwide ceasefire—made little progress. Some of the largest ethnic armed organizations, including the Karen National Union and the Restoration Council of Shan State, suspended their involvement in the formal peace process, and many others are increasingly hesitant to engage.

However, ethnic armed organizations are increasingly exploring alternative forums and informal negotiations. Ethnic minorities have historically been marginalized and, like the women leaders discussed above, they have lacked opportunities to gain the technical expertise needed to articulate constructive policy positions during negotiations. DAI, accordingly, has provided training on topics relevant to the peace process, logistical support to facilitate transportation and accommodation, and network building to help ethnic armed organizations and civil society organizations better coordinate.

Nipping Tensions in the Bud

As nationalism has deepened in Burma in the last few years, communal tensions have also risen and sparked violence along religious and ethnic lines across various communities. The rapid adoption of mobile phones and the surge in internet usage since 2014 has complicated the already tense environment by expanding access to (mis)information and opening opportunities for the dissemination of misleading messaging that can provoke conflict. For example, as ethnically driven conflict continues between the Arakan Army in Rakhine state and the national military, hate speech has also escalated between civilians exacerbating an already tense situation.

Tensions in Burma are not going to disappear any time soon, but equipping and empowering community leaders to monitor and squash misinformation has proven effective in reducing violence. DAI has trained people all over Burma in how to identify misinformation and then triangulate and verify messages by calling reliable stakeholders and community leaders. DAI also helped facilitate this type of communication by securely sharing contact information and creating encrypted messaging groups to facilitate quick connection. In northern Shan state, these types of activities have helped mitigate violence between communities.

In the Mandalay region, this type of partner network was able to prevent violence related to the construction of an alleged mosque that angered hardline Buddhists. The network coordinated with local authorities and encouraged residents to stay in their homes. This allowed enough time for fact checking, which actually revealed the building in question was only a house and not a mosque at all, which further appeased tensions. DAI has also supported the development of learning curricula focused on dispute resolution, conflict mitigation, and media literacy to nurture a generation of more savvy leaders and information consumers who know how to analyze the messaging they encounter and dissect the motivation behind it.

Supporting leaders from disparate parts of Burmese society has direct benefits for the peace negotiations and in reducing communal violence, but it also has implications for the broader political currents in Burma. With elections approaching in 2020, our aim is to help Burma’s leaders articulate constructive policy positions and promote an inclusive social fabric that is better safeguarded against violence-provoking hate speech—thereby setting the stage for more civil discussions around how Burma’s democracy can move forward and deliver progress to all its people.

Jez Haslam is a Vice President at DAI and Raisa Chowdhury is a Development Practitioner, specializing in democracy and governance.