On New Year’s Eve, 1879, approximately 3,000 people traveled to Menlo Park, New Jersey, to witness an extraordinary sight: an entire street lit by electric lamps. Only three months after prototyping what would become his most well-known invention, Thomas Edison introduced his light bulb to the public by illuminating his laboratory and a neighboring street with 60 carbon-filament bulbs. When one visitor inquired about the cost of powering the lamps, Edison quipped, “After the electric light goes into general use, none but the extravagant will burn tallow candles.”

Unfortunately, 140 years later, Edison’s vision of affordable and accessible electricity remains unrealized for much of the globe.

Progress has been made. From 2007 to 2017, global access to electricity grew by 6.5 percent, making 2017 the first year that the number of people without access dropped below 1 billion. South Asia saw a dramatic increase in the number of people with access to electricity, growing from 67 percent of the population in 2007 to nearly 90 percent in 2017.

In response to Africa’s energy crisis, the U.S. Government in 2013 launched the Power Africa initiative, coordinated by the U.S. Agency for International Development (USAID), to produce 60 million new electricity connections across the region by 2030.

Unfortunately, the funding needed to electrify Sub-Saharan Africa surpasses the combined amount available from African nations and international development agencies. Understanding this challenge, Power Africa teamed up with USAID INVEST, a DAI-led initiative that mobilizes private capital for development, to increase access to solar home systems and mini-grids in areas across Kenya where access to grid electricity has previously been nonexistent or prohibitively expensive.

While grid expansion projects provide enough electricity to power large appliances and meet intense energy demands, they’re expensive and can take years to complete, especially in rural areas. Off-grid energy businesses, such as mini-grid and solar home systems, are essential to reducing the energy gap for households and businesses in Africa’s most underserved areas, and in Kenya they have the potential to scale rapidly. However, because these energy businesses lack access to the expertise and support needed to navigate the financial and operational complexities that accompany growth, they often fail to reach their potential.

These businesses also struggle to connect with investors and banks that can offer the appropriate capital and terms required for company growth. In traditional markets, local banks often provide debt for working capital. Often, in countries where these off-grid energy businesses operate, local banks are unfamiliar with the sector, and their terms are often expensive.

One of these companies, Azuri Technologies, pioneered the Azuri PayGo Energy, a pay-as-you-go (PAYG) model. PAYG models afford rural customers immediate access to basic electricity and provide enough power for household light, device charging, and smaller appliances (such as TVs and radios), based on their energy needs and budget. 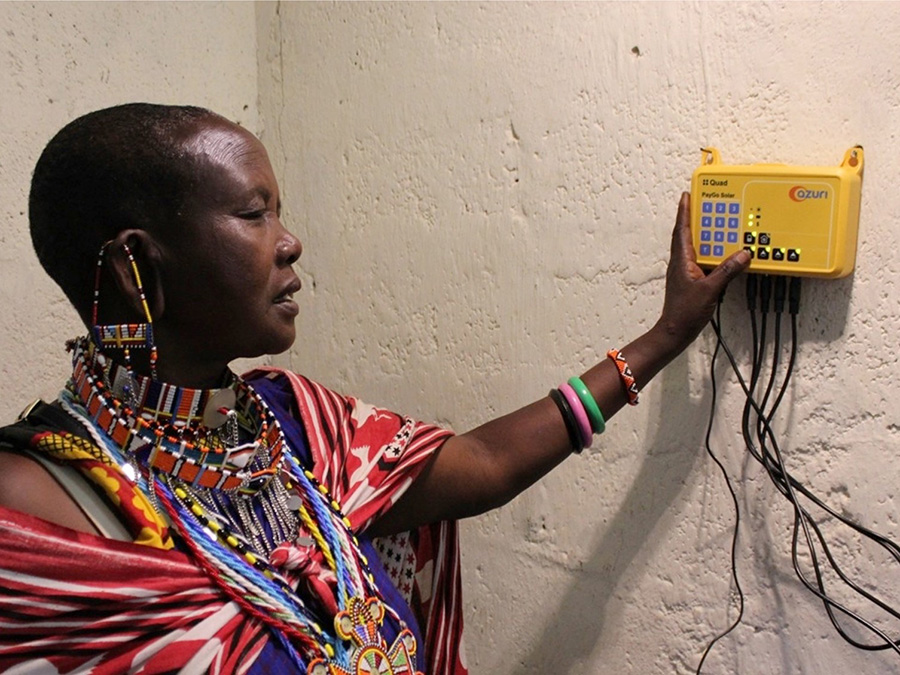 An Azuri customer in Narok, Kenya, uses the 10-watt system, which provides eight hours of light every night. Photo courtesy of Azuri Technologies.

Azuri, like most PAYG companies, charges a small, one-time installation fee for the system. Then, customers make manageable payments on a daily, weekly, or monthly basis via mobile money. For a basic Azuri home-lighting system, customers pay KES49 a day, the equivalent of 47 cents. For a system that includes satellite TV, the cost is KES102, or about $1. To determine pricing, Azuri’s technical teams research a country’s average household spending on phone charging and kerosene. Azuri then undercuts that figure, which incentivizes people to switch to solar systems for economic reasons. After 18 months of payments, customers own the system, thereby gaining access to a free, continued supply of electricity for as long as the system lasts (eight to 12 years).

With INVEST’s assistance, Azuri attracted a $26 million equity investment from Japanese corporation and Fortune 500 Global company Marubeni as well as additional investment from FTSE 250 company IP Group plc and PM Partners. Azuri’s growth is bringing safe, clean energy to thousands of people across Kenya, and INVEST’s support has put three other off-grid energy companies on the path to growth, too. Together, these four companies are projected to provide 390,000 new connections and 6,000 upgraded connections across the country. (Approximately 25 percent of Kenya’s population, about 12 million people, lack access to electricity.)

It’s difficult to overemphasize the transformative effect access to electricity has.

Access to education, for example, is dramatically hindered when children lack access to electricity. Approximately 90 million elementary school children in Sub-Saharan Africa attend schools without electricity. Not only do their classrooms lack copy machines, projectors, computers, internet, and science equipment, but their schools struggle to attract talented staff because many high-quality, educated teachers don’t want to live in unelectrified areas. Electrified schools are correlated with higher test scores and graduation rates, and they have higher enrollment and less absenteeism than their unelectrified counterparts. 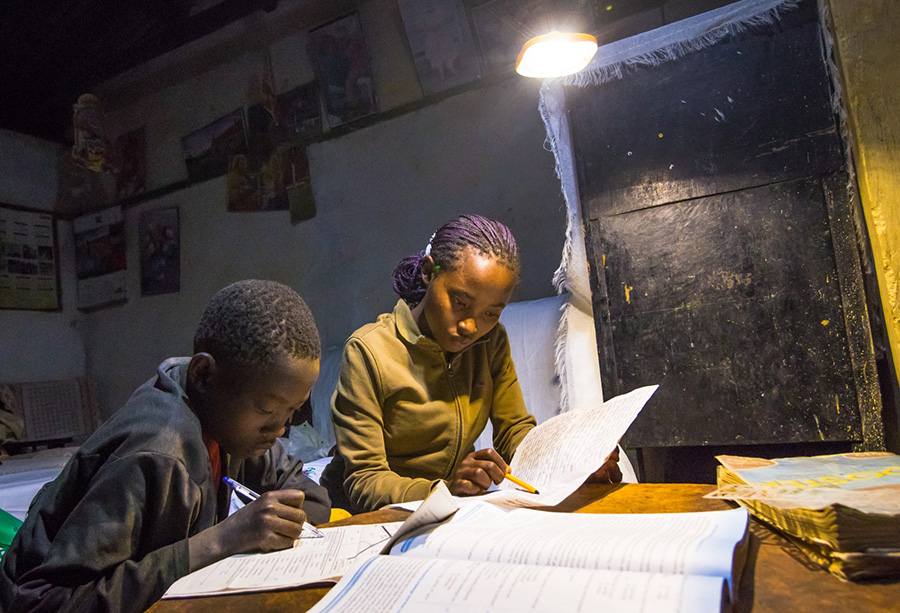 According to GOGLA’s 2018 report on the economic impact of off-grid solar, 84 percent of households with children reported that having access to a solar power system has increased the amount of time their children spend on homework. Photo Courtesy of Azuri Technologies.

When There is Light

Without electricity, children often spend hours collecting firewood, which reduces time spent both in school and studying at home. Similarly, children bound to the natural cycles of light and dark cannot study in the evening without burning alternative energy sources—such as firewood and kerosene—that bring the risk of fire.

Communities with electricity also have better healthcare. Health centers need reliable electricity to use diagnostic and medical devices without interruption. Those centers without basic lighting must overcome unnecessary obstacles during emergency surgeries and maternal delivery. And without refrigeration, vaccines spoil too quickly for distribution; likewise, people cannot store temperature-sensitive medicines, like those for diabetes and tetanus, in their homes.

Electricity also creates new business opportunities, such as mobile phone charging stations and internet cafes, and the integration of energy-based technologies into established businesses, such as electric razors for hair salons and cold storage for restaurants, enhances productivity. With electric enhancements, businesses can become more efficient, preserve supplies longer, and stay open later, all of which allows them to serve more customers.

Access to electricity also makes it possible for people to use radios, televisions, and mobile phones in their homes, which helps rural communities to feel less isolated from other parts of the country. When anticipating how having a television would alter his life, an older Kenyan villager said, “When I have seen what the president looks like, I will also feel as being part of Kenya.” 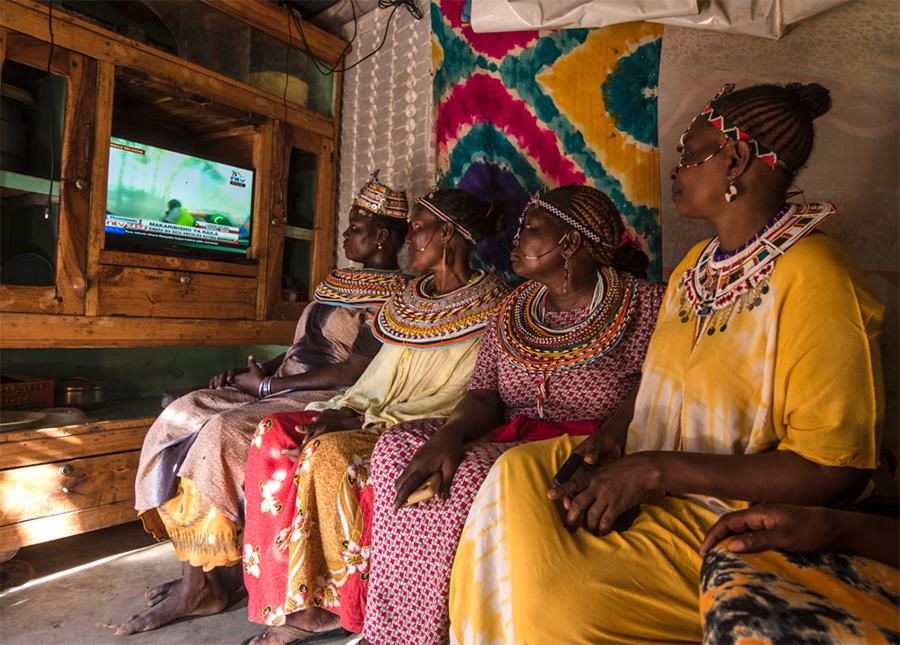 Solar home system products, like those made by Azuri, address the lack of access to national and global information faced by off-grid populations. Photo courtesy of Azuri Technologies.

People living in newly electrified rural communities have also reported developing increasingly positive mindsets about the trajectory of their lives. In one community in rural Kenya, where electrification had not yet had a significant effect on household or business incomes, residents still said they had a greater satisfaction with their lives and a growing optimism about their futures than before electrification.

That reaction echoes the experience of those 3,000 visitors who traveled on New Year’s Eve in 1879 to see the electric lights of Menlo Park. But it wasn’t the lights alone that captivated these people: it was the promise that accompanied their glow—the promise of a future illuminated with untold possibility.

Learn more about INVEST’s role in the electrification of Kenya.

This blog was originally published on a Medium site.