Women are far underrepresented in the tech world globally from bottom to top. The all-encompassing industry is looking into the mirror and seeing men and boys dominating technology jobs, classrooms, and expert panels, a bias now widely noticed.

In 2014, for example, only 18 percent of U.S. bachelor’s degrees in computer science were earned by women, who are projected to hold just 20 percent of professional computing jobs by 2025. Developing nations face similarly stark gaps.

Excluding women and girls exacerbates the general shortage of skilled applicants to fill jobs in programming, coding, and systems administration, according to Apple CEO Tim Cook. “Technology,” Cook says, “has an enormous issue with gender diversity.” 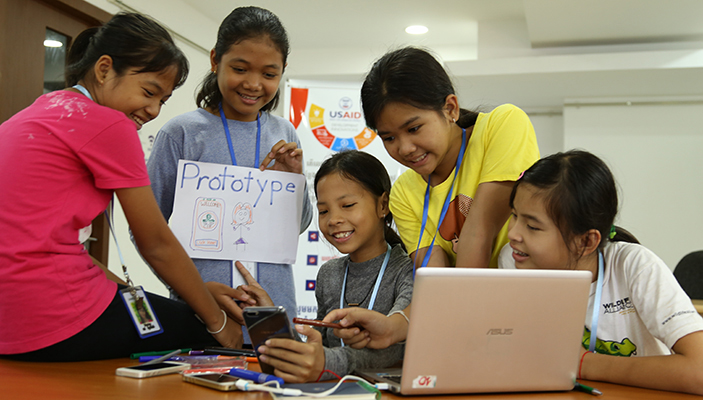 Enter the girls from Cambodia: These enterprising young women recently won a trip to San Francisco where they faced 11 other teams of young techies as finalists in the Technovation World Pitch Summit in August. The global competition attracted more than 1,100 teams of girls ages 10 to 18, each competing to develop the best app to solve social problems. As global finalists, the girls received $5,000 from Technovation to further develop their idea.

The Cambodian entrants, 23 teams in all, were supported by the U.S. Agency for International Development’s Development Innovations (DI) project, implemented by DAI, with co-funding from Cambodian private sector partners. The girls’ winning idea: an app called the Cambodia Identity Product.

“Our mobile app allows local people to promote their products,” said team leader Lorn Dara Soucheng. “There are so many poor people here. Many kids who do not have jobs migrate to neighboring countries like Thailand to work. This is the reason that led us to create this app—to help Cambodians.”

The team thinks its app will promote the purchase of various local products, from farm produce to artisanal creations such as traditional silk scarves and jewelry.

In Cambodia, many parents steer girls toward careers in more established fields such as administration and finance, versus computer science or other tech-focused fields. To enter the Technovation competition, girls and their parents had to commit to the 12-week, open-source curriculum, which was developed by Iridescent, a U.S.-based education nonprofit that produces Technovation and supported the finalists’ travel and accommodation in San Francisco.

To put out calls to girls to join the introductory session, DI joined with the Royal Government of Cambodia’s Ministry of Education, Youth, and Sports and used local and social media. In January, the girls went to work designing their projects, supported by more than 30 volunteer mentors recruited by DI from the business community and tech sector.

For the team behind Cambodia Identity Product, this meant convening at the Royal University of Phnom Penh every Sunday with their mentor, Putthira, an iOS developer for a local software company who accompanied them to San Francisco.

“I learned a lot [about] coding, business, initiating business ideas to help better Cambodia society,” Soucheng said. “Plus, I learned how to share responsibilities in such a big project and about team collaboration.”

Developing the app has proven more than a practical learning tool. The Technovation program strives to induct girls into technology and build the technical and professional skills needed to feed emerging economies for future generations. The girls who created Cambodia Identity Product are only 11 and 12 years old.

This practical program is helping bridge the digital access divide in Cambodia. Learning one programming language prepares the girls to learn and write other codes in the future—including ones not yet invented—while the contest compelled them to think in terms of business, profit, and sustainability. Equipped with these skills, the girls can keep learning, join online communities, and pursue their technology dreams.

Susan Wojnicki, the longtime Google executive and now CEO of YouTube, said recently in an address to the Anita Borg Institute: “Unless we make computer science a priority, we risk making gender, class, and racial disparities worse as jobs and opportunities flow to those who have a computer science background.”

Past participants of Technovation in Cambodia have told the DI team that they enrolled in software engineering majors at universities in Phnom Penh after being inspired by the program.

The Cambodia DI staff, the girls’ school—the Liger Learning Center—and our volunteer mentors are all proud of the girls’ remarkable achievement. Most important, though, is that with the girls now home from San Francisco, we look forward to helping them move their app idea to the next level, as well as encouraging them to mentor Technovation Cambodia’s next generation of all-girl problem solvers.