Macroeconomic resilience is a country’s ability to weather economic shocks. This article presents a practical tool—composed of a set of indicators and a means to visualize them—for measuring the macroeconomic resilience of nations. These indicators are based on the widely but loosely used term “fiscal space” and the innovative concept of “monetary space.” The tool helped the U.S. Agency for International Development (USAID) determine which countries needed additional assistance during the financial crisis in 2009, and it has been applied in countries as diverse as Bangladesh, Jordan, Moldova, and Vietnam. 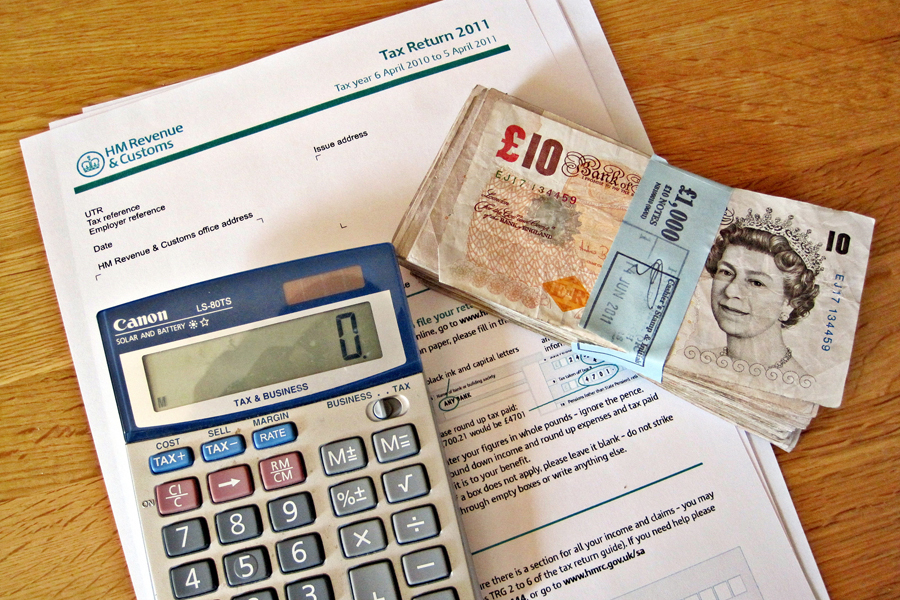 Although no country is completely immune to economic shocks, more resilient countries can insulate their effects. In the midst of the global financial crisis in 2009, USAID and the U.S. Department of State called on DAI to assess the potential need for extraordinary assistance to 13 countries — countries that appeared likely to be among the hardest hit.

The 13 countries assessed were a mix of least-developed countries: Albania, Cambodia, Guatemala, Honduras, Indonesia, Liberia, Mongolia, Mozambique, Senegal, Tajikistan, Tanzania, Ukraine, and Zambia. Because these countries did not have strong links with U.S. or international financial markets, they were not expected to suffer directly from the collapse of the U.S. housing market or financial markets in Europe. Instead, the main concern was their vulnerability to general demand-side collapse. As the U.S. and European economies went into decline, demand for exports from these countries would decline as well, leading to falling aggregate demand and further effects as this demand shock worked its way through the country’s income and spending levels.

Fiscal Space: A government’s ability to spend safely, for a specific purpose, without compromising fiscal sustainability and macroeconomic stability.

At that time, the terms fiscal and monetary space were not widely known. Institutions such as the International Monetary Fund (IMF), the World Bank, and the United Nations were using the concept of fiscal space in their own circles, but it had not been well-defined, nor was there a clear framework for its measurement. The IMF’s Peter Heller provided the first definition of fiscal space as “room in a government’s budget that allows it to provide resources for a desired purpose without jeopardizing the sustainability of its financial position or the stability of the economy.”1 The term monetary space, however, had not yet been well-defined.

A Framework For Assessment

In the absence of such a theoretical underpinning, DAI had to develop for itself a clearer framework for assessing the economic resilience of nations. The tool we developed is based on indicators that determine fiscal and monetary space, as shown in Figure 1. While many of these indicators are widely known economic and fiscal indicators, on their own they have little meaning. Bringing them together frames the analysis of a system’s fiscal and monetary space and, thereby, its degree of resilience. 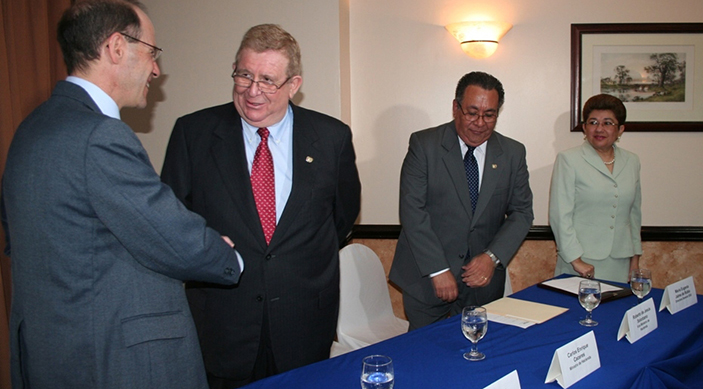 DAI then collected data for the 13 countries and compared these in a visual framework, as seen in Figure 2, using a traffic light approach — red, yellow, green — reflecting the degree of space. Red is considered problematic, green favorable, and yellow neither. 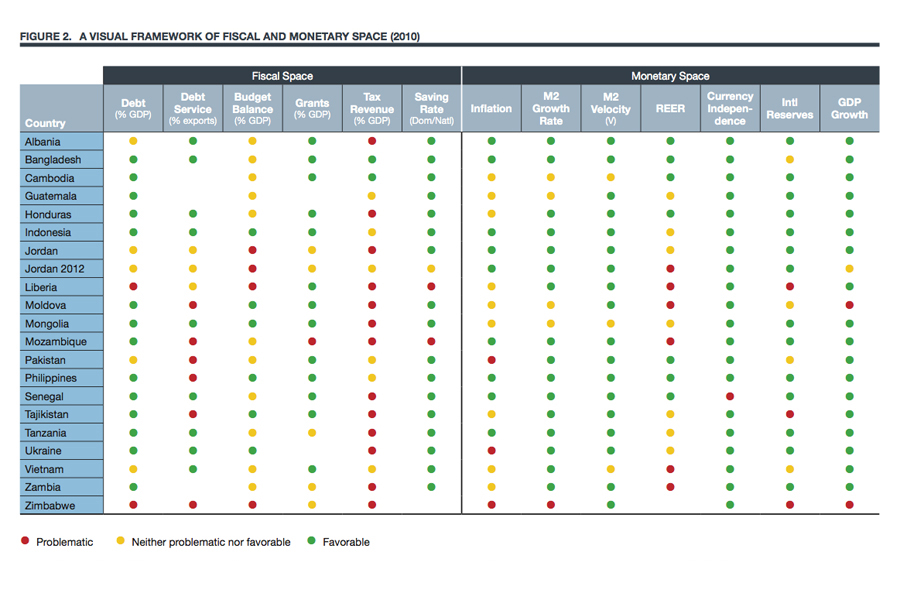 The determinants of fiscal space include the following:

Until DAI’s work in 2009, no framework for assessing monetary space had been defined. The indicators that determine monetary space presented below are, therefore, innovative. The determinants of monetary space include the following:

Implications For Resilience Across Nations

We assessed all the countries in Figure 2 by means of the framework presented. A country with mostly green indicators is considered resilient; that is, fiscal and monetary conditions allow for expansionary policies to be used to counterbalance demand shock. A country with several red indicators is considered less resilient; that is, macroeconomic policy instruments would likely be impotent to countervail external demand shocks.

For USAID’s purpose, a country with mostly red indicators is considered in need of ramped-up assistance in order to help it avoid a precipitous decline. As is evident in the chart, most countries display favorable or neutral conditions, the exceptions being Liberia, Mozambique, and Zimbabwe. Problems tend to fall in the fiscal space. Not surprisingly, the most frequent problematic indicators in these developing countries include high debt and low tax revenue collections.

The assessment framework has also proved to be a useful tool in advising finance ministers in Moldova and Jordan on their macroeconomic conditions. Additionally, Bangladesh’s Parliament launched its Budget Analysis and Monitoring Unit, with USAID assistance, using this tool for macroeconomic analysis in the midst of the global financial crisis.

While the tool represents practical wisdom in economics, it should not be used in isolation from other models, but rather as a complement to other models for assessing macroeconomic impact. Whether or not a country decides to follow the policy prescriptions derived from the resilience assessment tool, the dynamics in any given country may still represent a challenge for implementing counter-cyclical policies, as has been the case even in developed economies such as the United Kingdom.

While the global financial crisis reignited interest in counter-cyclical policies, any such policy has to be appropriate to the reality of the country. Factors besides those presented in this model are also important, including the quality of institutions and governance. When it comes to improving the economic resilience of nations, the policy recommendation must be for countries to strive to improve both monetary and fiscal space during good times, in order to counter the shocks that will inevitably come when times are not so good.