As the current Ebola outbreak vividly illustrates, the ability of developing countries to detect and contain outbreaks of infectious disease is a matter of concern to us all. That ability depends upon capacities across a wide variety of areas. Among these is the capacity of laboratories to quickly and accurately perform modern diagnostic tests — and that requires equipment. 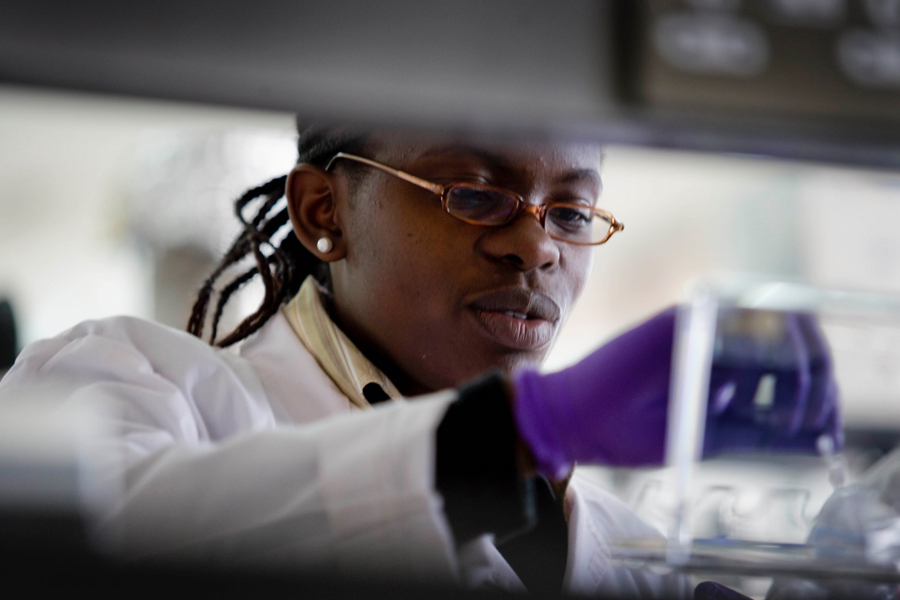 While the labs of district health departments are often threadbare affairs, diagnostic labs in developing country capitals often sport equipment that, apart from prominently displayed donor branding, would not look out of place in a major hospital in New York or London. Donor transfers of such equipment are popular all around: laboratorians are, of course, pleased to have the paraphernalia that enable them to perform modern diagnostic techniques, while donors get to make a photogenic and satisfyingly finite contribution to the recipient country.

It’s a conundrum familiar to those who work in all areas of development assistance, whether health, environment, agriculture, or most anything else. Modern equipment is not usually manufactured with developing country contexts in mind. Power supplies get fussy with brownouts and spikes. Spare parts are highly specialised and not widely available. The nearest qualified technician is in Germany or Taiwan. And while the days when donors dropped equipment without providing adequate training in its use are largely behind us, donors can have limited impact on the retention of trained personnel. Too often, the shiny lab gear sits unused for anything more useful than impressing visitors.

Donors are not ignorant of these problems, but have had few alternatives. If laboratories are to be able to perform modern diagnostic procedures such as polymerase chain reaction (PCR)—critical for diagnosing pathogens such as Ebola—they must have modern diagnostic equipment, regardless of whether the equipment available for purchase is suited for developing country contexts.

But as previously argued in this space, the maker movement offers new approaches to the gear that underpins so much of modern life. With its culture of openness and hands-off learning, and a suite of innovative tools and techniques for small scale production, the maker movement is enabling non-specialists to design and build some quite sophisticated machines, and in quantities that defy economic constraints that have shaped the logic of manufacturing since the days of Henry Ford—logic that has been especially unkind to the developing world.

To take advantage of the opportunities afforded by this shift, DAI has launched the DAI Maker Lab to experiment with ways to integrate the maker approach into its international development work. One of the lines of that experimentation is with open source alternatives to traditional development equipment transfers. That is why the Maker Lab’s first demonstration project was building a PCR machine from an open source design called OpenPCR.

OpenPCR is a thermocycler, a machine that heats and cools a sample and reagent solution at the precisely regulated intervals necessary to catalyse a reaction that replicates the sample’s DNA so that it can be probed and manipulated with laboratory techniques. Developed by Josh Perfetto and Tito Jankowski with input from a vibrant community of interested makers, OpenPCR can be built from less than $600 worth of mostly off-the-shelf parts.

OpenPCR’s low price tag is nice, but the real appeal for developing country environments is the open source design from readily available parts. Because OpenPCR is designed to be built by the user, the user ought to have the confidence to open it up to fix it should something go wrong. Should the power supply prove inadequate, it is easily replaced—you could even scavenge one from a junked desktop computer. (The DAI Maker Lab plans to experiment with running its OpenPCR from a car battery—a viable prospect in principle.) The heat sink is readily available from a well-stocked computer shop. The few custom parts are easily fabricated, and the design files needed to do so are freely available. And support is just as available to the user in Lagos as it is to the user in Los Angeles, through the OpenPCR online community.

In a development assistance context, such open source hardware alternatives offer significant advantages over standard equipment procurements. The labs that get the parts, tools, guidance, and references to build an OpenPCR own that machine in a more complete way than they could ever own an expensive proprietary model. The maintenance and repair of the machine—and extension of its capabilities—are not hostage to a manufacturer’s revenue stream. The principles of its construction and use are well documented online.

It’s a model whose sustainability is proportional to the ingenuity of its users. And ingenuity is something the developing world has in abundance.