Despite greater economic stability since 2000, Honduras has yet to significantly improve living conditions or reduce poverty for much of its citizenry. The National Autonomous University of Honduras reported that, in 2020, the extreme poverty rate had reached 53.4 percent and the total poverty rate 70 percent. Some economists have warned that the poverty rate could increase to 75 percent in 2021 due to the economic crisis caused by the COVID-19 pandemic, natural disasters, and lack of work opportunities. The average Honduran living in an urban area faces additional risks such as bus robberies, indiscriminate homicides, extortion, and other criminal activities perpetrated by gangs. Along with corrupt law enforcement officials and political interests that oppose reforms, the rising violence has undermined the public’s trust in the judicial system.

Against this backdrop, the DAI-led Justice, Human Rights, and Security Strengthening Activity (Unidos por la Justicia)—funded by the U.S. Agency for International Development (USAID)—works with local partners to improve citizen engagement with the security and justice sectors, enhance the efficiency of the judicial system, and increase the effectiveness of community police.

With support from Unidos and its implementing partner, the National Center for State Courts, the country’s Judicial Branch recently unveiled an electronic case file system. Called SEJE for its initials in Spanish, the system is nothing short of a transformation of the Honduran justice system. Courts currently use paper case files, which are economically and ecologically costly as well as logistically difficult and time consuming to handle. Under SEJE, these case files will be digitized. Digital files are a more efficient, reliable, and transparent system for processing cases, and will allow for real-time notification of all relevant parties to a case of court scheduling, rulings, and other procedures. Digitization will also allow the Judicial Branch’s statistical and quality control units to collect and analyze data about case flow, identify bottlenecks, and better measure the performance of judicial units and individual judges.

SEJE will yield cost savings and make judicial operations more efficient and transparent. With complex cases now requiring as many as 30,000 folios, savings on paper alone will be significant. In addition to improving the efficiency of that part of the Judicial Branch responsible for tackling corruption, SEJE will make court operations themselves more transparent and therefore less susceptible to wrongdoing. Digital files will be harder to alter, hide, or misdate due to built-in timestamps and digital fingerprints left by every user action in the system. Documents that are legally public will be easier for citizens to access.

“Strengthening access to justice creates hope,” said USAID/Honduras Mission Director Janina Jaruzelski in her address during the launch event last month. “This will also help to reduce irregular migration, since citizens will feel safer in their country.” The overall impact of this innovation will be more efficient administration of justice and reduced impunity for people who break the law, summed up Unidos Chief of Party Caterina Valero.

The creation of SEJE started almost four years ago after Unidos assessed the technology the Judicial Branch was using at the time. That assessment resulted in the drafting of a Strategic Innovation and Modernization Plan, with SEJE as the centerpiece. The Supreme Court Plenary then authorized the implementation of SEJE and the creation of three groups to oversee it: the National Coordination Committee (justices of the Supreme Court), a Technical Committee, and 18 Departmental Committees to coordinate regional implementation.

The Supreme Court’s approval of the SEJE governance structure and of the 13 courtrooms where SEJE’s implementation will begin represents a crucial sustainability milestone because it ensures that permanent governance bodies will continue to lead this effort beyond the current president’s tenure, which concludes in January 2023.

As recommended by the Unidos assessment, the Judicial Branch created an executive committee of information technology (IT) staff and top administrators tasked with implementation. The committee includes the institution’s directors of budget and planning, human resources, quality control, IT, communications, and statistics, reflecting the level of teamwork required to implement the Strategic Innovation and Modernization Plan.

SEJE’s implementation process is designed to train Judicial Branch IT staff to maintain and expand on the system without outside help. And the Judicial Branch has demonstrated its commitment to do just that; it’s already invested in new technology and hired computer programmers and systems designers. This institutional buy-in will help ensure the sustainability of USAID’s investment.

SEJE is now operational in Tegucigalpa’s Extortion Court and will roll out to the Corruption Circuit Court by the end of the year. Unidos decided to pilot SEJE in the extortion area because extortion is a major source of revenue for Honduras’ violent street gangs, robbing small business owners of the ability to make a living, putting lives at risk, and depressing economic development. The resulting lack of security and opportunity makes extortion an important push factor for irregular migration. The Judicial Branch plans to eventually extend SEJE to the entire court system, but the next stop in the system’s rollout will be the Corruption Court. While extortion robs people of their security and the ability to make ends meet, corruption robs them of hope that their situation will improve.

Another aspect of SEJE designed to bolster people’s security is its biometric controls module, which replaces the current system for documenting the compliance of people charged with crimes but granted pretrial release. Those defendants are obliged to appear periodically before the court and sign a logbook that is stamped and dated by a court secretary. The biometric system will instead require a fingerprint scan that is automatically entered into an electronic court record with a digital timestamp, eliminating the potential for fraudulent registry entries. 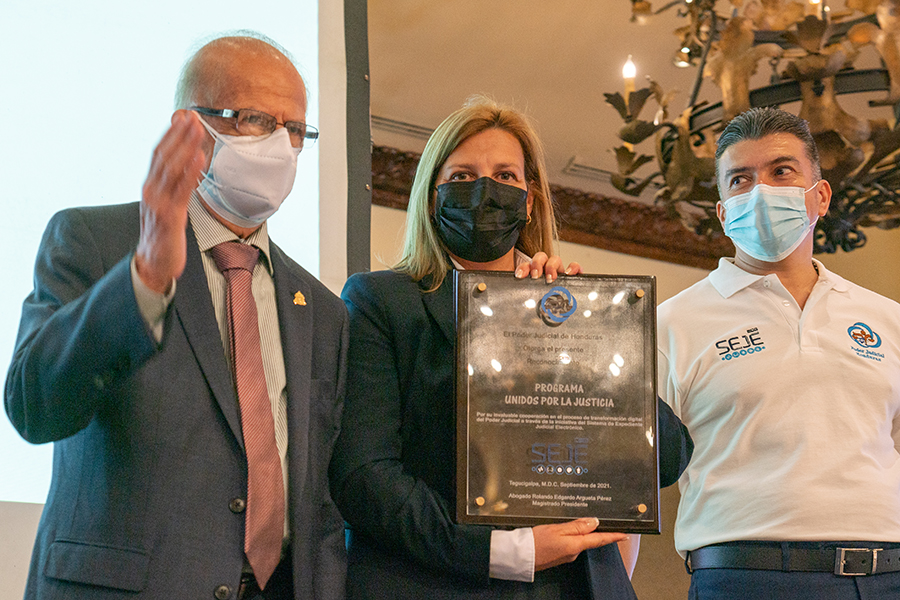 In addition to SEJE, Unidos also supported the creation of an Electronic Annual Operating Plan (e-AOP), which enables Judicial Branch managers to track the progress of the Strategic Innovation and Modernization Plan implementation online, in real time, and link to budgets and expenditures, a capability that soared in importance with the arrival of the COVID-19 pandemic in Honduras.

“The advantage of this tool is that it brings everything together in one shared place, allowing us to align our efforts, and all under the established goals and objectives of the institution and the priorities of management,” said Judicial Branch Planning and Budget Director Maria José Laitano. “It allows us to improve all our monitoring and evaluation processes.”

“As of today, this is a shared workspace for only our administrative offices, but our goal is to be able to implement the e-AOP in all of our jurisdictional areas,” Laitano added. “It is a big challenge. We have more than 500 jurisdictional offices on a national level, but we are not going to rest until we achieve that, because we are convinced that it will be of great benefit,” she said. Giving everyone easy access to performance data will engender friendly competition within the court system and result in improved justice services for the public.