Despite the Philippines being among the first countries to introduce electronic tax filing opportunities more than 15 years ago, only 8 percent of its tax returns in 2013 were e-filed. By comparison, e-filing rates in peer countries range from 70 to 100 percent. But the Philippines is catching up.

With assistance from the U.S. Agency for International Development (USAID)-funded Facilitating Public Investment (FPI) project, the Philippines Bureau of Internal Revenue (BIR) has taken giant strides. In two years, BIR achieved a nearly seven-fold increase in the number of tax returns e-filed, from 1.5 million returns in 2013 to 10 million in 2015. There are early indications that the number will reach 16 million returns in 2016 when 75 percent of all tax returns will be e-filed.

Eligible taxpayers can avoid long lines by simply downloading the e-filing software, filling out the appropriate BIR form, and clicking “submit.” Taxpayers receive a message confirming their successful submission. In less than an hour, the taxpayer should receive an email from BIR confirming receipt, which serves as proof of compliance.

The team from FPI and its local partners worked behind the scenes to build consensus on issues such as the importance of e-filing, and to expand the capacity of the older e-filing system, develop and promote the new software, produce taxpayer guides, advocate for relevant regulations, and conduct a public awareness campaign. As a result, the traditional long lines at tax offices during peak filing periods have largely disappeared.

“The beauty of eBIRForms is that previously, especially for No Payment returns, you had to (manually) fill out the old paper forms, type them up … now it is just a matter of a click of a finger. You do it on your computer and you are finished,” said Alfredo Manala, a certified professional accountant and partner at a leading Manila-based firm, Mariano, Chunpeng, and Associates.

The BIR has reduced the money it budgets for printed paper returns, and the paperwork burden weighing on overwhelmed document processing divisions is beginning to lighten. The efforts have led to reduced cost of compliance for taxpayers and are increasingly providing tax officials with crucial primary taxpayer data to inform such key functions as taxpayer services, tax audit, and arrears management. 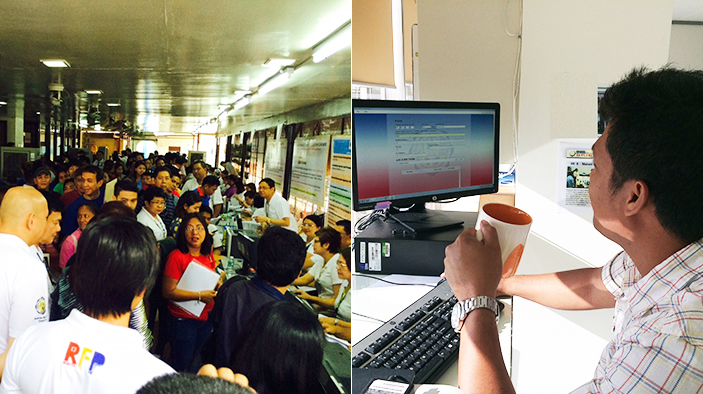 The FPI team will next help the BIR improve mobile payment business processes by working on key policy changes that could pave the way for further expansion of electronic payment. The new software and procedures being developed will also enable Philippine taxpayers to pay what they owe electronically via the G-Cash facility operated by Globe Telecom and Land Bank.

With a population of around 100 million people dispersed throughout some 7,000 islands, and with an internet penetration of about 45 percent, the Philippines faces a steep tax administration challenge as it seeks to efficiently and fairly raise the revenue it needs to pay for programs that promote economic growth and prosperity for all Filipinos. The e-filing capability is a clear step in the right direction.