It has been more than 15 years since the Government of the Philippines undertook its last comprehensive tax policy reform. Over that period, tax revenues have seen a steady decline, from a high of nearly 17 percent of GDP in 1997 to only 13.6 percent in 2016. This decline can be attributed to both domestic and external factors. On the international front, the Asian financial crisis of 1997–1998 and the global recession of 2008–2009 certainly contributed to sharp drop-offs. But the Government of the Philippines’ limited ability to enforce fiscal discipline also was a factor, allowing special interests to introduce loopholes, weaken tax laws, and chip away at previous reforms. These factors were compounded by lower import duties (motivated by the prospect of improving trade) and flaws in the 1997 excise tax reform.

However, recent years have seen an uptick in the tax revenue-to-GDP ratio since the low of 12.1 percent reached in the post-recession year of 2010, helped by adjustments to corporate, excise, and value added tax rates in the early 2000s and steadily increasing incomes. These recent increases were also in no small part due to the efforts of the U.S. Agency for International Development’s Facilitating Public Investment (FPI) program in modernizing and expanding the electronic tax-filing system, which among other achievements increased the e-filing rate to 76.23 percent by October 2017, compared to 8 percent in 2013. 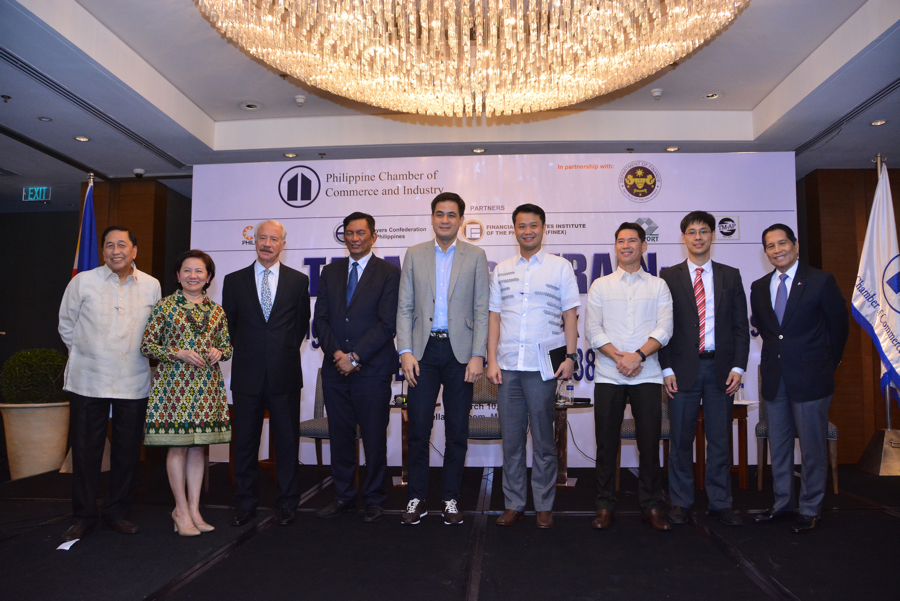 Not content with capturing significantly more tax revenue through expanded e-filing, FPI has also been working to push sweeping tax reform legislation. Building on comprehensive technical support to the Department of Finance (DOF) and the Bureau of Internal Revenue (BIR), FPI facilitated passage of the Tax Reform for Acceleration and Inclusion bill (TRAIN), culminating with President Rodrigo Duterte signing it into law on December 19, 2017.

The TRAIN Bill: A Summary

A major overhaul of the tax code, the TRAIN bill is expected to raise P130 billion (roughly US$2.5 billion) in new revenue, 70 percent of which will go toward funding the government’s “Build, Build, Build” infrastructure program and 30 percent toward social programs, such as the Unconditional Cash Transfer structure that provides P200 per month to the 10 million poorest Filipino families who will be affected by the higher prices of goods and services resulting from the bill. A major feature of the bill is the reduction of income taxes for most wage earners while increasing them for the very wealthy. This change in itself represents a net reduction in revenue, but is made up for by the introduction of new excise taxes.

FPI drove outreach and consensus building for the legislation through nationwide tax reform roadshows in collaboration with the Philippine Chamber of Commerce and Industry. The resulting tax reform coalition—composed of private and business sector associations, the Open Government Regional Dialogues with the Philippine Open Government Partnership Secretariat, and civil society organizations—proved to be an effective advocate for bringing tax reform into the public discourse and garnering public support for the legislation. FPI also worked with the DOF’s Strategy, Economics, and Results Group and led meticulous assessments of the TRAIN bill’s Lower and Upper House versions, proposing detailed amendments and sharing them with DOF stakeholders to arrive at the final bill.

TRAIN’s passage begins to address some of the Government of the Philippines’ signature priorities, namely to invest heavily in infrastructure and to simplify the tax code. However, TRAIN is just the first of five planned reform bills. One major intended component of TRAIN 1 that was not finalized in time for the bill was the Tax Administration Reform Act (TARA). TARA was meant to complement TRAIN by providing a modernized tax environment that is conducive to the proper implementation of the Philippines tax law. However, tax reform pragmatists in both Houses and the DOF decided to prioritize the passage of TRAIN 1 and leave TARA for another day.