Seeking to support good governance specifically in Pakistan, the U.K. Foreign, Commonwealth & Development Office in 2016 launched the Consolidating Democracy in Pakistan (CDIP) programme, just ahead of the 2018 General Election. The results have been impressive. 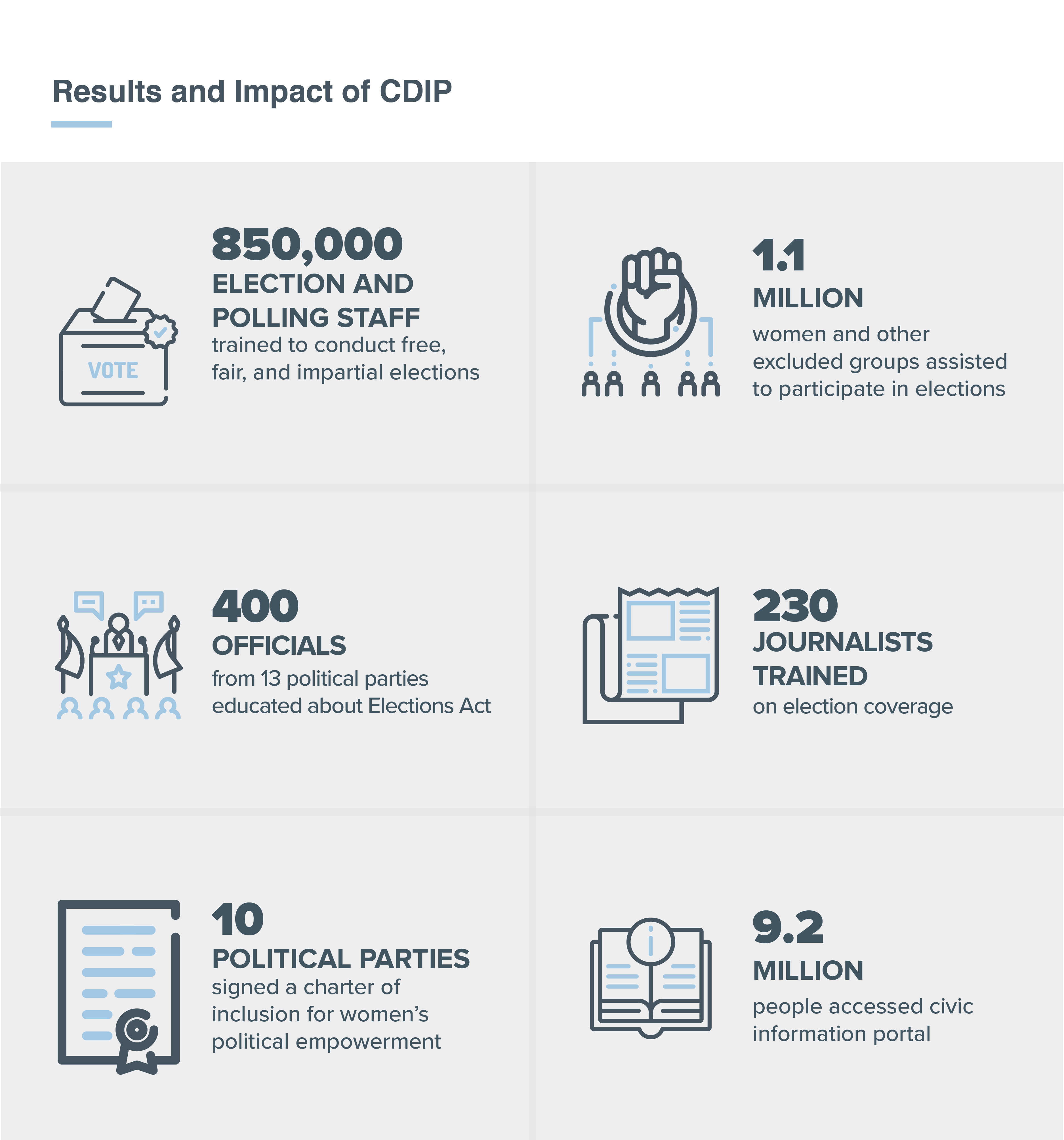 The programme—led by DAI in partnership with the British Council and the Pakistan Institute of Legislative Development and Transparency—worked closely with the Election Commission of Pakistan (ECP), national and provincial assemblies, political parties, media, and civil society organisations. The United Nations’ Strengthening Electoral and Legislative Processes project was another significant partner.

CDIP’s objective was to support the development of a democratic system in which government institutions are more capable, parliament is more accountable, and the state is more responsive to citizens’ needs and aspirations. To achieve this outcome, CDIP—locally called Tabeer—had four mandates:

In pursuing all four mandates, CDIP focused on engaging women and other socially excluded groups. 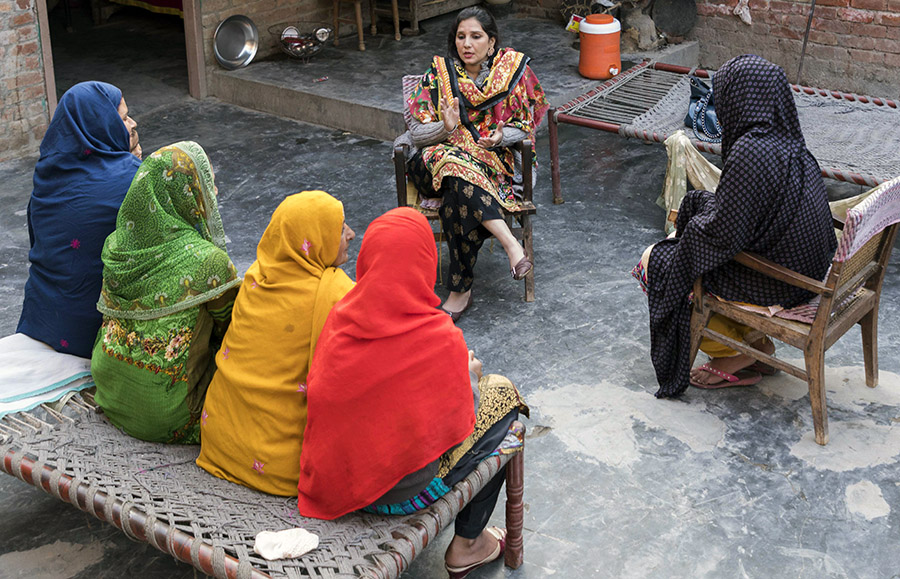 “CDIP was guided by an emphasis on improved election management and oversight as the vehicle by which democracy can be deepened,” according to Zehra Zaidi, DAI’s Programme Director to CDIP. “We believe improvements in the electoral process and election of a representative government lead to a democratic mandate for parliamentarians and political parties.”

Early in the program, assistance focused tightly on implementing the Elections Act of 2017, which was itself pulled together with CDIP assistance. The team worked behind the scenes to consolidate Pakistan’s fragmented election legislation into a coherent legal framework. The “unified, reformed, and comprehensive electoral framework was a longstanding demand of all political, institutional, and civil society stakeholders,” said Zaidi. “This was achieved through an impressive and consultative parliamentary process to which all stakeholders contributed. And, although questions were raised by major political parties on the transparency of [the final] results, the ultimate outcome of the elections was the acceptance of results by all political parties.”

Among the triumphs of the 2018 election process was a major milestone for the country: the highest-ever turnout of women voters in Pakistan’s history. Indeed, women’s turnout actually exceeded that of men in 18 constituencies. The rising participation of women was in large part to a CDIP-supported nationwide voter registration initiative that included a comprehensive media campaign to encourage voter registration and rectify discrepancies in the electoral rolls, awareness-raising campaigns leveraging corporate social responsibility, and grassroots mobilisation of women and members of other socially excluded groups.

CDIP contributed to other gains in the electoral process, including a technically better-managed election with significantly fewer polling day irregularities than the previous general election; the publication of all polling station results forms; the collection of gender-disaggregated turnout data at the polling station level for the first time ever; and uniform, effective enforcement of regulations governing the campaign period for candidates and political parties. 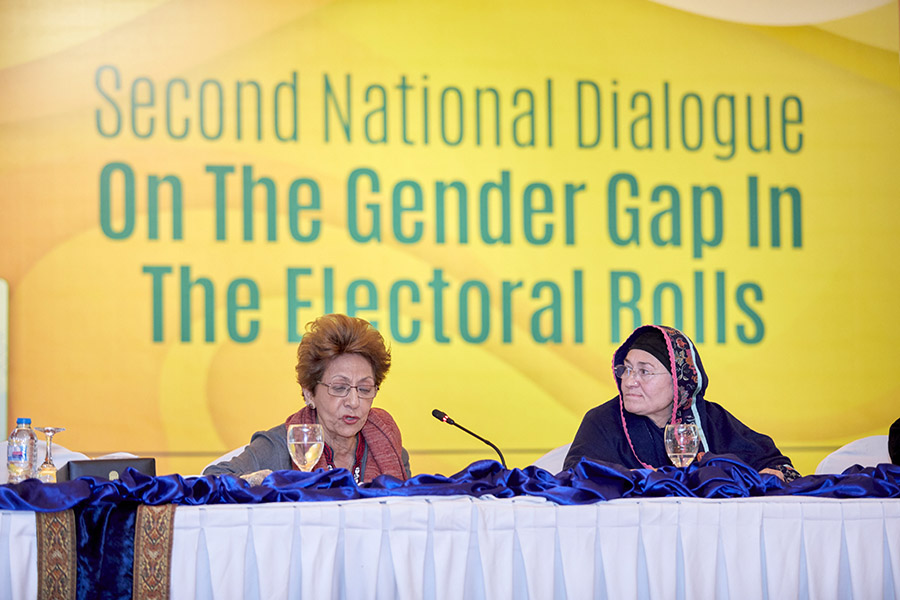 After the 2018 elections, CDIP set about working with various institutions to improve and strengthen democratic practices. This assistance included introducing reforms and tools such as strategic planning processes and modern organizational technology, updating official documents and guidelines, promoting sectoral learning and collaboration, and producing research papers and other knowledge products.

CDIP supported the ECP in introducing, piloting, and institutionalising critical electoral and institutional reforms: setting up a Federal Election Academy to lead all internal and external capacity building programmes; adopting an inclusive approach to the post-election review process; developing an operational plan for local elections; devising a long-term strategy to close the gender gap in the electoral rolls; introducing anti-harassment training for ECP staff; and using a robust monitoring mechanism to ensure timely and effective implementation of a strategic plan. The ECP’s new leadership will anchor its priorities and five-year agenda around that plan.

In previous years, Pakistan’s electoral discourse had been dominated by an identity-based, rhetoric-driven form of politics. CDIP helped move the conversation toward issue-based and citizen-centric proposals, culminating in political parties taking a more policy-driven approach, as manifested in policies covering education, environment and climate change, and youth and employment. The more policy-based debate continues now at the national and provincial level. Political parties have become more engaged in formulating ideas around the socioeconomic challenges faced by citizens, leading to evidence-led policy research in areas such as the social contract, women’s empowerment, and environmental challenges, thus translating citizens’ needs and aspirations into party politics.

One of the chief reasons for the success of CDIP’s interventions, said Zaidi, was the embrace of reforms by the ECP. “The ECP is raising the bar for accountability and transparency in elections, and as an electoral management body with parliamentary oversight,” she said.

Meeting the Needs of All Citizens

In addition to the outreach CDIP achieved with women, the team worked to integrate the voices of people with disabilities into the political process. Programme interventions not only expedited the passage of the Islamabad Capital Territory Rights of Persons with Disability Bill by the National Assembly but the House also passed a motion to form a special committee on persons with disabilities. 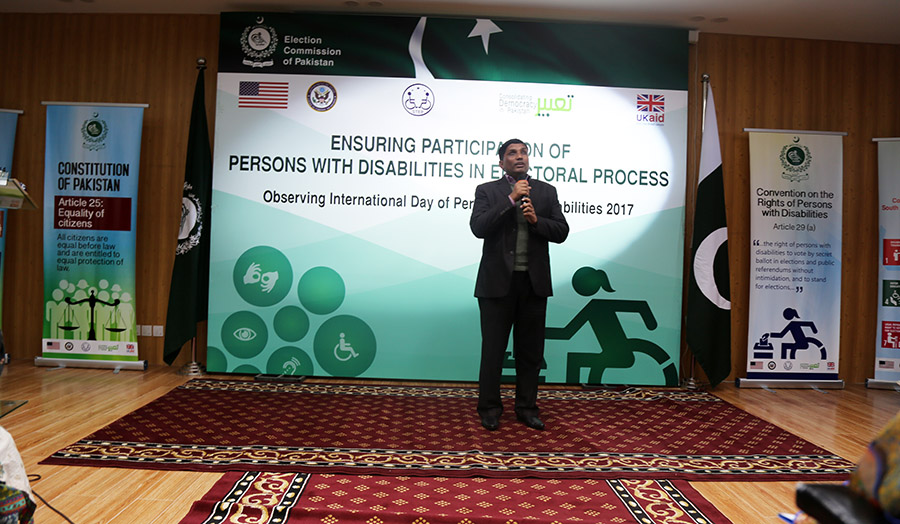 The Speaker of the National Assembly also announced that the Constitution of Pakistan would be translated into braille and the website of the National Assembly made accessible for visually impaired people. The Senate passed a resolution to make all public buildings, hospitals, and recreational and educational facilities accessible for persons with disabilities. And the Federal Directorate of Education committed to ensuring that all public sector education institutions in Islamabad are accessible.

By the end of the programme, CDIP left behind 21 policy, regulatory, and institutional improvements that have a significant positive impact on the lives of citizens and the approach of state bodies, including:

Finally, CDIP sought to equip civil society groups with the tools they need to carry on the programme’s work. While Pakistan has always had a dynamic civil society, many civic groups lack a nuanced understanding of the internal workings of state institutions and the democratic vocabulary, especially mechanisms such as public petitions to the Senate and participation in public hearings.

CDIP worked with 15 civil society organisations to facilitate their working relationships with institutions such as the ECP, parliamentary committees, human rights institutions, and political parties. “This helped create result-oriented engagement whereby the work done by these organisations catalysed policy shifts through collaboration and participation in agenda-setting,” said Zaidi.

“While we recognize that the process of democratic consolidation in Pakistan will be an incremental process,” she concluded, “We see clear indicators of a thriving political culture essential for a stronger social contract between citizens and the state.”