Few countries have experienced as much change in the past 30 years as Ukraine: independence, a switch to a market-based economy, the Euromaidan Revolution, foreign occupation of its territory, and a heavy currency devaluation, to name just a few of the events that have characterized this unsettling era.

For Ukrainians, dealing with constant change, unresolved issues, and the economic impact associated with them gives rise to pessimism and mistrust of institutions, public and private. Restoring that trust and building a more functional and inclusive economy are central to the prospects of a better life for Ukrainians, and a more self-reliant Ukraine.

The Financial Sector Transformation (FST) Activity, implemented by DAI since 2016, is a U.S. Agency for International Development (USAID) project that continues the agency’s decades-long commitment to restore public confidence in the Ukrainian financial system. In the past year, FST has played a crucial role in passing and implementing five laws critical to a more modern, competitive, and transparent financial sector. These laws will allow for new financial market actors, instruments, products, and services while facilitating local and foreign direct investment. Collectively, they will lead to more competition and consumer protection—and less tax evasion and financial crime.

For example, President Zelensky recently signed the Regulated Markets and Derivatives Law, which distinguishes and modernizes the equity, bond, derivative, money, and commodity markets. It puts in place the organization, oversight, information, and legal conditions needed for buyers and sellers of financial assets and commodities to trade and settle transactions transparently and efficiently.

This law—which USAID began supporting and developing in 2011—paves the way for derivatives, green bonds, credit-linked notes, and other structured finance products needed to spur the growth of local and international finance.

Of particular importance is the framework for commodities futures, such as grains and metals—Ukrainian exports—and energy. The new law will help create a more transparent and efficient financial infrastructure that allows producers and buyers to lock in prices and execute exchanges through a clearinghouse that tracks and nets the value of agreements to minimize risk.

“Our ultimate goal is to see Ukraine become a hub for energy trading and agriculture,” said Robert Bond, FST’s Chief of Party. “The derivatives law sets that up. In addition to financial futures, we estimate the market for agricultural futures at $8 billion, and energy futures at more than $9 billion. This will really change things.”

The National Securities and Stock Market Commission said: “Ukraine is poised to adopt one of its most radical financial bills in a decade, paving the way for a liquid energy market and the necessary instruments to minimize risk. This law will bring the biggest changes in Ukraine’s capital markets in the last 10 years. In the past we had introduced laws related to banks, but nothing of this magnitude. Everyone who has worked on this law has made sure that it would not be just a formality.”

FST raised public and institutional awareness about the law so that people could understand its importance and content, bringing in the largest commodity exchange in the world—the Chicago Mercantile Exchange—and a commissioner from the U.S. Commodities and Futures Exchange Commission, who spoke directly with parliamentarians. FST worked with other international financial institutions and the International Monetary Fund (IMF) to consolidate support for the law, which is aligned with EU Directives as laid out by the EU-Ukraine Association Agreement.

Passage of the Regulated Markets and Derivatives Law comes on the heels of four other laws that DAI and USAID helped craft and pass, including legislation to protect consumers of financial services, reform the tax system, stop money laundering, and regulate nonbank financial institutions. Following is a summary of this legislation and the lessons we learned in helping push these important economic reforms over the line. 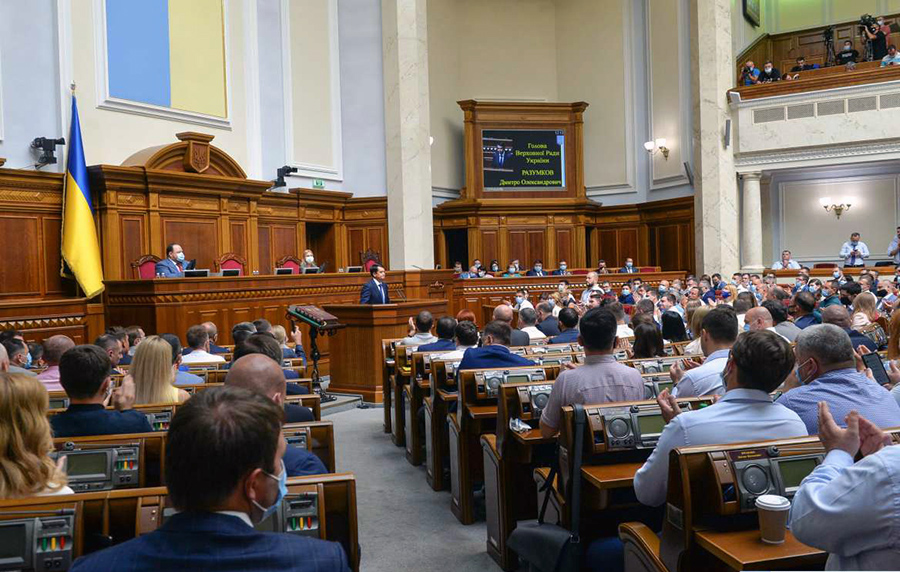 USAID has been on the side of users of financial services in Ukraine for more than a decade. In 2011–12, an early USAID project drafted and introduced into Parliament two laws—a Truth in Lending Law providing consumers with the right to information about loans, and a Consumer Protection Law allowing regulators to penalize financial companies and banks. The first law was adopted by Parliament in November 2016; the second, in September 2019.

FST monitored the implementation of the Truth in Lending law by surveying the retail credit practices of financial institutions and conducting several waves of “mystery shopper” exercises. The findings: a uniformly low level of compliance and inadequate enforcement by financial authorities. FST made these findings public, highlighting habitual violations such as misleading customers and charging hidden fees on loans, which undermine public confidence in the financial sector.

Based on the findings, FST drafted a legal brief for the National Bank of Ukraine (NBU), outlining the steps necessary to improve compliance. The report galvanized public and international organization support for a new Financial Services Consumer Protection law, which was passed in September 2019, and in June 2019 the central bank created a new consumer protection division.

“This legislative victory was the result of a sustained nine-year effort by USAID,” said Bond. “Without USAID’s efforts, consumers of financial services would still be uninformed, often deliberately, about the costs of credit, and unprotected from predatory lending practices.”

Stemming the Outward Flow of Funds

In Ukraine, offshore schemes to evade taxes have resulted in significant losses of state revenues, estimated at 6.7 to 8.4 percent of the state budget of Ukraine in 2017. In 2017, Ukraine set about stemming these losses by going after base erosion and profit shifting (BEPS), launching an OECD-compliant action plan to reduce tax avoidance. The action plan targets companies taking advantage of internal transfer pricing to shift profits to affiliated companies in tax havens outside Ukraine. DAI worked closely with its subcontractor Ernst & Young to participate in drafting a comprehensive law to implement the action plan. To win support, FST facilitated public-private discussions on the law; partnered with the NBU, Ministry of Finance, World Bank, IMF, and OECD to hold a public Forum on International Tax Cooperation (#BEPSinUA); and engaged members of Parliament as a technical resource on the contents of the law.

BEPS bill No. 1210 was introduced in Parliament in 2019 and became law in May 2020. The law amended the tax code to stop the inappropriate use of double tax treaties and introduced more transparent transfer pricing rules between affiliated companies. Among the likely results of its reforms:

Money laundering and efforts to combat it are in a technological “arms race” as digital money moves in seconds across accounts, institutions, and countries. Money laundering reportedly cost Ukraine $12.3 billion in 2018 alone. In 2012, the Financial Action Task Force (FATF), the global watchdog and standard-setting body, introduced new international norms for anti-money laundering (AML), which it updates annually to keep pace with a digitally driven financial system. Instead of the typical “check the box” rules, FATF standards require a national AML regime to be based on an in-depth assessment of AML risks, focusing on those that are material to a country and strengthening the institutions that enforce it.

Back in 2017, FST engaged two international experts to work with Ukraine’s NBU, the Ministry of Finance, and the Financial Monitoring Unit to develop a new AML regime that meets FATF and 4th EU AML Directive requirements and addresses the recommendations of international institutions such as the Council of Europe’s MONEYVAL and the IMF. After many months of review, the Anti-Money Laundering Law was approved in December 2019.

“This law fundamentally transforms Ukraine’s framework for preventing and combatting money laundering,” said Bond. “Bringing Ukraine’s AML framework into compliance with international standards was also a trigger to the disbursement of a €500 million macroeconomic support facility and approval of the $5 billion to $6 billion IMF Extended Fund Facility, which were tied to passage of the law.”

Under the new law, financial institutions and advisers must take adequate and proportionate measures to deal with higher-risk clients (such as politically exposed persons) and report suspicious transactions to the Financial Monitoring Unit. These new rules will require a focus on complex or unusual transactions, rather than a conveyor belt approach of reporting all transactions above a certain threshold—a system easily gamed by those trying to avoid detection. There is also a requirement for better identification of clients, which will, in turn, lead to more efficient investigation of crimes.

The law also targets the concealment of true asset ownership, which is often used to launder the proceeds of bribery, kickbacks, and other illicit activities into real estate, legal businesses, shell companies, and private accounts. Identifying and exposing the true ownership of assets is a powerful AML tool; the new law requires financial institutions to conduct substantive analysis of clients and their business ownership structures.

This major legislative change entrusts the central bank and the commission with the regulation and supervision of insurance, leasing, lending (including by credit unions, pawnshops, and financial companies), and factoring markets, as well as construction financing and non-state pension funds. The new law eliminated the existing understaffed and underfinanced regulator, the National Commission for Financial Services Markets Regulation, which was considered ineffective and too aligned with industry interests.

“[This law] helps create a fair and competitive regulatory framework, levels the playing field for financial institutions, and increases trust and transparency in the market,” said FTP’s head of legal activities. “It also solves a regulatory arbitrage problem, where regulatory standards for activities of certain nonbanks were much lower than standards for banking activities, often to the detriment of financial services consumers.”

Public debate over this law lasted for four years. USAID supported its adoption, providing legal and technical advice and organizational support at every step of the draft law consultations. The team worked in Parliament to educate and inform members how these reforms would benefit consumers, eliminate dubious companies, and strengthen the financial sector. It built public awareness of how the law would benefit citizens while at the same time working to reassure the financial sector, many members of which saw benefit in a status quo lacking strong oversight.

Throughout the past decade, the most important factor in crafting, revising, and finally passing these laws was the coming together of multiple parties to work in concert, from start to finish. USAID and DAI made dialogue a priority, with and between the government, the private sector, and the general public. FST also had the support of a financial sector legislative working group of international financial institutions active in Ukraine—the IMF, World Bank, and the European Union.

“It wasn’t easy, but we had allies,” said Bond. “The reception was great from the Ukraine counterparts including the NBU and the securities commission. We worked with the Parliament on all drafts, and today we are still an active member of parliamentary working groups focused on finance and banking.

“We put a lot of effort into publicizing and explaining these laws to get everyone on board.” Promotions and events included international conferences, study tours abroad, panel discussions, and white papers. “A lot of education needed to be done.”

The FST team doesn’t expect to see an influx of new market entrants or investment just yet, but already Ukraine has seen an uptick in competition and some weeding out of weaker and non-compliant institutions. “We don’t see ‘quick wins’—the full impact will take time,” said Bond. “But now the legal framework is in place to develop capital and commodity markets, to create new financial instruments, to protect investors and consumers, and to root out corrupt business practices. The key now is implementing and enforcing the new rules.”