Political crisis or no, Egypt’s government cannot afford to keep ignoring the issues that sparked two popular revolts in as many years. Issue number one for most Egyptians, especially young Egyptians, is employment. To meet the need for jobs, policy makers must do more to improve Egypt’s business enabling environment (BEE), not only at the national level, but also in the local administration trenches.

The pro-reform government that ran Egypt from 2004 until Hosni Mubarak’s fall in 2011 made substantial progress in improving the BEE, but focused almost entirely at the national level. Its aim was to create conditions that would support growth in the top tier of Egyptian business and attract foreign investors to partner with and buy high-tech services from them. Not coincidentally, this top-tier group included a large number of Mubarak friends and family.

Although some positive steps were taken to improve the BEE for small businesses, such as the creation of a one-stop-shop for start-ups, reform at this level was left primarily to donors and donor-funded organizations. Pilot projects rarely turned into sustained initiatives, leaving small businesses at the mercy of the thoroughly unreformed bureaucracy in thousands of district offices across Egypt. Down at the local level, where small businesses meet local administration, this “micro-BEE” is what really matters.

New research from one of my thesis students at the American University in Cairo (where I chaired the public policy department until this past July) sheds light on what will be needed to fix the “micro-BEE.” Ahmed Alaa’s survey of small groceries explored how day-to-day interactions with government have changed at the local level since the January 2011 revolution.

He was particularly interested in the prevalence of corruption before and after the revolution, among formal and informal (unregistered) small businesses, and in formal and informal areas. Roughly two-thirds of Cairo’s 18 million inhabitants live in informal areas, unofficial subdivisions erected illegally on agricultural or state land. Globally, about one in three city-dwellers in developing countries lives in an informal area, from Bangkok’s Klongtoey to Brazil’s favelas. These areas are often hives of economic activity, virtually all of it operating without benefit of government oversight. But researchers have only rarely examined this large and growing economic sector.

Ahmed’s research found, as he had hoped, that corruption had fallen in the formal areas after the revolution. Unfortunately, it was not an increase in democracy that caused the drop; rather, the regular parade of inspectors with their hands out had stopped after the revolution because the police had disappeared from the streets.

Although it remains unclear just why the police withdrew (as they did all over Egypt), a side-effect of the officers’ disappearance was to effectively close down the local administration’s extortion racket. Before the revolution, a small grocery could expect a couple of visits a month from inspectors from various ministries, threatening fines for often-imaginary offenses and collecting bribes to overlook them. Without the police to back them up, and facing a newly emboldened population, the inspectors were too scared to come around. 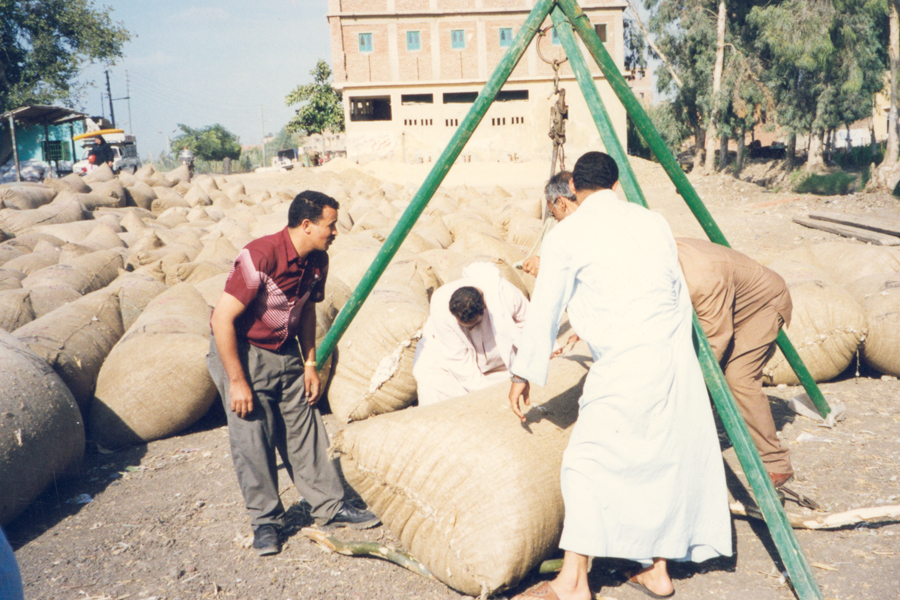 In the informal area that he surveyed, there was no change in corruption. The people in these neighborhoods received no visits from either police or inspectors before the revolution, and none after. Location in an informal area arguably provides small businesses with safety in numbers.

As expected, none of the businesses surveyed in the informal areas was registered (an option unavailable to most of them, in any case). Surprisingly, though, not one of the small groceries in the formal areas was officially registered, either. Many of the older ones had made repeated attempts to register, but in the face of unending demands for additional paperwork and yet more bribes and time wasted, they gave up. Groceries established since the revolution, however, had not even bothered to try. AUC mini-research projects found the same pervasive informality even in high-end malls and chic upper-middle-class neighborhoods. In both locations, entrepreneurs cited an inability to complete the registration process.

It appears that the local officials simply have no intention of allowing these owners to register. By stringing small businessmen along, officials maximize their bribe collection opportunities during the registration process. Even more valuable, the business owners, forced to give up or operate outside the law, are then at the mercy of inspectors and their taxpayer-funded armed backup.

This “bribe-enabling environment” remains in effect not for a few weeks or months, but in some cases literally for generations. As perennially illegal businesses, unregistered shops can be closed down for any offense whatsoever, or no offense at all, and have no recourse to the courts.

No wonder Tunisia’s produce vendor Bouazizi burned himself to death in front of that police station.

The corrupt micro-BEE system keeps millions of youth in developing countries, like Bouazizi, locked into a straitjacket of informality. They cannot find formal jobs offering the wages, benefits, and job security that would permit them to marry and start a family. Their employer, if they can find one, is most likely informal, too, although even large firms and the government itself increasingly rely on workers without contracts or benefits. They may well live in an informal area, where access to services—especially educational and social services—is constrained and residents face severe social stigma on top of everything else.

These findings underscore the need to tackle corruption at the local level, where new enterprises and jobs are created, particularly by and for poor people. These systematic, nationwide extortion operations, mistakenly termed petty corruption, suck money and energy out of the base of the pyramid and channel it upward in an ever-widening fountain of cash that deadens competition and stifles innovation at all levels.

Finally, the research points to the need for micro-BEE reform that addresses the security system as an essential element in an inclusive growth strategy. Bouazizi’s heirs deserve a future that can deliver not only jobs but lives without official harassment.