When the U.S. Agency for International Development (USAID) launched the Financial Sector Transformation (FST) activity in 2016, Ukraine was in a deep financial crisis. Its lead financial regulator, the National Bank of Ukraine (NBU), was managing the closure and liquidation of close to 100 banks and addressing the need to nationalize the country’s largest bank, PrivatBank, after financial malfeasance. Ukrainian consumers and businesses were poorly served by a financial system that lacked modern instruments such as retirement savings, affordable debt, and investment products to support entrepreneurs, not to mention consumer protections for average citizens.

Today, although Ukraine continues to be a challenging environment—particularly in light of an oligarch-dominated business landscape; changes in the Presidential administration and parliament; the COVID-19 pandemic; and heightened tensions with Russia—a new ethos has taken hold. The FST activity has fostered new types of finance for consumers and businesses, given pensioners transparent access to their retirement savings, and supported reforms to the regulatory system that protect consumers, thereby boosting trust in the system. Ukraine is on its way to becoming a place where efficient, competitive, and fair financial services are available to both consumers and businesses.

Over almost three decades, Ukraine has received support from donors such as USAID and the European Union, and international financial institutions including the International Monetary Fund, the European Bank for Reconstruction and Development (EBRD), International Finance Corporation, and the European Investment Bank, in critical sectors such as energy, agriculture, and small business. Additionally, the World Bank has provided technical expertise, especially in the financial sector, and provided economic support loans. FST built on three previous generations of USAID support when it set out to achieve the following goals:

FST’s design was ambitious, but flexible, allowing the project to take advantage of opportunities as they arose or to pivot when the environment became less conducive to policy change. For example, none of the financial sector reform laws that FST designers assumed would be in place when the activity started in late 2016 were in fact passed by its parliament, the Vekhovna Rada, until August 2019, two-and-a-half years into the project’s implementation. Despite these delays, when reform laws did pass, they laid a foundation for other important reforms.

Financial sector laws and modernization efforts supported by FST include the following: 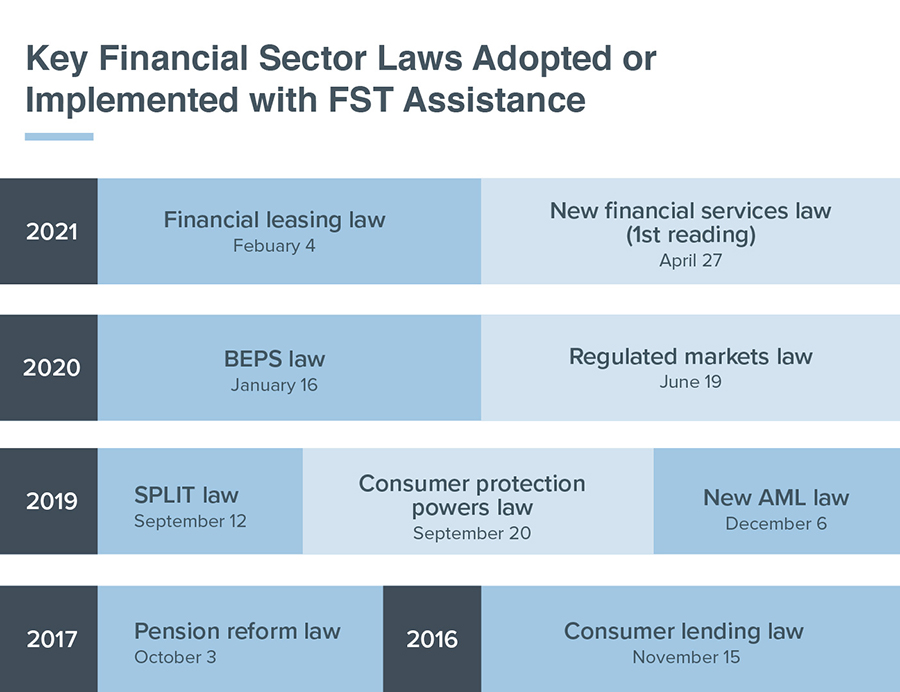 In addition to its policy reform work, FST improved overall financial literacy and increased consumer protections. Historically speaking, Ukrainian consumers have been poorly served by the financial sector and lack tools to better understand modern financial services. Early on, FST used a standardized baseline survey to measure the nation’s literacy and identify gaps to address through activities such as the development and nationwide adoption of a high school financial literacy course for tenth graders; the rollout of an afterschool “Me and My Money” financial education program; community events for young people in rural areas hosted by the U.S. Peace Corps; financial empowerment activities for internally displaced persons, the elderly, the unemployed, and vocational students, implemented by the Ukrainian Women’s Fund; and the launch of the first-ever online loan comparison tool—Liga.Money—that allows consumers to shop and compare car, mortgage, and consumer loan products.

In 2021, FST re-measured Ukrainian financial literacy and found that Ukraine’s score had risen from 11.6 to 12.3 on the standardized scale, moving past countries such as Italy, Georgia, Romania, and Montenegro. 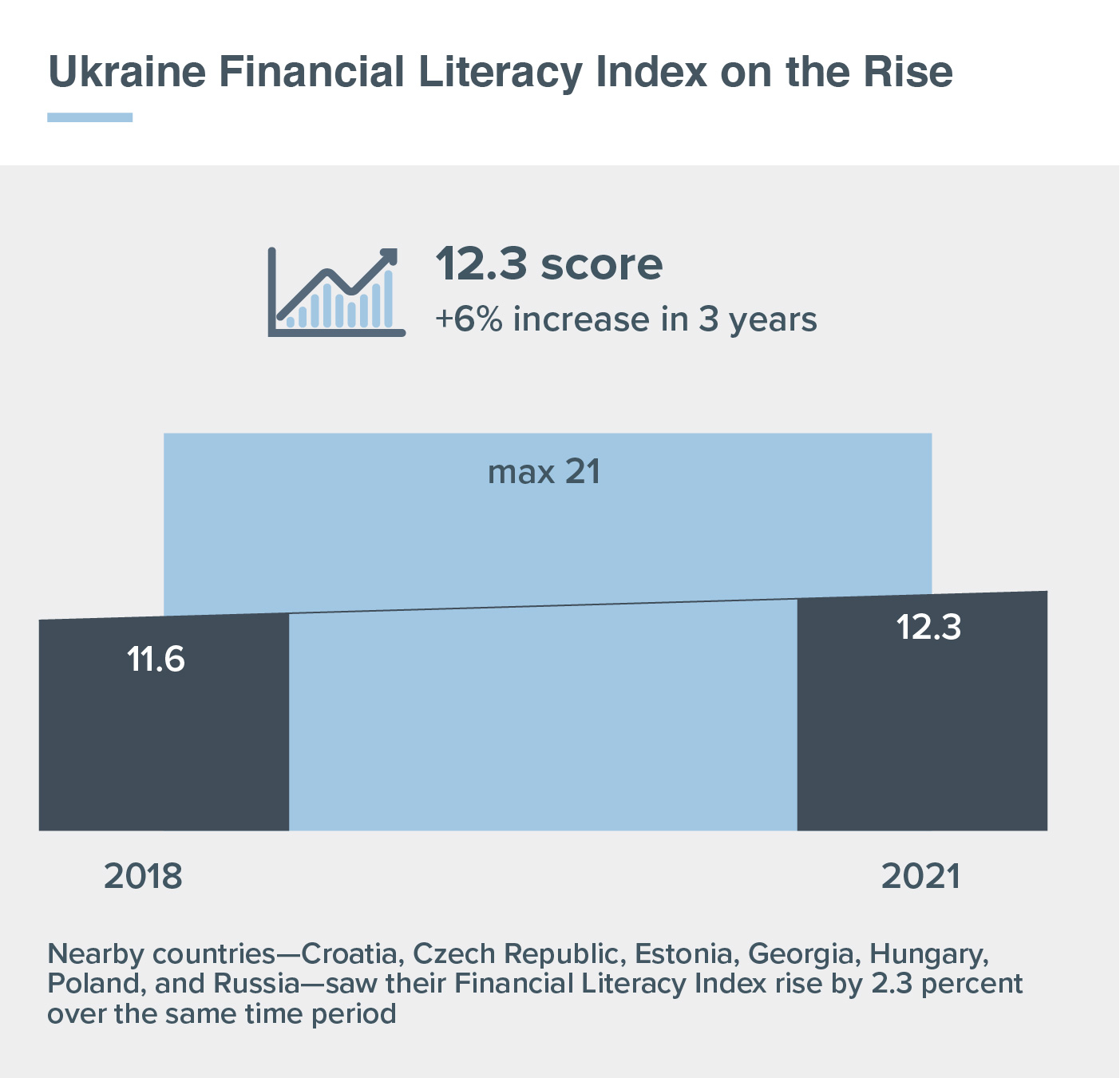 Leasing—the buying of an asset by a financial leasing company for its rental back to a lessee (an individual or business)—was FST’s focal point in its efforts to expand access to finance for SMEs. However, the Ukrainian market for leasing presented two obstacles: 1) a lack of access to capital (domestic and foreign) by leasing companies for on-leasing and 2) limited awareness and understanding by SMEs of leasing as a viable financial product.

Through partnerships with the U.S. Development Finance Corporation, Ukraine’s Government Business Fund, and the European Investment Bank, the project raised €800 million in leasing capital. Additionally, the project supported the Ukrainian Union of Lessors—the leasing industry’s association—to build its institutional capacity and membership services, resulting in a nearly 60 percent membership growth, from 17 to 27 member companies. The addition of new members and professional development offerings in a host of areas (information services, market studies, advocacy, promotion, and networking) enables the union to continue to provide services to the leasing sector well beyond FST’s closure. Due in part to FST’s initiatives, leasing activity has more than doubled from UAH 23.3 billion in late 2016 to UAH 53 billion (almost US$2 billion) in early 2021, with particularly strong growth in transport and agricultural equipment leases.

In late 2016, Ukraine’s pension system was in a state of decline. The government was unable to meet its pension obligations to retirees due to low retirement ages, low contributions, and a deficit in the pension account. Starting in 2017, FST spent two intensive years working on pension reform in close coordination with the Ministry of Labor, the Pension Fund of Ukraine, the International Monetary Fund, and the World Bank, resulting in a series of game-changing outcomes including the passage of a pension law in October 2017 that increased basic payments while raising the eligibility ages for pensions. The law also led to the procurement of IT equipment for the Pension Fund that enabled—for the first time ever—pensioner enrollment and information storage in a central database. FST also supported the roll-out of online services to active workers and pensioners that allowed workers to enroll and verify benefits, records, and employer contributions transparently, and helped the Pension Fund issue public service announcements about its services, all of which creates more confidence in the system.

Given Ukraine’s strategic location on the Black Sea and large agricultural and energy sectors that have the eye of global investors, FST spent considerable time working with financial sector actors to conceptualize the creation of a world-class, integrated center for capital and commodity markets trading, known as NEXT-UA. This market would function as a multi-asset trading hub for agricultural commodity, energy, and financial derivatives, concentrating liquidity in one marketplace.

On June 12, 2021, the Prime Minister signed a Memorandum of Understanding with USAID, the EBRD, and the American Chamber of Commerce to develop and implement the all-in-one derivative marketplace. NEXT-UA will transform Ukraine’s capital and commodity markets, provide businesses with risk management tools, create savings and investment instruments for ordinary Ukrainians, and contribute to sustainable economic growth. Finally, the marketplace would address corruption and market manipulation through the introduction of transparent rules and regulations. NEXT-UA remains as the next large hurdle for Ukraine in its financial sector transformation.

FST’s legacy lives on in the better products available in its financial marketplace, the enhanced protections in place for consumers, and the improved financial literacy of current and future generations of Ukrainians. FST supported Ukraine to modernize and develop a fairer, more transparent, and more responsive financial market—a critical building block toward its goal of becoming a regional financial market leader.