When people think of solar energy, they often envision banks of solar panels producing electricity that powers lights and household appliances. While the use of photovoltaic cells to convert sunlight into electricity can contribute to reducing carbon emissions, another important and simpler use of the sun’s rays often goes overlooked: the generation of usable heat.

This past year, Dr. Nofri Yenita Dahlan dedicated herself to advancing the use of this technology, called solar thermal energy, in her native Malaysia. With the support of an Association of Southeast Asian Nations (ASEAN)-U.S. Science and Technology Fellowship, Dahlan’s work culminated in convincing Malaysia’s Ministry of Science, Technology and Innovation (MOSTI) to advance solar thermal research and development into its revised long-range Renewable Energy Technology Roadmap. 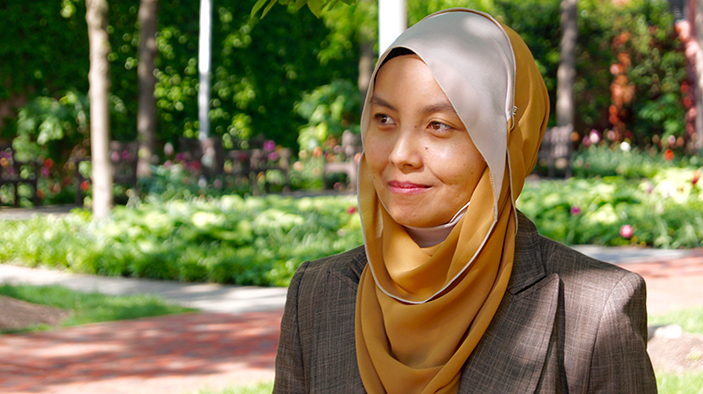 As a lecturer and researcher in electrical engineering at Universiti Teknologi MARA, with a Ph.D. in energy economics, Dahlan is well versed in solar thermal energy and its applications in industry, business, and households. But the fellowship introduced her to the practical challenge of turning scientific research and evidence into actionable government policy.

“It turns out that policy is hard to do,” Dahlan said. “It is not easy to just come up with a code. We needed to work with a lot [of] other ministries—finance, trade, and more. It takes a lot of integration of ministries to come out with a solid policy.”

Dahlan was one of 14 early- and mid-career scientists—out of 63 applicants from eight countries—who was awarded the Science and Technology Fellowship, which was managed by the ASEAN-U.S. Partnership for Good Governance, Equitable and Sustainable Development and Security, a U.S. Agency for International Development (USAID) program implemented by DAI.

Dahlan was motivated by a potential energy consumption crisis that Malaysia faces as it undergoes rapid economic and population growth. The cost of electricity in Malaysia doubled over the past year and the country has turned to building more coal-burning power plants to meet its growing energy needs, thereby increasing carbon emissions and threatening Malaysia’s long-term energy sustainability.

More than one-quarter of the energy produced in Malaysia is used by the industrial sector, with 60 percent of that used for heating. Nearly one-third of this heating-related energy consumption is used to generate low- to medium-level heat to dry products such as fruits, fabrics, latex gloves, and automobile paint. Dahlan advocates that solar thermal energy could provide a sustainable and renewable energy source for this niche.

Solar thermal systems absorb heat from the sun’s rays and use a hydraulic system to transfer the heat directly to water heaters or air dryers, replacing the use of fossil fuels and electricity. Dahlan estimates that if 5 percent of Malaysia’s low- to medium-level industrial heating was switched from extractives-based systems to solar thermal systems, then 1,577 gigawatt-hours of energy could be conserved per year, eliminating almost 400,000 tons of carbon-dioxide emissions or roughly the equivalent of the electricity consumed annually by 163,000 U.S. homes.

When Dahlan began her quest, the path to widespread adoption of solar thermal systems in Malaysia faced numerous hurdles. The policy framework and support programs for renewable energy were focused on electrical generation for the power grid rather than thermal applications. As such, there was no standard code for installing these systems—comprised of solar collectors, pumps, pipes, valves, and other components—and few suppliers who could provide the equipment. No Malaysian government ministry owned the responsibility of drafting policy and creating special financial incentives for solar thermal energy, and policy makers and business owners were generally unaware of its potential industrial applications.

Dahlan found the perfect opportunity to advance her case through the ASEAN-U.S. Science and Technology Fellowship program. The fellowship placed her in MOSTI’s Renewable Energy Research Centre and Standard and Industrial Research Institute of Malaysia. Here, Dahlan discussed the uses and benefits of solar thermal energy with government officials; in turn, they taught her about the on-the-ground challenges of transforming good ideas into practical policy.

To train fellows to communicate more effectively, DAI conducted workshops on presentation skills, journalistic writing, making “elevator pitches” about their work, and writing policy briefs. Dahlan took advantage of these new skills during her numerous meetings with government officials and business owners, including a particularly memorable use of her elevator pitch.

While attending an energy conference, Dahlan encountered the executive director of the ASEAN Center for Energy (ACE), Dr. Sanjayan Velautham, whom she had emailed a few days prior proposing a collaboration between ACE and her fellowship network. After listening to her idea in their short meeting, the director was convinced of its value and agreed to move forward on a collaboration. ACE is now pursuing an official partnership with the Science and Technology Fellows working on energy issues, an important step in strengthening the development of science-based energy policy throughout the entire ASEAN region.

Beyond the experience she gained in policy making, Dahlan said that one of the most fulfilling aspects of her fellowship year was networking. Dahlan shared her work in Malaysia with key fellowship progam partners in the United States. As winner of the 2015 ASEAN-U.S. Science and Technology Fellow Video Contest, she traveled to Washington, D.C., as the fellowship program’s first ambassador and presented her research to several U.S. bodies, including the State Department, USAID, and DAI.

“This fellowship is fantastic,” Dahlan said. “Before, I sat in a lab. Now I know people in ASEAN, the United States, and elsewhere.”

As her fellowship year came to a close, Dahlan helped MOSTI officials take important steps toward securing a cleaner and more energy efficient future for Malaysia. She co-authored a policy brief outlining the potential of solar thermal energy for the industrial sector and the barriers to its wider adoption. Dahlan and her ministry counterparts led meetings with key government officials and private sector stakeholders to raise awareness of the technology. She is also planning with the United Nations Industrial Development Organization to conduct energy audits of Malaysian factories and identify 10 sites to serve as demos for industrial solar thermal energy systems.

In short, Dahlan exemplifies the spirit of the ASEAN-U.S. Science and Technology Fellowship, working directly with ministries in their home countries to strengthen science-based policy making and advance regional cooperation in science, technology, and innovation.