Despite having the largest economy in Africa, around half of Nigeria’s population still lives in extreme poverty. A few hundred miles east of the new skyscrapers and shopping malls of Nigeria’s commercial capital of Lagos, the Niger Delta—made up of nine oil-producing states and home to more than 31 million people—defines the country’s stark contrast in living conditions. Even though it is a major oil-producing region, much of the Delta’s population lives in remote villages and survives on subsistence farming. Exacerbating this poverty is a lack of modern agricultural equipment and supplies that farmers need to improve crop yields, as well as limited access to markets in which to sell their harvests.

Historically, development practitioners may have viewed subsidizing agricultural supplies as the solution to such predicaments. While these programs had some success in the short term, the models were often unsustainable after projects closed and subsidies ended. When the U.K. Department for International Development launched the Market Development in the Niger Delta (MADE) project in 2013, it took a different tack and sought to address the root causes of rural poverty. Utilizing a Making Markets Work for the Poor (M4P) approach, MADE helped leading agribusinesses to see the business value in providing technologies, inputs, and services directly to small farmers and training farmers to use them. 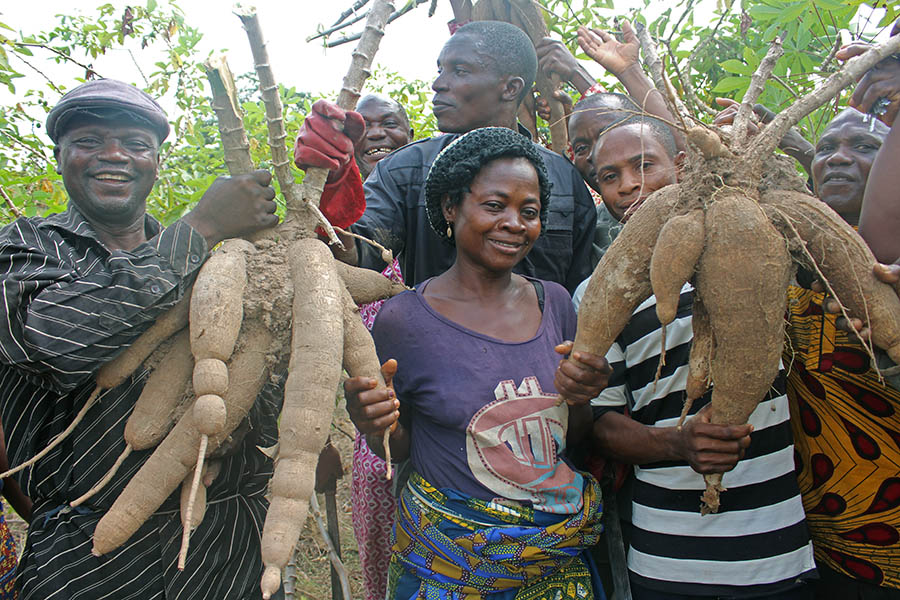 The results of implementing this M4P approach in the Niger Delta have been encouraging. The recently completed first phase of MADE helped more than 150,000 small farmers increase their incomes. A second phase, MADE II, will continue applying these market-driven strategies toward a new goal: to reduce the growing number of Nigerians caught up in modern slavery.

Most small farms in the Niger Delta produce below their potential due to poor soil and limited access to fertilizer, good seeds, and other farming inputs. The major agricultural supply wholesalers and retailers that sell these products and services are concentrated in city centers and do not see small farmers in far-off villages as a profitable audience. In turn, rural farmers are often unaware of how spending a little more on better agricultural inputs could help them increase their productivity and incomes.

MADE identified six value chains with high potential to benefit small farmers—poultry, cassava, palm oil, fisheries, finished leather goods, and agricultural inputs—by remedying this disconnect between input suppliers and farmers. The project partnered with 25 leading agribusinesses and 488 retailers in these value chains to help them understand the potential profit to be gained from targeting rural farmers with affordable products and services.

MADE worked with these companies to reach new rural markets to promote their products and to change the attitudes and practices of smallholder farmers. 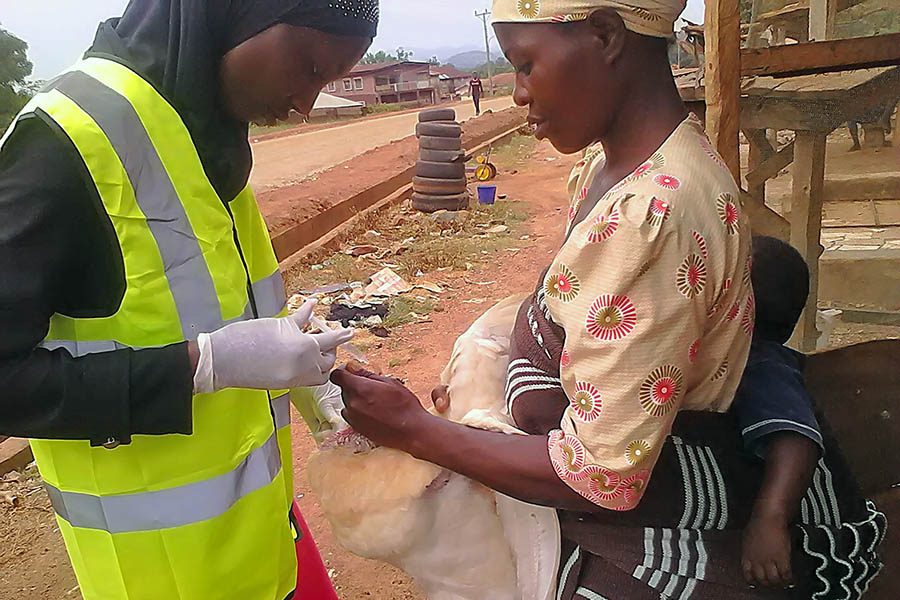 A prime example of MADE’s M4P approach was the project’s work in the cassava value chain. Nigeria is the world’s largest producer of cassava, an important food staple and cash crop. However, most cassava farmers do not use high-quality seeds (stems), fertilizer, or modern farming methods. In addition, rural businesses that process cassava products do not have contacts in large markets that could help expand their sales. MADE facilitated linkages between small cassava processors and major buyers, and worked with agricultural supply companies to target sales and promotions at cassava farmers in distant villages. These activities reached more than 79,000 smallholder farmers, improving crop yields and market sales and helping to generate an additional £7 million in income across the cassava value chain.

Similarly, MADE worked with farmers and business partners to improve earnings from poultry, particularly for women who raised chickens. Seeing that disease and inefficient feeding and watering were contributing to high mortality rates for chickens, the project helped veterinary service providers understand a business case for targeting small poultry farmers with vaccination services, high-quality feed, and other products. MADE also co-sponsored product demonstrations in rural areas, motivating 36,000 farmers to purchase vaccination services for the first time. As a result of farmers learning about and buying new veterinary products and services, chicken mortality rates were reduced and poultry farmers experienced a collective £2 million increase in incomes.

Across all six of its target value chains, MADE’s market systems approach generated an additional £14 million in incomes for farmers and small businesses and helped 155,000 Nigerians increase their incomes by an average of 15 percent.

The Roots of Human Trafficking in Nigeria

While MADE was assisting farmers in the Niger Delta to improve their livelihoods, new challenges shook the economic foundations of the country. With oil making up 75 percent of the country’s exports, a dramatic fall in oil prices starting in late 2014 led to the Nigerian naira losing 70 percent of its value compared to the dollar over two and a half years. Beyond causing a deep recession and widespread unemployment, the sharp currency devaluation indirectly resulted in thousands of Nigerians migrating out of the country through informal channels and being lured into modern-day slavery.

In many ways, farmers living in villages where MADE worked were able to weather this economic downturn due to their mix of subsistence and cash crops. They even saw increased demand and higher prices for the food staples they produced—such as rice, cassava, and palm oil—when the products became too expensive to import. However, others in the Niger Delta—young people in particular—still did not see farming as a profitable future and were drawn to seemingly more lucrative livelihood opportunities in Europe.

“Edo state in the Niger Delta in particular has long been a major feeder of these economic migrants,” said Bill Grant, Global Practice Lead for Market Systems Development at DAI and an adviser to MADE. “For decades, women from Edo had been moving to Europe, intending to work in legitimate businesses and send money home. However, many of them were compelled or coerced into commercial sex work, with some women establishing their own, lucrative operations. In turn, they used traffickers to lure young girls from their communities back in Nigeria. In Edo, this business became socially recognized and accepted as a means to increase household income, creating a well-established ‘value chain’ of human trafficking from Edo to Europe.”

This steady stream of recruits would turn into a flood once the naira deflated. With the now highly uneven exchange rate, the euros earned by Nigerians abroad are worth more than twice as many naira as before, creating a veritable gold rush for jobs in Europe. While at one time mostly females were trafficked from Edo, this new wave of migration was made up primarily of men. Unfortunately, once migrants leave the familiarity of Nigeria on the overland journey through Niger and Libya, they become easy prey for traffickers and most are extorted for additional money or sexually abused in exchange for passage to Europe.

After arriving in Libya, or onshore in Italy or Spain, victims find out too late that their traffickers’ promises of well-paying jobs turn out to be bonded labor or sexual exploitation accompanied by coercion, isolation, and physical abuse. The brutality of these traffickers and the sheer number of emigrating Nigerians caught up in modern slavery has received attention from CNN, The New Yorker, and other international media. In 2016 and 2017, an estimated 58,000 Nigerians made it across the Mediterranean into Italy, while more than 20,000 Nigerians are thought to be trapped in Libya. While no exact number exists to quantify these people, Nigeria is thought to be the leading source of trafficking victims in Europe.

The newly launched MADE II project will continue supporting farmers in the Niger Delta while also addressing the economic push factors in Edo that lead to human trafficking, as part of the U.K. Government’s campaign to end modern slavery around the world. While many young people in the Niger Delta do not see farming as an aspirational path out of poverty, they lack knowledge about other career fields and the skills needed to enter them. Taking a market systems approach similar to the project’s first phase, MADE II will work with companies and professional associations to present value propositions for investing in Edo state’s workforce. The project will also partner with NGOs and education centers that currently provide job skills training to help them tailor their curricula to market demands and connect with populations susceptible to trafficking.

Through an in-depth market analysis, MADE identified six sectors well-positioned to create appealing job opportunities in Edo: high-end agribusiness, information and communication technology (ICT), renewable energy, wholesale and retail, cosmetics, and the entertainment industry. While there is evident potential for growth in these industries, connecting rural populations with jobs that exist primarily in major metropolitan areas will take vision, creativity, and unique partnerships.

Nigeria’s television and film industry, for example, known as “Nollywood,” is the third-largest in the world. The industry generates US$800 million a year in revenue while employing more than 1 million people. Nollywood movies and TV shows are popular around the African continent and are increasing in demand due to new satellite and streaming services. In the coming years, the industry is forecasted to hire a large number of skilled workers, such as set designers, production assistants, lighting and sound technicians, and make-up artists.

To connect job seekers in Edo with opportunities in Nollywood, MADE will work with industry professionals and associations, such as the Nollywood Association of Hair and Makeup Artists, to create online and in-person training courses for in-demand production skills, as well as establishing internship programs. In an effort to bring entertainment industry jobs closer to home, MADE will also explore a public-private partnership to develop a mini film village in Edo state, offering producers an affordable shooting location with cost-effective labor. 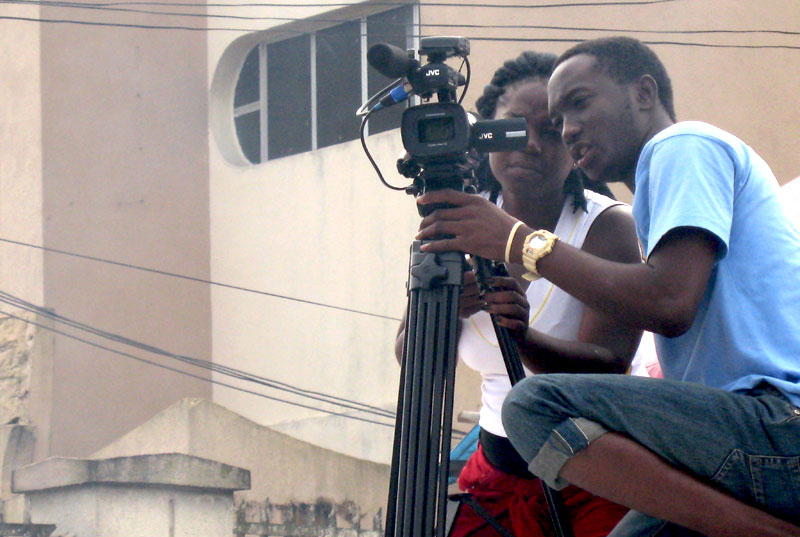 MADE II will facilitate trainings to give jobseekers skills needed to work in Nigeria's growing entertainment industry. Photo: Partnership Initiatives in the Niger Delta.

Nigeria’s ICT industry presents another promising opportunity to make job connections in Edo. With more than 92 million internet users in Nigeria, demand is high for ICT products and services and the sector has been growing by 30 percent a year. As Google, Dell, IBM, and other multinational tech companies plan to expand into Nigeria, demand for skilled ICT workers will soon outpace the supply.

While most ICT jobs are based in Lagos, MADE II will work with companies to demonstrate how they can benefit from supporting the development of an ICT workforce in Edo or setting up operations in the state. Edo is already home to five universities and offers the market advantage of a lower cost of living and affordable labor. The project is already supporting a new technology hub in Edo, and will partner with companies and local organizations to hold ICT trainings and career fairs, offer mentorship programs, and expand the reach of a new coding academy in Edo.

Over the next two years, MADE II will apply this market-driven, partnership-based approach across other targeted sectors in Edo, while continuing to improve productivity and profitability for small farmers. The project aims to raise the incomes of 155,000 Nigerians, 30,000 of whom are in Edo, alleviating poverty in Nigeria and furthering the U.K. Government’s vision of a world without slavery.