More than 23 million children in Pakistan do not attend school. More than half of children who start at government schools drop out before completing primary school. These stark facts are harming a rising generation of Pakistanis already vulnerable to unemployment, instability, and extremism. And while upper-class Pakistanis enjoy excellent private schools and universities, much of the rest of the country has become resigned to derelict classrooms and substandard government-provided education.

Until recently, that is.

Launched in 2013 and funded by the U.K. Department for International Development (DFID), the Alif Ailaan campaign is moving education to the front and center of the 2018 general election, in which 342 seats in parliament are at stake. In vying to make 2018 the “education election,” Alif Ailaan has inspired groups throughout Pakistani society—rural and urban, rich and poor, traditional and progressive—to mobilise in demand of improved public education. The campaign’s “ask” is succinct: 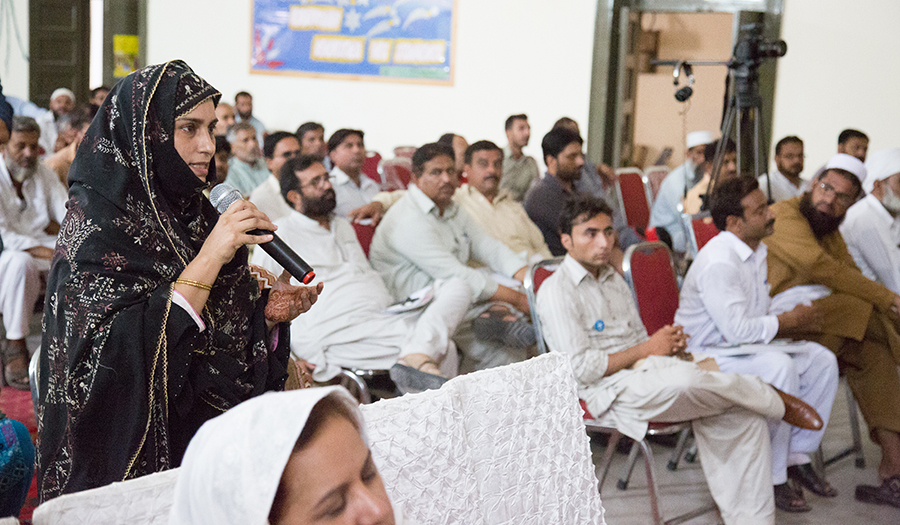 Approximately 1.5 million supporters have signed up for the Alif Ailaan campaign, including politicians from all major parties, educators, parents, and civil society organisations. The campaign’s Facebook account has amassed more than 2 million followers. The question now is whether this groundswell will translate into more and smarter funding for public education, more prestige for teachers, and higher-quality schools for millions of marginalized kids.

Managed by the Transforming Education in Pakistan (TEP) project, Alif Ailaan is implemented by DAI and London-based subcontractor Accadian Ltd. TEP’s assistance is not designed to pay for books or desks or rehabilitated schools. Instead, given that the Constitution of Pakistan guarantees government-funded education to every Pakistani child between the ages of 5 and 16, TEP’s job is to make parents aware of this right and help them demand high-quality schooling for their children. At the same time, TEP encourages politicians to deliver on the right to education and work with education providers to improve the quality of that education.

Pakistan is a high-priority country for U.K. assistance. In designing the TEP programme, DFID concluded that a crucial long-term intervention—in terms of stabilisation, economic development, countering violent extremism, and meeting the needs of a fast-growing, younger population—would be to help tackle Pakistan’s education emergency. Alif Ailaan is on track to get more Pakistani children into school, stay there, and achieve literacy, numeracy, and other skills so they can contribute to a more stable and prosperous Pakistan. 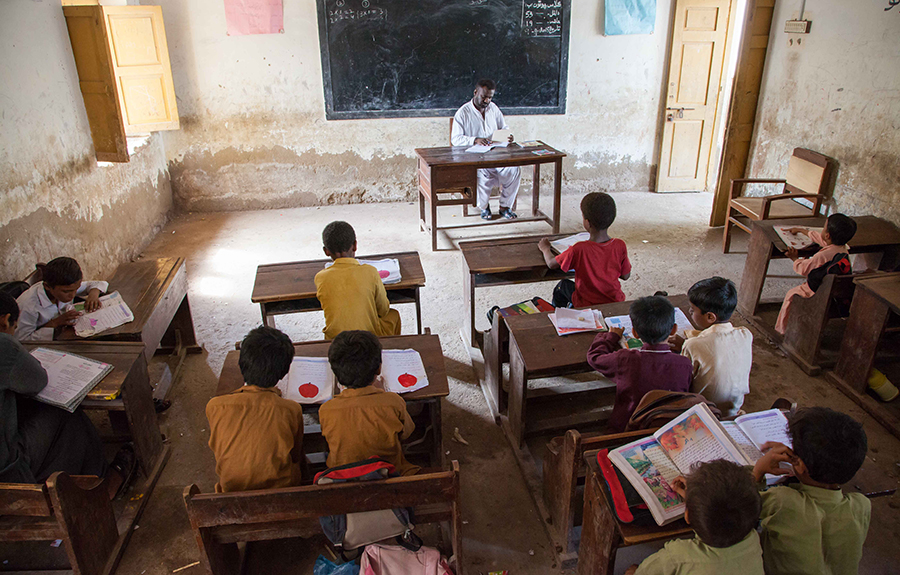 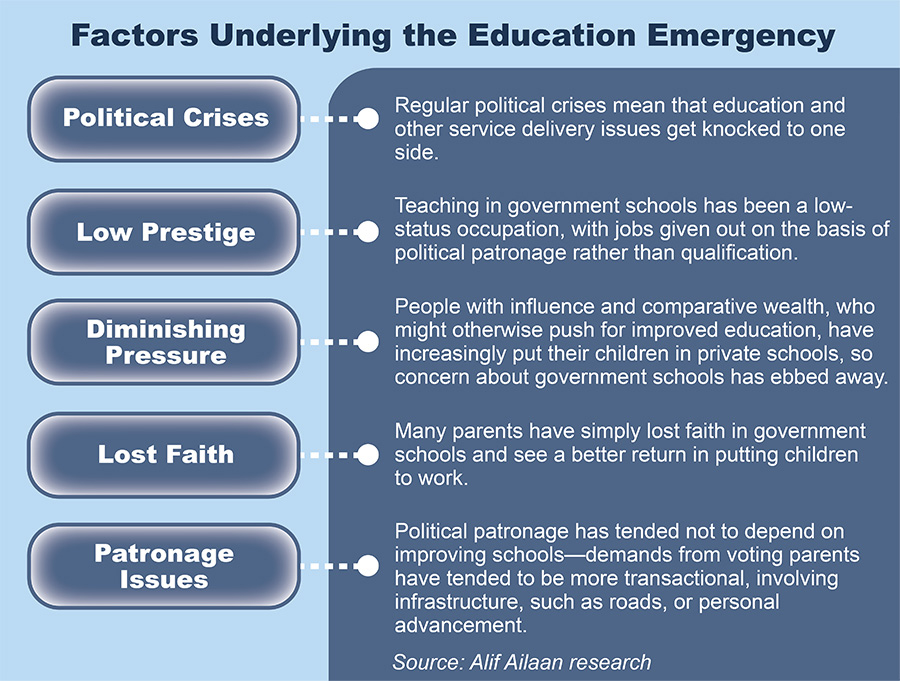 In making education politically relevant, DAI and Accadian have drawn on political campaigning techniques to influence political will and mobilise demand. TEP identified and analysed every interest group involved in providing education and constructively engaged those group members willing to be part of positive change while marginalising any blockers. This outreach required creating a strong, independent, authoritative campaign that would become the leading voice for education reform in Pakistan, which is what we have built with Alif Ailaan.

The TEP team, led by DAI’s Mosharraf Zaidi, emphasizes smart political engagement to support reformers across all the main political parties and groupings, and to empower other stakeholders in the education system to understand what needs to be done and start doing it. As we come to the second set of elections to have taken place during the campaign (the first was in 2013), we will be refocusing attention explicitly on voters—especially parents—and helping them to make education a salient issue for politicians seeking their votes.

The Importance of Smart Startup

In setting up Alif Ailaan, the most important first steps we made were recruiting the best Pakistani campaign team we could find. Our Islamabad-based team of more than 25 people were personally selected and have spent a good deal of time developing their skills as campaigners, first and foremost, and as professionals working to DAI’s high standards. We invested the rest of our inception period in testing our strategies and systems. TEP is not a typical development project—it involves generating political will and pushing for change—so we have been fortunate to have the active support of our colleagues at DFID Pakistan.

At the outset, TEP had to establish Alif Ailaan as a voice in the public political discourse but first and foremost to make people acknowledge the “education emergency” they face. Key to this was our lobbying the government to research, calculate, and publish a nationally accepted number for out-of-school children. Achieving consensus in 2013 that there were 25 million Pakistani children out of school was a critical initial achievement. Through sustained advocacy and communications efforts, TEP has since developed a layered understanding and buy-in around the four themes central to fixing Pakistan’s education system: budgets, data, quality of teaching, and the focus on government schools. 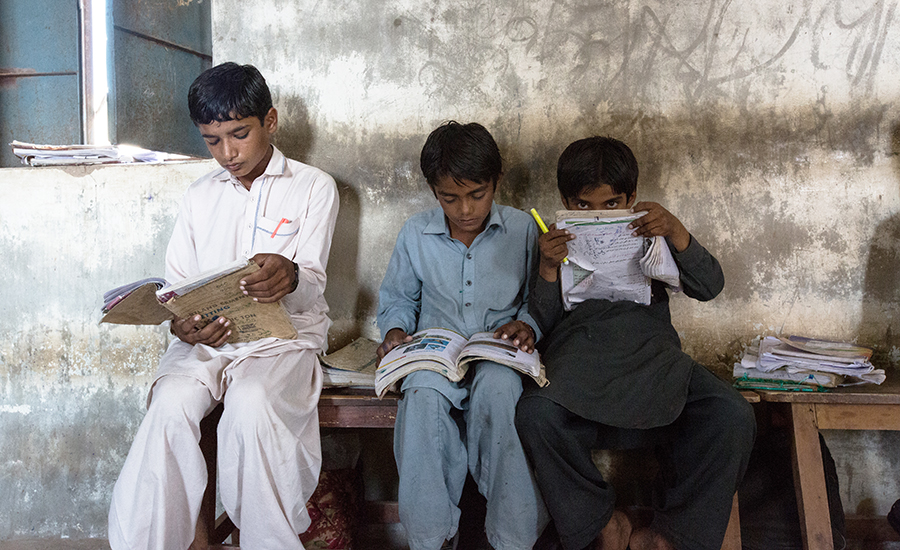 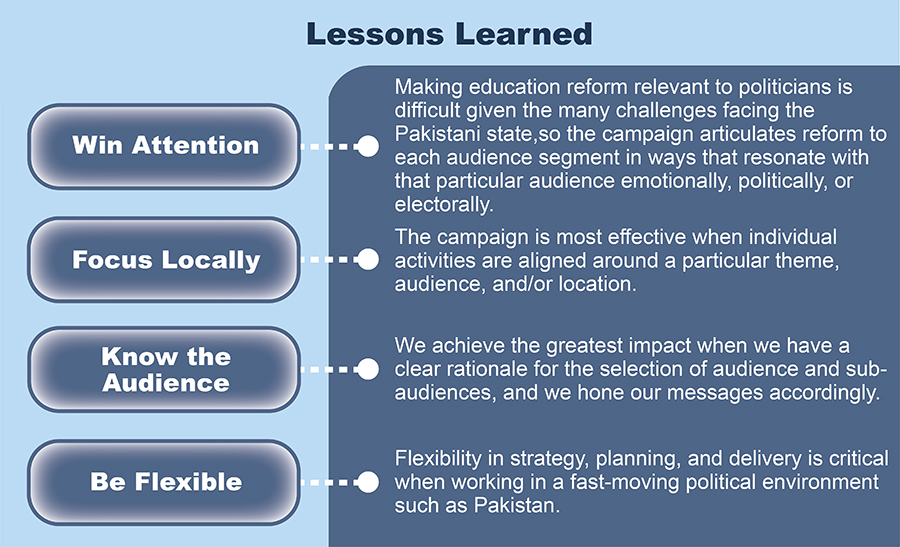 TEP made education more pressing and locally relevant to politicians by building and launching a nationwide data platform that uses the government’s own statistics to rate school districts in areas such as grades, security, water and toilets, enrollment, and gender equity. This data is open to parents and politicians alike and has spurred social and political discourse and competition between districts to move up in education rankings. We have also partnered with MIT media labs to track the frequency of media coverage on education stories, which is important to measure the impact of the campaign. 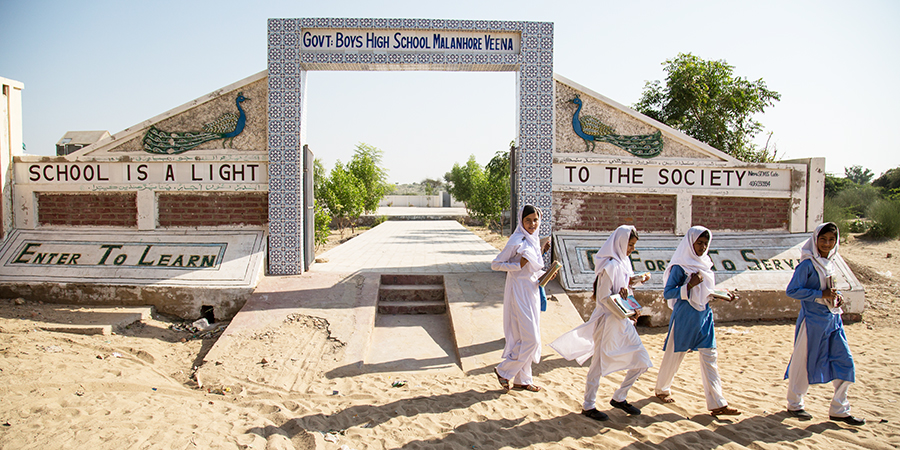 The 2018 election will mark the end of the current Alif Ailaan campaign and present TEP with two challenges: first, achieving the “education election,” where education gets due prominence and the parties compete in their commitments to improve it; and second, achieving sustainability—embedding practices and ownership so the urgent work of transforming Pakistan’s education system can continue.

TEP has already embedded education issues into the political and social discourse, set a precedent of data-informed journalism and reporting on education, pioneered ground-breaking publications, and lobbied for the government to research, calculate, and publish a nationally accepted number for out-of-school children. During and following the 2018 election, we believe the government provision of high-quality education for all Pakistani children will remain a top agenda item in manifestos and political party campaigns. Whoever wins the election will have much work to do. We and our partners will play our part in holding them to their commitments.