The influx of refugees from across the Syrian border is straining Lebanon’s economy and host communities. Since 2011, Lebanon’s population has increased 30 percent to around 6 million as a result of this influx, and its young people are increasingly anxious to enter the workforce. Many even wish to start or join social enterprises to help address the country’s challenges, including problems stemming from the refugee crisis. But until recently there were few avenues for pursuing this work.

Funded by the U.K. Foreign and Commonwealth Office (FCO), the Lebanon Social Enterprise Pilot Project—known locally as the SoUK.LB Social Enterprise Hub—has assisted 19 such enterprises in the past year. Among these is the SE Factory code school, an initiative of The Nawaya Network, a local nongovernmental organization. SE Factory offers introductory and boot camp courses to train working-class young people on the technical and soft skills needed to get jobs in the tech industry.

In less than three years, SE Factory graduated 59 students through its boot camp, and nearly all received job offers within six weeks. Their new employers include local tech startups, such as those participating in the FCO’s UK-Lebanon Tech Hub accelerator programmes, and regional tech companies. Early indications show SE Factory graduates earn higher salaries on average than they would have earned coming straight out of university.

In 2017, SE Factory was awarded a £30,000 cash grant from SoUK.LB, plus training and one-on-one mentorship to develop an introductory online course to supplement its in-person coding boot camps. SE Factory developed a pilot one-month pre-boot camp course—Foundation of Computer Science. Ten students new to coding graduated from the pre-boot camp and are now prepared for the full-time, three-month coding boot camp.

On February 20, visitors from the British Embassy of Beirut and the FCO Conflict, Stability and Security Fund (CSSF) attended the first Foundation of Computer Science graduation event. There, the visitors learned about SoUK.LB’s 18 other social enterprise grantees—including enterprises in health, agriculture, women’s economic empowerment, transportation, and other sectors. These grantees—competitively selected from 147 applicants—comprise idea and early-stage startups and established, growth-stage cross-sector organisations. Their missions are to create transformational social or environmental change whilst becoming financially sustainable.

One of SoUK.LB’s early-stage social enterprises won first place at the Global Social Venture Competition, a premier business competition organized by the University of California at Berkeley. The winning team, FabricAID, competed with 550 applicants from 60 countries, with teams first passing through rounds of national and regional competitions. FabricAID created a new industry in Lebanon by more easily connecting buyers and sellers in the multibillion-dollar second-hand clothing market. In the 10-year history of the competition, this is the first time a team from Lebanon reached the international finals. 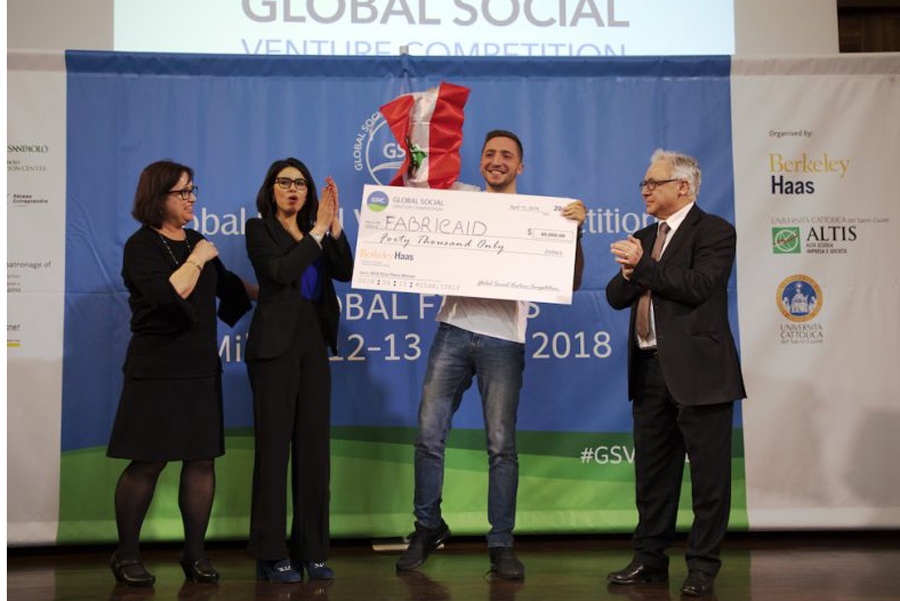 SoUK.LB is demonstrating the viability of the small-enterprise model in Lebanon to achieve social and economic impact and potential scalability. This FCO flagship project addresses the challenges to both the supply of and demand for transformational and sustainable social and economic change in Lebanon. The investment harnesses the potential of the private sector to develop, incubate, and scale ideas that can catalyze positive change and shape the creation of a distinct social enterprise sector in the country.

**Select Results from the Lebanon Social Enterprise Pilot Project** * Completed recruitment campaign for social enterprises/innovators, resulting in 183 applicants for support in training, mentoring, and funding. * Out of 147 eligible applicants, 48 percent were led by women, and 50 percent were ages 18–30. * Awarded 19 grants to start-up and growth-stage organisations and provided training sessions to 52 of these grantees. Twelve of the grantees have begun generating sales. * Disbursed £405,000 in grants. Grantees increased the number of beneficiaries they serve by 154 percent, and created 225 jobs covering full time, part time, and contractor. * Completed market study on the social enterprises' operating environment, challenges, and opportunities and an overview of international best practices that can be adopted in Lebanon. * Engaged policy makers in policy development discussions—including officials from the Ministry of Economy and Trade, Ministry of Finance, Banque du Liban, and Office of the President of the Council of Ministers.

By identifying, enabling, and sustaining Lebanon’s innovators and small social enterprises, SoUK.LB is transcending the traditional role of the grants-based challenge fund by enabling social enterprises too small for traditional financing to operate like businesses rather than development projects. It has also served to spotlight the unmet demand for such assistance, including in untapped markets outside of Beirut, where we are confident that similar assistance can succeed and ultimately benefit Lebanese communities.