March 30 marked one year since the Government of Zimbabwe declared the country’s first nationwide lockdown to curb the spread of COVID-19. The strict lockdown and enforcement measures have caused significant hardship for most citizens, but particularly for informal traders in poorer urban areas and communities that depend on agriculture for their incomes.

Agriculture is one of many sectors worldwide hit hard by pandemic restrictions and by associated disruptions in value chains. In Zimbabwe, agriculture is not only crucial for the food supply—it provides livelihoods for 70 percent of the population and makes up 40 percent of exports.

As the pandemic took hold, Zimbabwe’s Ministry of Lands, Agriculture, Fisheries, Water, and Rural Resettlement designated agriculture as an essential service. Producers were instructed to remain open to ensure minimal disruption of household and national food and nutrition security, as well as public and animal health. Yet farmers have struggled to access needed supplies and move their produce to distribution hubs, markets, and, ultimately, the homes of consumers under lockdown. The pandemic has also reduced consumers’ income and constrained their ability to travel and purchase products.

While COVID-19 threw the programme into uncharted territory, its activities did not slow down. On the contrary, taking advantage of the agriculture ministry’s clearance, the projects funded by ZAGP actually accelerated, and achieved major milestones over the past year. Rolling out digital innovations, providing access to inputs and markets, and supporting fodder production are three areas where the programme has seen particular success.

The pandemic has increased the demand for online services worldwide, Zimbabwe included. Paper-based systems are costly, labor-intensive, and slow. The Transforming Zimbabwe’s Animal Health and Food Safety Systems for the Future (SAFE) project, funded by ZAGP, is developing an information management system to provide value chain stakeholders with current information on disease outbreaks, market regulations, prices, supply and demand, weather, and financial matters. This data will enhance disease surveillance and reporting as well as serve as the basis for a comprehensive Livestock Identification and Traceability System.

Several ZAGP grantees have also rolled out a mobile application during the pandemic called Kurima Mari (“farming for money”), which assists farmers, extension services, and staff working in agricultural and rural development offices. The app has been useful during lockdown, as it enables information sharing without physical meetings and trainings. 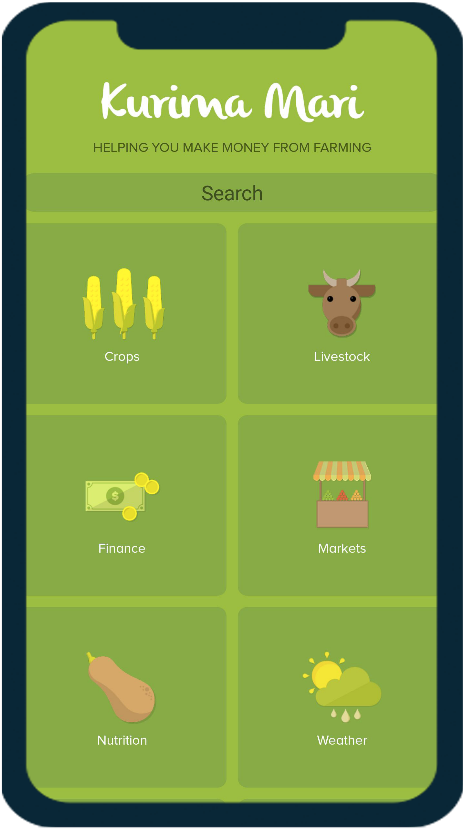 “I can now give farmers the app and they can search for the information they need even in my absence,” said extension officer Juwanyira Ruramai. “This is very helpful as I have to serve more than 400 households. So with the app, the farmers are never stranded for information. I can quickly refer to the app and get the insights I need to go and train my farmers.”

A pilot version of the Kurima Mari Beef app has been launched under the ZAGP-funded Beef Enterprise Strengthening and Transformation (BEST) project. Nearly 300 beef farmers have so far registered, and the project is targeting at least 20,000 users across 10 districts.

Under ZAGP’s Inclusive Poultry Value Chain (IPVC) project, the Kurima Mari Poultry app reaches roughly 10,000 poultry farmers and includes a feature to track the weight of chickens, so farmers have early warning of any problem with food conversion ratios. App training has been provided to 100 lead farmers and extension officers, with the goal to train others how to use it. The poultry app not only educates farmers on farming practices and procedures through videos, podcasts, and manuals—it also offers a digital marketplace where produce can be bought and sold online.

Poultry production has fallen during the pandemic, which has resulted in the scaling down of operations and reduced sales. The IPVC project is now assisting poultry producers, who have been hit hard by travel restrictions, to access inputs and markets for their broilers and eggs beyond what’s been available through the app.

Tecla Manyeruke, a member of Golden Chickens Enterprises, a farmer group working with IPVC in Masvingo province, said: “We were having challenges in buying day-old broiler chicks, feed, and veterinary medicines. The project linked us with feed companies and other input suppliers and negotiated discount purchasing on behalf of us. They also linked us to a hatchery to buy day-old broiler chicks.” 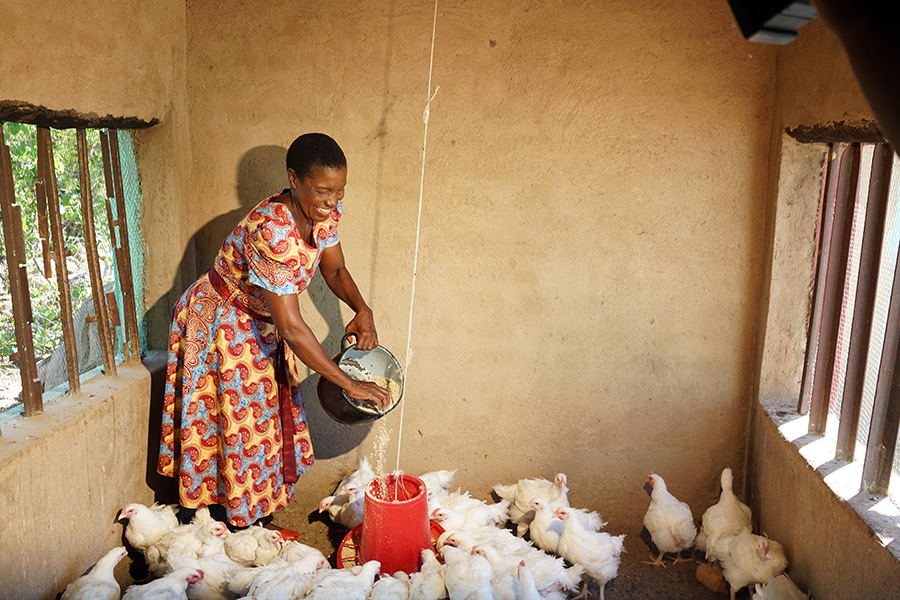 Thanks to the project’s collective bargaining and buying power, the farmers were able to buy the broiler chicks for 42 cents instead of the prevailing market price of 47 cents and were able to save $5 on every 50-kilogram millet bag they purchased.

Fodder makes up 70 percent of livestock inputs and is critical to the income-earning capacities of smallholders. Unfortunately, the spiralling costs of stock feed have put it out of reach for most farmers seeking to provide supplementary feeding for their livestock, which leaves the cattle vulnerable to worsening environmental conditions exacerbated by climate change. Cattle in poor physical condition means poor returns for livestock farmers.

ZAGP has used digital extension approaches—including the Kurima Mari Beef app—to reach farmers and support fodder harvesting. Among other features, the app provides farmers with weather forecasts and a crash course on the effects of climate change on the agricultural sector. At the onset of the 2019–20 agricultural season, the BEST project also distributed fodder seeds for farmers willing to act as “lead farmers” for at least 10 other farmers in targeted districts. These seeds were used to establish showcase plots that demonstrate best practices.

Despite COVID-19 and the lockdown restrictions, the participating farmers under the BEST project have been able to harvest and preserve the fodder crucial to their livelihoods.

Nickson Dube, a 53-year-old farmer with 35 cattle in Gokwe South district, has grappled for years with rearing his herd in a marginal area with low rainfall and therefore poor forage production. He represents this new breed of livestock producers who have ventured into the production of nutritious cattle-feeding fodder crops. “It’s my first time to grow fodder for my cattle. Previously, I would leave my cattle to graze in depleted rangelands, which have insufficient food for them,” he said. 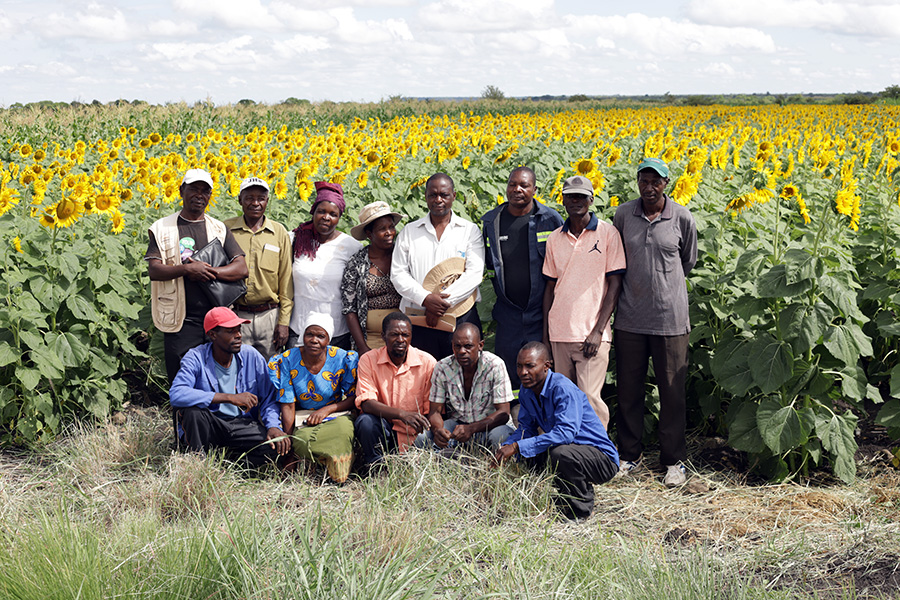 This farmers’ group in Gokwe South district in Midlands province is now involved in producing fodder including sunflower, as shown here. EU ZAGP.

The ZAGP-funded Transforming Zimbabwe’s Dairy Value Chain for the Future (TranZDVC) project took a similar approach. Lead farmer Dorica Hwengwere mentors 10 other farmers, including women and youth. Using seed provided for the demonstration plot and her own resources, she has grown maize, velvet beans, cowpeas, and bana grass on her one-and-a-half hectare field. “We have learned and increased production of homegrown nutritious feed, and during the lean season our cattle will not starve or have decreased milk production,” she said. “I have plans to use the harvested crop to make low-cost feed formulations which will lead to reduced cost of production and increased incomes through dairy farming.”

The coronavirus crisis facing Zimbabwe’s smallholder farmers is far from over. But ZAGP’s work to mitigate the effects of COVID-19 and the lockdown is paying off and promises to yield benefits that outlast the pandemic.

Neil Orchardson is the Team Leader of our project and Thembinkosi Nyathi is the Communications Focal Person.