If East Africa grows enough food to feed itself, which it generally does, why are so many of its people going hungry? This question lies at the nexus of two of Africa’s key development challenges—food security and trade—where a recent milestone event may signal a massive change in fortunes for one of the most food insecure regions of the world.

Moving food from areas of surplus to areas of need is a key objective of the U.S. Agency for International Development (USAID)’s East Africa Trade and Investment Hub (the Hub). But moving food across Africa is not as simple as, say, driving a truckload of fruit from Florida to New York. To move food from country to country in Africa, traders need to navigate numerous differences between countries, among them: grain standards, currencies, border customs, and protectionist policies, not to mention corruption, inadequate roads and modes of transport, and storage. 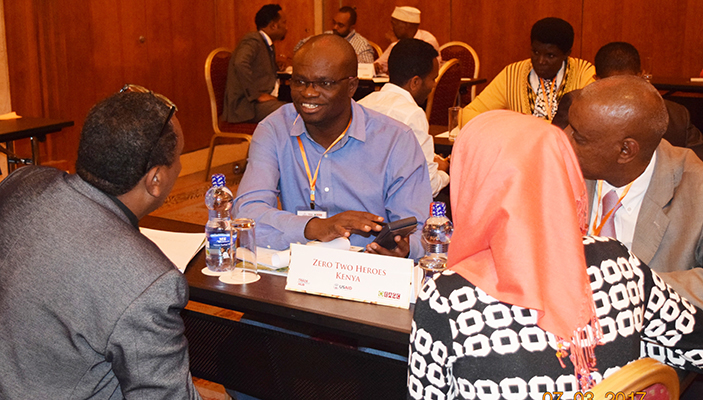 During food shortages, East African countries have historically been more likely to turn to the World Food Programme or other donors for handouts rather than to one of their neighbors for trade. However, as demonstrated at the East African Grain Council’s first multilateral grain trade facilitation forum, when food trade barriers come down, food will follow the money, African farmers and others will get paid, and the hungry will get fed.

In assisting the grain council to organize the multinational forum, in cooperation with the Addis Ababa Chamber of Commerce and Sectoral Associations, the Hub team hardly had to twist arms.

Held at the Hilton Hotel in Addis Ababa, the grain forum featured 40 Ethiopian traders eager to sell surpluses of beans, soya, chick pea, sorghum, millet, rice, sesame, and, especially, their bumper crop of maize. Maize grows well in Ethiopia, but the majority of Ethiopians do not eat it, preferring pulses such as chickpeas and lentils, along with meat. However, in neighboring Kenya and elsewhere, maize-based foods such as ugali, pap, and nzima are staples. Ethiopian farmers need income from their maize, and other countries need maize for food—the market opportunity is clear.

Joining the Ethiopian sellers, 50 buyers arrived from Kenya, Tanzania, Uganda (normally a maize seller, but suffering a 100-year drought), and other countries. Once together, the sellers and buyers found themselves to be like long-lost cousins, sitting across tables from each other and eagerly talking the same language—the language of business.

Those of us in the business—academics, agricultural economists, development practitioners—were not surprised that the forum was able to facilitate so many cross-border transactions.

For too many years, countries in Eastern and Southern Africa have relied too heavily on food handouts. The region, of course, faces recurring climate challenges such as drought that sometimes forces millions of people to seek food donations instead of growing their own or buying locally. Even during these harsh times, however, crops elsewhere in the region and continent are often growing well.

Selling maize is important to farm families in Ethiopia, as it enables them to buy sugar, cooking oil, and other nutritious foods, and pay for expenses such as school supplies. But when they cannot export their surplus, these families are more at the mercy of farming’s boom-bust cycle; that is, if they grow too much, they suffer from price collapse, and if they grow too little, they have nothing to sell, keeping them poor, hungry, and disheartened.

Historical: EAC countries were British colonies under one colonial administration; Ethiopia was never colonized and had little or no relationship with its neighbors.

Infrastructure: A paved highway connecting Nairobi to Moyale on the Kenya-Ethiopia border only opened in 2016, replacing the dirt road that had enabled only small-scale local trade. A new one-stop border post facilitates transit.

No trade linkages: Ethiopia's surplus-producing region in the northwest (Western Oromia and Amhara regions) is far from Kenya's primary grain market around Nairobi. Until now, there were few linkages between the markets.

Formal and informal barriers: These have included protectionist policies and, on the Kenya side, arbitrary and capricious unofficial duties and customs charges that complicate large-scale trade and pricing.

Economic isolation: Ethiopia is not a signatory of the Common Market for Eastern and Southern Africa (COMESA) Customary Union nor a member of the EAC or World Trade Organization; Ethiopian exports to EAC countries are subject to 50 percent duty and other restrictions.

Standards: The EAC follows its own regional standards for 1) grain quality; 2) truck freight load; 3) grain packaging; 4) sanitary, phytosanitary, and other health and safety rules; and 5) contracting and payment.

Breaking Down Barriers to Food Trade

Kenya and Ethiopia might be neighbors, but the countries had never traded on a large scale, partly because Ethiopia is not a member of the East African Community, a six-nation economic and trade alliance. However, the trade relationship between these two East African economic leaders might be changing.

Kenya recently completed a highway—the A2—and the country’s logistics companies are now getting used to sending their trucks north from Nairobi to the border post at Moyale to pick up Ethiopian goods. At the grain forum, the new land route made it easier for the Hub team to facilitate agreements on issues such as delivery terms and payment mechanisms. We also encouraged obsolete policies to be temporarily lifted. For example, Ethiopia, normally a significant maize producer, currently has an export ban on maize that was enacted four years ago after a major drought. Shortly after the forum, traders were issued permits which allowed the deals to go forward.

Founded in 2006, the East African Grain Council includes 10 member countries. The Hub team is assisting the council to find its stride as a food security champion. Across its 10 nations, there is plenty of room for consistent grain growth and harvests across the calendar. As the Hub strives to be catalytic by facilitating events such as the March 2017 grain forum, we are also building a sustainable systemic process so traders can carry on grain trade activities through the council without our intervention.

The grain forum was the type of trading event that the region needs to reduce dependency on food assistance. The Hub is facilitating its next big trading event, a rice trading forum near the common border of Rwanda, Uganda, and Tanzania. Small traders have bought into a structured process, with contract templates and payment methods agreed in advance. All that the buyers and sellers need to do is negotiate prices.

By promoting intraregional trade, we put the private sector in the driver’s seat to address food shortages and hunger in East Africa. Ultimately, open borders in East and Southern Africa should give rise to more stable markets that in turn attract investment that bolsters food security and economic growth.

Other USAID-funded projects implemented by DAI are building capacity and assisting African countries to adopt agricultural technologies, including improved seed varieties, fertilizers, and agro-chemicals, as farmers are generally reluctant to invest in technologies unless their risk is reduced. In addition, DAI is managing a project funded by the U.K. Department for International Development that awards strategic grants to promising agribusiness partners in the region. Facilitating intraregional trade and reducing market uncertainty will further encourage technology adoption, increase productivity, and, ultimately, promote self-reliance.