Like many countries, Honduras was forced to close its schools by COVID-19. As a result, the Asegurando la Educación (Securing Education) project—a U.S. Agency for International Development project to support safe schools—was forced to give up its face-to-face interaction with educators, students, and parents. But necessity is the mother of invention and, in this case, expansion. Today, by means of webinars, videos, and a digital awareness campaign, we are reaching record numbers of beneficiaries. Transitioning to remote learning has not only forced us to rethink our strategies for reaching students—it is prompting us to rethink how we reach beneficiaries more effectively.

Before virtual implementation, the Executive Leadership Program for Principals (PELE), for instance, trained an average of 45 school administrators from one or two cities per session. Since the in-person training already focused on equipping school principals with skills to lead during times of crisis, Asegurando quickly streamlined its content for online delivery, holding the first session just weeks after schools shut down.

Instead of spending staff time and resources on logistics, transportation, food, and venues for 3 separate in-person events that reached 100 principals in 3 or 4 cities, the project can now reach more than 1,000 participants in 230 cities, while expending far fewer resources. The sessions are having a positive impact on new beneficiaries as well. Principal Otilia Padilla in Siguatepeque—a city not reached before the pandemic—said, “After the training, I met with my teachers to search for other strategies that will keep students… from dropping out of school.” By November, 7 PELE sessions have registered 4,857 unique participants from 230 cities, with an average of 1,239 connecting per webinar.

Through another digital adaptation, Asegurando’s Teacher Wellbeing program began offering safe, virtual spaces for teachers to share difficult experiences and emotions with their peers. Before the pandemic, this emotional health and wellbeing activity was not a top priority; in fact, we had only implemented it for 30 educators per session over a 3-month span, and in only 82 of Asegurando’s 135 schools, with no continuation plans for 2020. However, the pandemic’s emotional impact on educators revealed a clear need for the program.

Overnight, the new virtual session almost tripled program reach to 80 participants. Capitalizing on the scalability of webinars, the program has since registered 5,669 educators from 214 schools, with 4,591 connecting live—a more than 5,000 percent increase from the first session. Asegurando conducted the program with top Ministry of Education officials. Then teachers began to host their own sessions. And the program keeps growing.

Again, the new virtual program is having its intended impact. Teacher Martha Casco in San Pedro Sula said, “It gave us hope that… we can overcome and carry out our work as teachers in the best way possible… we can reduce school dropouts during times of crises.”

Knowing that constant emotional stress can damage long-term physical health and exacerbate drug and alcohol abuse, Asegurando’s social-emotional learning program (called PASE) is emerging as one of its most impactful programs. Physical education (PE) teachers delivered 24 PASE sessions to 4,429 students from 53 schools in 3 departments during 2019. PASE-trained PE teachers immediately understood the importance of social-emotional skills building, especially during a global crisis. Unable to interact with students face-to-face after schools shut down, some teachers started recording PASE videos and sharing them on social media.

Simultaneously, Asegurando prioritized a virtual adaptation of PASE and incorporated tenets from its cognitive behavioral therapy program to create the Influencer 504 video series. These 25 videos do not require space for physical education activities. Educators have shared these videos through social media and telephone chat groups for approximately 30,000 students and their parents. The new virtual program is helping to keep students motivated and engaged in school. A ninth grade student from Tegucigalpa said, “We think positive… we shouldn’t drop out because one day this [pandemic] will pass.”

Additionally, the project invited 18 student government leaders—one from each of the country’s departments (or states)—to be Influencer 504 ambassadors. In the official induction ceremony, Vice Minister of Education Javier Menocal established the role permanently in the education system saying, “The ministry wants to take this program to every corner of Honduras.”

Asegurando’s awareness-raising campaign designed to keep youth in school had reached an estimated 332,000 people before the pandemic struck in mid-March. However, the impacts of social isolation and toxic stress demanded psychosocial and social-emotional support in the home, which now doubles as students’ classrooms. In early April, the project began developing messages to address pandemic-related emotional and psychological harm. Utilizing social-emotional learning, wellbeing, and cognitive behavioral techniques taken from other Asegurando programs, the Securing Your Wellbeing (Asegurando Tu Bienestar) awareness campaign has now provided trustworthy and relevant information and emotional health and wellbeing support for whole families across Honduras through Facebook sessions, public service announcements on 25 radio and TV stations, and nearly 1,000 social media posts. Teacher Nohelia Mendoza in Choloma said that teachers are now “creating awareness [with students and parents] that education continues, and we can all learn.” Campaign messaging has so far reached an estimated 6 million people, including international audiences. 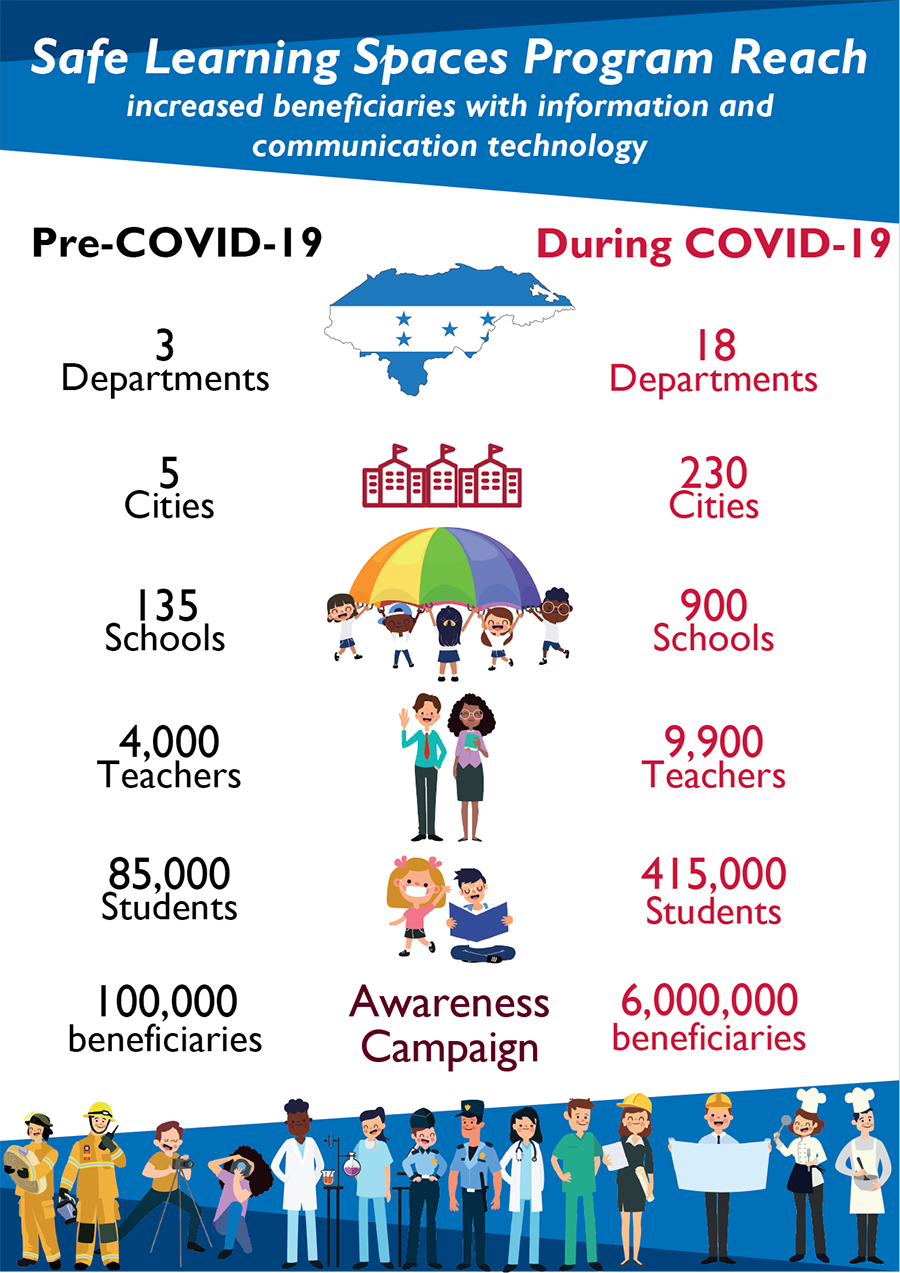 But the Asegurando team stepped up to the challenge and early feedback suggests that we delivered more quantity without sacrificing quality. When surveyed on the effectiveness of PELE, for example, 96 percent of administrators report that they understand their role as leaders better. Likewise, 89 percent of surveyed teachers said their wellbeing has increased after just a few webinars.

Now well versed in the cost-effective mechanisms needed to achieve a 5,000 percent increase in participants for teacher training sessions, our team can leverage a media network that reaches 6 million people instead of a few hundred thousand. Regardless of when in-person classes resume, Asegurando will not entirely abandon online activities.

Nor will education itself return to its pre-pandemic ways. Whereas students might previously have struggled to catch up when returning to school after a few days out sick, teachers and students can now send assignments back and forth through WhatsApp. Training and instructional videos on YouTube can reach teachers and students in remote areas for the first time. Cost-effective art and academic competitions can take place nationwide. Instead of designing and implementing new international development projects for 100 schools, donors and implementers will set their sights on 1,000 or 5,000. The applications of this mindset shift seem limitless.

Craig Davis is Chief of Party of the Asegurando project and Lucas King is an international writing consultant.