Using public-private partnerships (PPPs) to develop infrastructure that will enhance urban resilience to climate change is a promising option for countries affected by increasingly intense droughts, severe floods, and other environmental factors. Countries such as Mozambique and Vietnam are now piloting aspects of this approach, but we must address various weaknesses in it if we are to come up with a “climate-smart PPP” program. 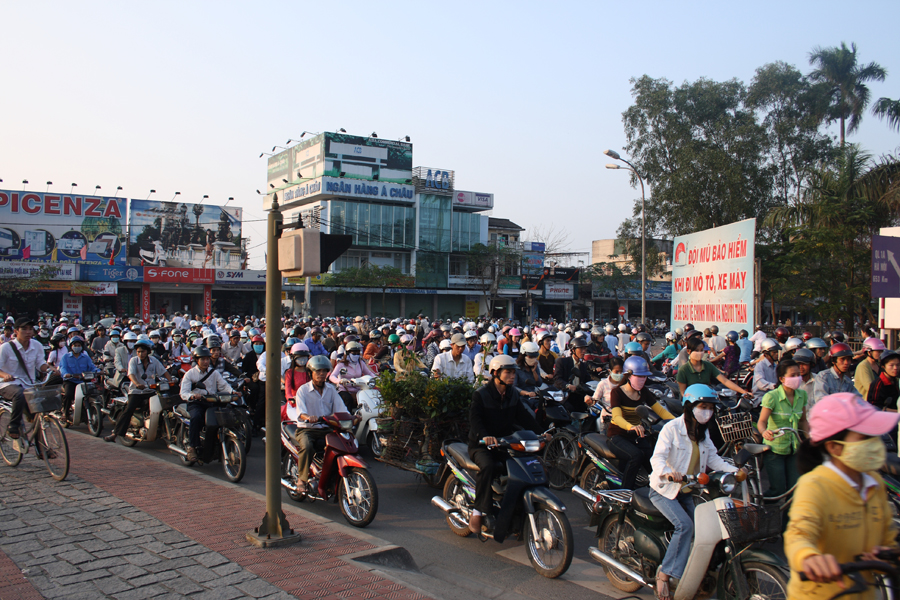 Climate change is a pressing development challenge for Vietnam. The United Nations (UN) estimates that 54 percent of Asian and Pacific urban populations live in low-lying coastal zones. Cities such as Ho Chi Minh City and Hanoi are highly vulnerable to sea level rises, stormwater surges, and flooding. They also face climate change-related consequences in rural areas (floods, droughts, and loss of crops and productivity), which become “push” factors in rural-to-urban migration. As stated in the UN report, “although the poor contribute the least to climate change, they can be expected to suffer the most from the negative impacts, whether they live in urban or rural areas”1.

Since 1960, Vietnam has seen a 0.7°C average temperature rise and a 20-centimeter rise in sea level. Global circulation models project that by 2100, average temperatures will increase by 2.3°C and sea levels by another 75 centimeters. In addition, climate models project that some areas of the country will experience heavier, more intense rainy seasons, while others will see longer and more intense dry seasons. These changes could lead to the following vulnerabilities:

Rising Sea Levels : A threat to urban areas and low-lying agricultural lands when combined with storm surge from cyclones.

Vietnam’s Ministry of Construction—the government body playing the lead role in urban development—estimates that by 2015, the country’s urban population will reach 35 million (almost 40 percent of the total); by 2025, the urban ratio will reach approximately 50 percent and there will be nearly 1,000 urban centers. According to the World Bank, approximately 70 percent of Vietnam’s gross domestic product is generated in urban centers2. This concentration of economic production and the increasing rural-to-urban migration amplify the potential consequences of climate change, particularly in highly vulnerable centers such as Ho Chi Minh City, Hai Phong, Hanoi, and Nha Trang. The potential losses are enormous. The World Bank estimates that climate-induced disasters between 2010 and 2050 could cost up to $49.5 billion in Ho Chi Minh City alone3.

Research on PPPs in the context of infrastructure development and climate change is still in the nascent stages. While PPPs in renewable energy have been a principal focus of climate mitigation strategies, the focus has been on PPP development rather than on applying a climate change lens to PPP projects. Aldo Baietti and his colleagues have taken a thorough look at the various risks and challenges involved in financing green investments4. They have also developed a useful framework for how “green infrastructure finance” can be implemented effectively. Tyler and Moench (2012) explore how cities should approach climate change by proposing a framework that recognizes infrastructure as part of a broader set of systems, agents, and institutions necessary for urban climate resilience5. The World Bank’s report on Asian global megacities emphasizes the value of combining infrastructure-based solutions with ecosystem-based adaptation measures in combatting climate change.

Still needed, however, is close analysis of the policy-level actions required to stimulate an explicit connection between PPPs and climate change, as well as methodologies and tools for how to operationalize this concept in project planning, design, and implementation. 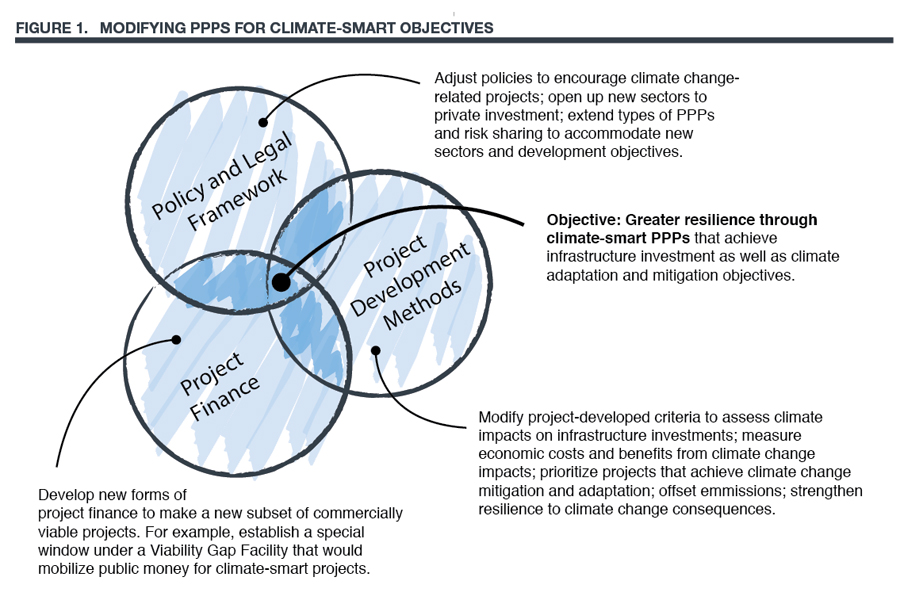 For Vietnam, a climate-smart PPP approach is well placed to grow out of the government’s ongoing reform of its PPP program, an initiative that benefits from strong political leadership. Following are recommendations, in the three core components of PPP work, on how Vietnam can adjust its program to accommodate the climate-resilience agenda. Each recommendation, while specific to Vietnam, is applicable to other countries given appropriate modification for context.

This framework must set forth the guiding principles and regulations that encourage the incorporation of climate change impact analysis and planning into project design and development. Among the principles we recommend:

Project developers must factor in the social impacts and benefits of climate-resilient designs and energy efficiencies as they identify, structure, and analyze each project, financially and otherwise. Such integrated analysis should inform the policy framework for selecting and prioritizing PPP projects for implementation. Among the steps we recommend:

Creative project finance mechanisms will be needed to address the unique risks associated with these types of PPPs.