Over the past few weeks, I had grown concerned about the lack of clear direction and energy around climate talks in the run-up to COP26. At a time when unity and cooperation are the order of the day, world leaders appeared to be in discord. But announcements at the United Nations General Assembly in New York give me renewed optimism that when the world’s leaders come together in Glasgow, we can still make significant gains toward a low-carbon future.

First, President Biden announced an increase in the United States’ climate finance contribution to $11 billion, a true re-doubling of effort after expanding U.S. funding from $2.8 billion to $5.8 billion in April this year. This pledge sends an important message of commitment and starts to close the gap on the $100 billion committed by global leaders in Copenhagen in 2009. For national delegations reluctant to travel to Glasgow due to COVID-19 restrictions and a growing sense that the meeting might be a damp squib, America’s generosity is a significant morale boost.

The other significant announcement was from President Xi, who declared that China will not build any new coal-fired power projects overseas. While China has scaled back finance for coal in recent years, it remains the single biggest financier of coal-powered projects around the world. The devil is in the detail, of course, and there is still work to be done to reduce China’s domestic coal consumption, but Xi’s statement feels like a critical step on the road to removing coal from the global energy mix.

In the Twitter buzz that followed the announcement, I found myself entranced by a pair of charts from Our World in Data. First, the global energy mix since 1800: 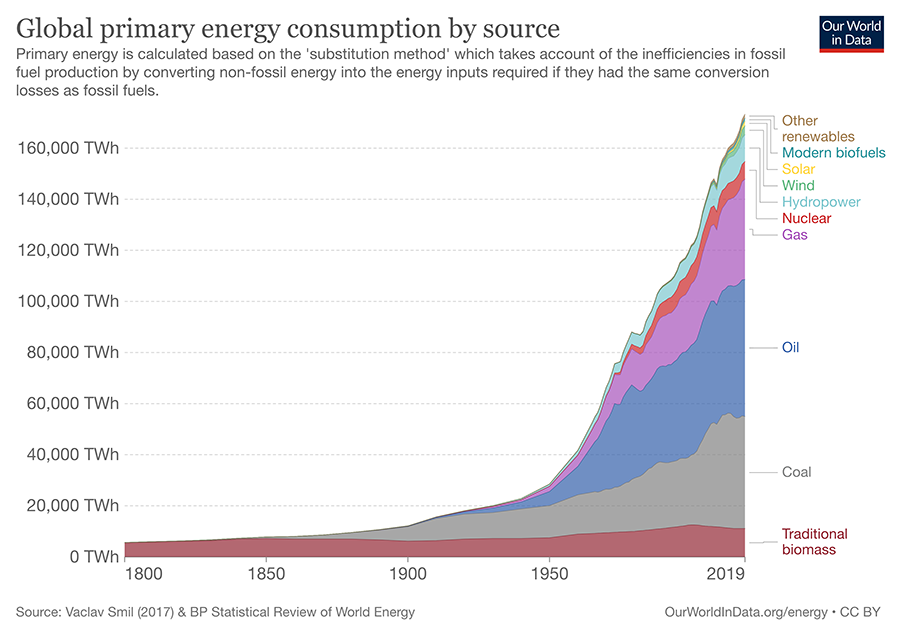 Traditional biofuels dominate until the mid-19th century, when the emergence of fossil fuels helps accelerate the industrial revolution, with more rapid diversification from the 1950s onward to include nuclear, hydropower, and then more recently wind and solar. But it is also striking that at a global level, coal remains to this day a significant fuel source, with demand having increased even in the past decade. If China’s announcement—and similar announcements by Japan and South Korea, other significant financiers of coal power, earlier in the year—curtails the use of coal, that is only positive. But the demand for energy will continue to grow. And emerging and frontier economies have a right to pursue growth in line with SDG 7 (access to affordable, reliable, sustainable, and modern energy for all). Therefore, we need to substitute for coal, not merely eliminate it, and it is incumbent on the major actors and emitters to expand renewables and other clean energy sources.

The second graph that struck me is one showing the decline of the coal industry in the United Kingdom over the past century: 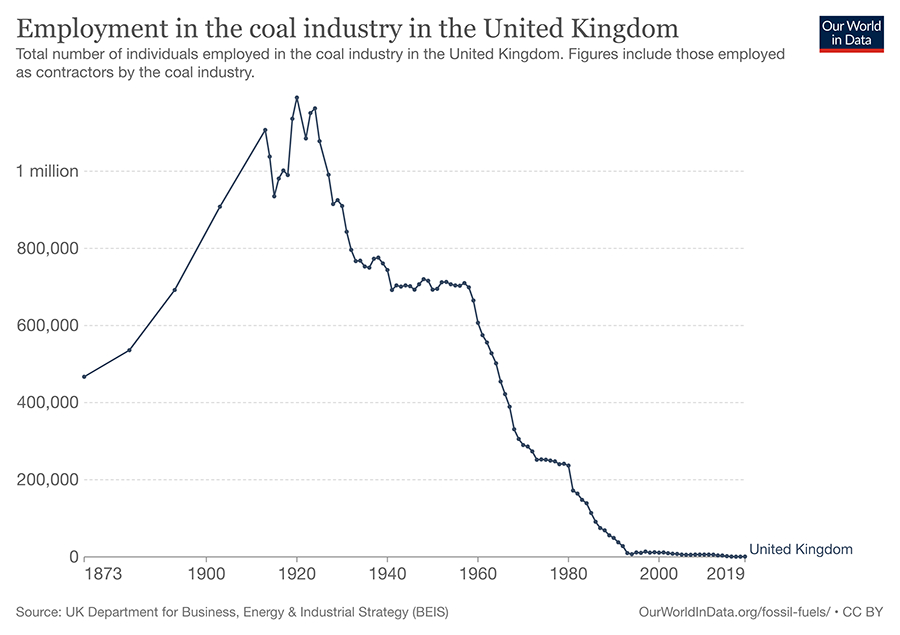 The number of people employed in the British coal industry declined from more than 1 million in 1920 (more than 5 percent of the workforce) to 700,000 in the late 1950s, to just 7,000 in 1994. By 2019, there were just 699 people employed in Britain’s coal industry. This precipitous drop resulted in significant challenges in areas that had been dependent on coal mining and power production. Forty years on, many former mining towns continue to suffer from this transition—facing a lack of investment and alternative employment, weak social inclusion, and the environmental legacies of closed mines. Many such communities feel abandoned and disenfranchised.

Which brings me back to Biden’s announcement and the lead-up to COP26. At DAI, we recognize that climate change is an economic and governance as well as an environmental challenge. But it is also a matter of justice and fairness. As development professionals, we must ensure that people remain central to the solutions we develop, and we must work with communities and vulnerable groups to ensure that their voices are not merely heard, but amplified.

The injection of additional U.S. finance provides welcome support for the transition to low-carbon economies in partner countries. But we must ensure that this transition is fair. The disjointed rollout of COVID-19 vaccines is a reminder that justice should be a critical element of the discussions in Glasgow.

Moreover, as recent history in the United Kingdom demonstrates, the energy transition is a long-term challenge. Done well, it presents huge opportunities, including highly skilled jobs in the manufacture and rollout of clean and renewable technology. Done badly, it risks creating a lost generation, especially among the poor and vulnerable who need our help the most.