Liberia is home to half of the remaining rainforest in West Africa. Covering more than 60 percent of the nation’s land surface, forests are the fourth-largest contributor to Liberia’s economy and an important source of income for one-third of its 4.5 million people. They also make Liberia one of the world’s hotspots for biological diversity, hosting more than 2,200 species of flora and nearly 900 fauna. However, the forests face pressing challenges due to illegal logging and other drivers of deforestation.

These are deep-seated problems. Timber played a significant role in funding the two civil wars that raged in the country between 1989 and 2003. Revenue from illegal exploitation of timber—alongside diamonds and rubber—fuelled the conflict and armed the combatant groups. In 2003, the United Nations Security Council imposed sanctions on Liberian timber export after the Government failed to prove that the revenues were “used for legitimate social, humanitarian, and development purposes.” The sanctions ultimately offered an opportunity for improved rule of law and were lifted three years later following ambitious reform efforts.

Nevertheless, forest governance in Liberia remains a challenge. Between 1990 and 2010, the country lost 12.2 percent of its forest cover, posing a threat not only to the communities depending on the forest for a living, but also to climate, wildlife, and biodiversity conservation. To tackle these challenges, the European Union (EU) and Liberia signed the Voluntary Partnership Agreement (VPA) in 2011.

In 2003, the EU set up the Forest Law Enforcement, Governance, and Trade (FLEGT) Action Plan to reduce illegal logging, improve forest management, and promote legal trade around the world. VPAs—essentially timber trade agreements between the EU and partner countries—are important parts of this plan. The EU-Liberia VPA of 2011 followed two years of negotiations among ministries and agencies, Liberian civil society organisations, community groups, and the private sector. It commits the Government of Liberia to develop and implement systems that ensure its timber exports to the EU come from legal sources. The VPA also commits Liberia to reform its governance to secure the long-term sustainability of Liberia’s forest sector while contributing to national economic development. DAI has been supporting implementation of the VPA since 2013, first through funds from the United Kingdom and since 2019 through EU funds.

“The ultimate aim of our technical assistance is to improve good governance in the forest sector so it can play a key role in the country’s sustainable socio-economic development, economic growth, and improvement of livelihoods by addressing the issue of illegal logging,” said John Leckie, DAI Global Practice Lead for Land Practice and Property Rights and Technical Director of the project. “By increasing the value of traded timber, strengthening law enforcement, and protecting the environment, our support deals with aspects that really matter to people.”

The current phase of the project, implemented with DFS Deutsche Forest-Service GmbH, is developing Liberia’s capacity to issue FLEGT licenses to help increase international trade with higher-paying markets such as the EU. Other important results to be achieved include completing the so-called legality matrix and extending the VPA to community and informal timber operations. 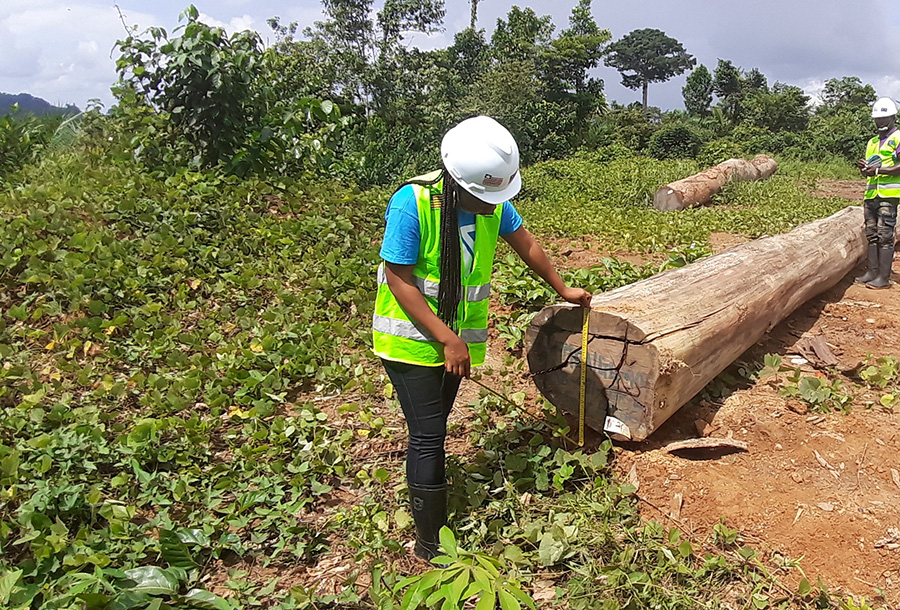 “The current phase has a major focus on building the capacity of key government counterparts such as the Liberian Forestry Development Authority, Ministry of Labour, and Environment Protection Agency to effectively implement the VPA,” said Michael Fischer, Team Leader of the project.

Through September 2020, the VPA project facilitated 22 training sessions to improve the capability of stakeholders such as contract administrators and regional foresters. The sessions have included mock inspections of forest harvesting practices and training in log scaling and verification, volume calculation, reporting, and chain of custody. Today, Liberian timber can be traced from the forest to the ship at harbor by assigning a unique barcode to every tree, log, and cross-cut, all of which is registered in a database called Libertrace before being exported. “The idea is that we should be able to trace the wood used for every single piece of—for example—IKEA furniture, to a specific tree stump in Liberia,” said Leckie.

Ensuring Regulations are Put in Place

Our team also supports the implementation of the “legality matrix,” a collection of 11 principles, 49 indicators, and 132 verifiers. These “checkboxes” help monitor and guarantee that the timber logging is in line with international best practices and that exports comply with legal requirements of the Government of Liberia. “The previous phase of the project made significant progress with developing compliance procedures for verification of these factors,” said Fischer. “Our job is now to ensure they are active.”

The verifiers encompass various regulations covering everything from logging techniques and fees to environmental impact and minimum wages for staff. Other requirements relate to the diameter cut limit, such as the minimum cutting diameter set for individual tree species before they can be harvested. To date, 46 out of the 132 verifiers are active. By next year, the hope is to have all of them put in place.

An important achievement of the second phase of the project is reviving the Forward Planner, which details the actions required to comply with indicators in the legality matrix and brings together key stakeholders to improve efficiency, coordination, monitoring and evaluation, prioritization, and equitable implementation.

Research shows that involving communities that depend on forests in the management of those forests is crucial to preventing illegal logging and deforestation. To encourage the communities to comply with national legislation, our team collaborates with Liberian nongovernmental organisations on workshops and trainings, creating a space where communities can contribute to implementation.

Two committees were set up upon signing the VPA: the high-level Joint Implementation Committee (JIC), which facilitates the monitoring and review of the agreement; and the Liberia Implementation Committee (LIC), which prepares for the meetings held by JIC. LIC consists of representatives from the private sector, government ministries and agencies, and civil society organisations to ensure proper stakeholder engagement. Among the groups represented is the NGO Coalition, created with the support of DAI during phase one to increase civil society representation. The coalition provides a structure for its members to take a joint strategic view and present proposals for funding and achieve economies of scale by working together, and for weaker members of the coalition to learn from stronger members.

One aspect of our work is raising awareness about the value of forests and the importance of forest management to local populations. This knowledge sharing is crucial because forest communities often invite commercial operators to extract timber from areas that used to be conservation forests. This extraction leads to rapid exploitation, where the communities sometimes don’t get the revenue share to which they are entitled. “We involve communities to make them aware of their rights,” said Leckie.

The current phase of FLEGT-VPA runs until April 2022. And although there is still some way to go before the VPA can be considered fully implemented, forest management is heading in the right direction. “We are working in a challenging setting but have seen progress,” said Leckie, “especially legislation-wise with the legality matrix.”

Perhaps most importantly, in a country where illegal logging is historically linked to war and violence, we hope that the groundwork laid by FLEGT-VPA will contribute to a more prosperous and peaceful future.