The rape kit–or forensic evidence collection kit, to use its sanitized title–is something people in the West might take for granted. Not so in Sri Lanka where, until the advent of the sexual assault forensic examination (SAFE) program, there were no readily available rape kits. Instead, perpetrators of sexual violence acted with impunity. 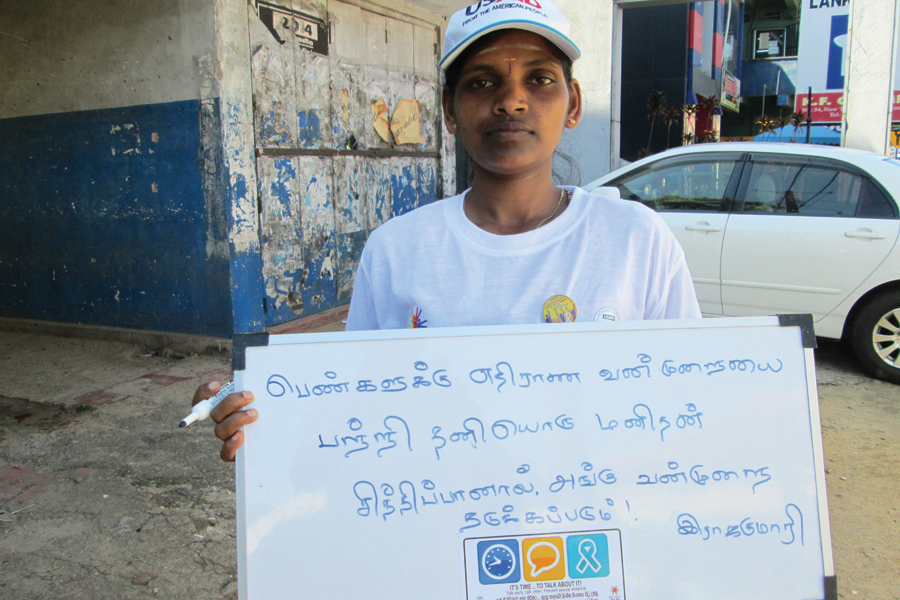 To turn this tide, the Reintegration and Stabilization in the East and North program (RISEN)—a DAI-implemented program funded by the U.S. Agency for International Development’s Office of Transition Initiatives—launched the SAFE initiative. Of course, the introduction of rape kits will not in itself solve Sri Lanka’s pervasive problem of violence against women and girls. But when combined with SAFE’s other work, the humble $20 kit can be the building block for an integrated campaign against sexual violence. That is the mission of SAFE, and it is already beginning to show results.

Among its activities, SAFE is:

In Sri Lanka, the psychological wounds left over from the sexual violence inflicted during the country’s 30-year civil war remain raw even now, four years after peace was proclaimed. During the civil and sectarian conflict, rape and other abuse were used quite unequivocally as a weapon, primarily by military forces against civilian women and children.

The desensitizing effects of systematic sexual violence have left many Sri Lankans inured and resigned to such abuse, and in turn left women and children susceptible to these crimes. The most vulnerable are internally displaced persons and returnees in the north and east. Among these groups, women and children constitute close to 80 percent of the displaced population, their male relatives either lost in combat or held in government-controlled detention centers.

The scarcity of data on sexual assaults also contributes to the prevalence of sexual violence on the island, where it is estimated that only 3 percent of cases are successfully prosecuted because of inadequate forensic evidence, improper handling of evidence, insufficiently trained medico-legal officers, inappropriate treatment of victims, and mishandling of cases once they go to court.

Many more cases go unreported because of a lack of confidence in the law and justice system and fear of social stigma. Attention to the issue dwindles in the absence of reliable incident data and visible prosecutions.

Through improved victim treatment, better collection of evidence, and stronger coordination between local authorities, SAFE is improving the judicial system’s response to sexually based crimes with the aim of reducing sexual violence.

“Most of the people who commit these offenses [do so] because they think they can get away with [it],” said Palitha Fernando, the Attorney General of Sri Lanka. “They think they can suppress the evidence. If they know they cannot get away with this, and the criminal justice system will ruthlessly pursue them, and they will be convicted and they will have to face the consequences, they will think twice before committing these offenses.”

Although it is only a year old, the SAFE program is already having an impact.

Previously, sexual assault victims were not asked for their consent before being examined; often, medical examiners would carry out their job even if the victims declined to be examined. SAFE worked with the government to include a victim consent section on the national medico-legal examination form. Women and children will no longer be re-victimized in the name of medicine or justice.

Through March, SAFE had trained 135 medico-legal officers and 1,075 government officers, judges, and lawyers; it had distributed 2,500 SAFE kits to 39 hospitals in all 25 of Sri Lanka’s districts. Stakeholders and prosecutors are now discussing sexual assault case management, and government officers recognize sexual assault incidents as serious and criminal offenses.

Communities now understand the importance of medico-legal care for sexual assault victims. And reports of assaults—now closely monitored by the Ministry of Health in a database developed by SAFE—are rising as a result of awareness campaigns and training.

The affordability of the $20 SAFE kit is crucial to sustaining the program after RISEN’s funding comes to an end. Other indications of long-term sustainability are equally promising: the Ministry of Health has adopted the SAFE kit and added funding to its annual budget accordingly; coverage in the north and east has jumped from one medico-legal officer for all cases to 22 medico-legal officers, all trained through SAFE; participants are turning out for their medico-legal examination training at a rate of 85 percent; and young people are getting involved in youth awareness campaigns.

Thanks to SAFE, sexual violence is no longer being taken for granted in Sri Lanka.