The Philippines is one of only two countries in Southeast Asia to be behind in their commitments to eliminating open defecation and achieving universal access to basic sanitation by 2030, according to the UNICEF-World Health Organization Joint Monitoring Programme. It is estimated that 16 percent of the population has access only to unsanitary and shared toilets, and more than 4 million Filipinos have no access at all in 2020.

Improved sanitation reduces the spread and impact of deadly diseases as well as addresses childhood malnutrition, which can have life-long mental and physical impacts. It also promotes dignity and ensures safety, particularly for women and girls, and improves school attendance. Studies show that the economic return for sanitation improvement is considerable: $5.50 for every $1 invested.

One of the largest barriers to addressing this problem is the upfront cost of the toilet facility itself, averaging $600 to 800—almost a third of what a low-income Filipino household earns in a year. While there is demand for toilets, poor households are often unable to overcome this financial hurdle. Many of these households could afford to build a toilet if they could borrow and spread the cost over time, but banks won’t lend to them.

To help the Philippine government close this financing gap, the U.S. Agency for International Development (USAID)-funded Safe Water activity piloted a hybrid financing model—a mix of blended finance and targeted sanitation subsidies aimed at the poorest households. Output-based aid serves as a guarantee to service providers, in this case, the microfinance institutions, to advance the subsidies which are paid based on verification of pre-agreed project outputs, giving them an incentive to complete early and comply with the standards to get reimbursed for the advances. This method helps make toilets more affordable for poor households and creates the right incentives for microfinance institutions to provide services to customers with the greatest needs. The pilot was implemented in the Municipality of Alabel and Sagay City, in collaboration with Water.org and two microfinance institutions—ASA Philippines Foundation, Inc. and the Negros Women for Tomorrow Foundation—from July to November 2021. 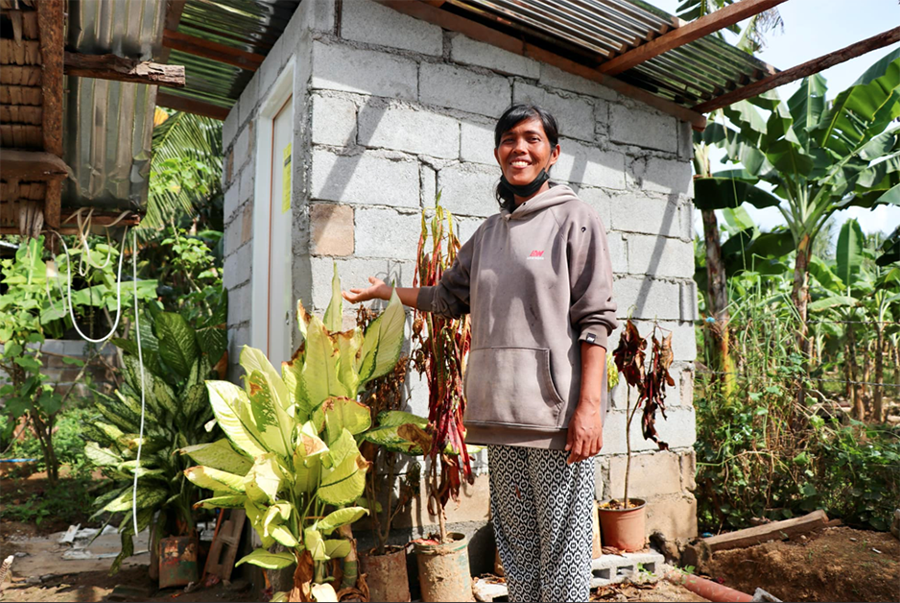 DAI provided $30,000 in sanitation subsidies as a guarantee to the microfinance partners for them to cover, on average, two-thirds of toilet construction costs (the output-based aid component) for each qualified household. The remaining cost of the toilet was then financed by the households, which applied for financing from the partner lender to pay this cost (blended finance component).

Once loan agreements were finalized, the institutions hired certified masons or construction firms and provided the upfront finance to build the toilets. Upon certification by a trained independent verifier that the toilet met the Philippine Sanitation Code, the lender was then reimbursed for the output-based aid subsidy (two-thirds of the cost of toilet construction). The remaining cost of toilet construction not covered by the subsidy was then amortized as a loan from the partner lender by the household. Household loan rates and repayment periods were adjusted to account for the household’s economic status. For the replication of the scheme, local governments will provide the output-based aid.

To lay the groundwork for this pilot financing method, Safe Water had to:

We selected eligible communities based on their poverty incidence (targeting the bottom 50 percent of the poor population, those with monthly incomes less than $200), access to sanitation (the proportion of households with unimproved access and practicing open defecation), and prevalence of waterborne diseases.

What Changes Did We See?

The hybrid scheme proved effective in generating demand for and investments in household sanitation facilities. Among the results:

Leveraged resources to support demand generation. The grants stimulated the mobilization of resources to provide affordable sanitation facilities. The blending of resources enabled the local governments and lenders to use limited resources to reach more poor households. DAI’s $30,000 grant was leveraged 1.5 times by public, private, and household contributions.

Increased efficiency in delivery of sanitation services. The pilot was more efficient than the traditional local government subsidy program, which distributes toilet bowls and some construction materials. The usual in-kind subsidy for sanitation—comprising a toilet bowl, sand, and cement—averages $340 per household, or half of the investment cost of a sanitary toilet compliant with standards. Most often, the toilet bowls and construction materials are not used, due to a lack of counterpart financing to put up the corresponding structures. Indeed, on average, only 8 percent of beneficiary households complete construction of their toilets. By contrast, our method ensures that grants are used properly, according to standards, and are only disbursed when the outputs have been delivered and verified. Engaging lenders in the process also contributes to efficiency: as the bridge financier, they have an incentive to complete construction early and in compliance with standards, if they are to get reimbursed for the advanced funds.

Expanded customer base for lenders. The microfinance institutions garnered new clients and new loans which have helped them after economic hardships brought about by the COVID-19 pandemic. At the same time, new borrowers were integrated into the financial system and established credit history for non-entrepreneurial loans. The microfinance institutions lent a total of $15,000 to the 100 household beneficiaries, roughly 60 percent of them first-time borrowers. 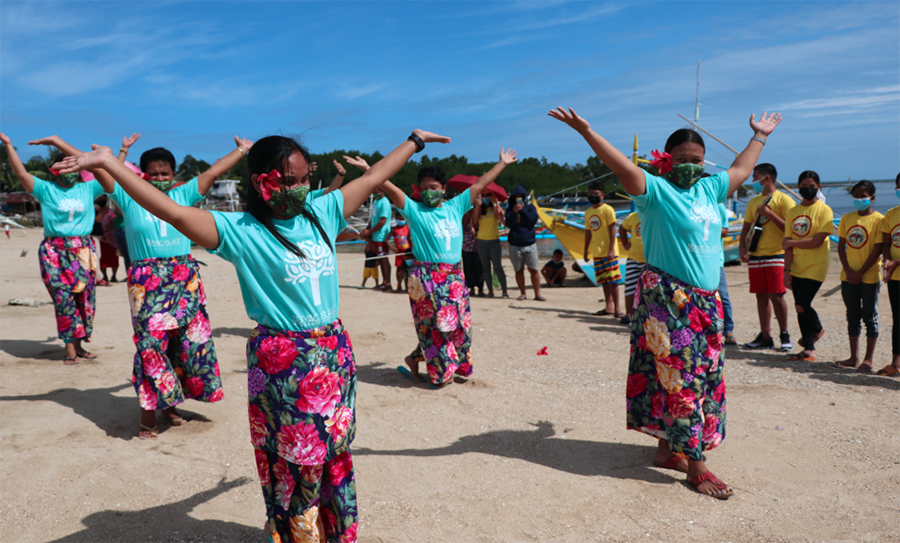 What Have We Learned?

Poor households were eager to take on loans for a partially subsidized sanitary toilet. Many households indicated an interest in participating but the program was constrained by the amount of subsidy funds available and the policy of a partner lender to lend only to existing members. Some 265 low-income households were identified as eligible, of which 137 participated.

Moreover, while our pilot’s overhead costs were in excess of the Philippines local government’s subsidy program, the overhead costs were minimal. For instance, one USAID study in Ghana found that the operational costs of Ghana’s subsidy program were equal to, if not more than, the subsidy amount itself. Conversely, the blended finance pilot program carried a much smaller operational or overhead cost consisting of about 10 percent of the program’s overall cost—demonstrating the value for money. 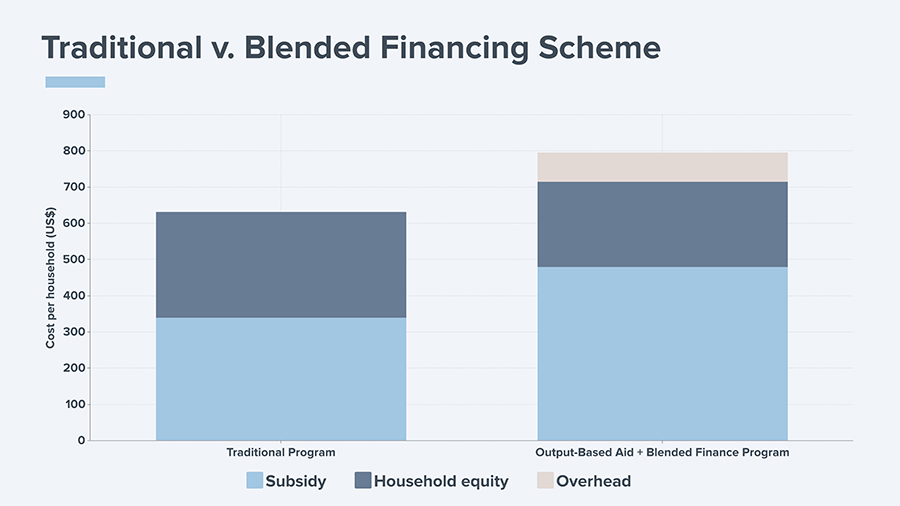 Safe Water has developed information, education, and awareness-raising materials to make the case for expanded investment in finance as a means to improve access to sanitation, targeting policy and decision-makers, lenders, and local communities themselves. The pilot has shown that communities understand the links between water, sanitation, hygiene, and health, and they are willing to pay for better sanitation—given the chance.

Alma Porciuncula is Chief of Party and Doreen Erfe is the Resources Mobilization Specialist for the Philippines Safe Water Activity. Kate Edelen is a Senior Project Manager in DAI’s Asia region.