Resilience has been defined as the ability to mitigate, adapt, absorb, and recover from hazards, shocks, and stresses in a manner that reduces chronic vulnerabilities. Vulnerability is a good starting point for any analysis of resilience; understanding chronic vulnerability can inform development programming to enhance resilience in various areas, whether in health, economic growth, climate change, or HIV mitigation.

In this article, focused on HIV-affected populations, we discuss our experience in Tanzania implementing a program called IMARISHA—Improving the Multi-Sectoral AIDS Response to Incorporate Economic Strengthening for Households Affected by AIDS—to illustrate the opportunities, challenges, and questions surrounding an integrated approach to household resilience that brings together clinical and livelihoods dimensions.

The Divergence Of Perspectives

The relationship between HIV/AIDS and livelihoods insecurity is bidirectional: HIV/AIDS can make people’s livelihoods more vulnerable, while those with vulnerable livelihoods can contribute to HIV transmission by engaging in higher-risk behaviors — such as intergenerational or transactional sex, moving to a new community for economic opportunity and acquiring additional sexual partners, and sex work — to meet their basic needs. Vulnerability and insecurity can also diminish the ability of households to access services, thereby exacerbating HIV morbidity and mortality.

Understanding The Scale Of The Challenge: Tanzania

HIV morbidity often affects people in the prime of their lives. HIV-affected households can face reduced income as productive adults become sick or need to take care of others who are ailing. These challenges have serious long-term consequences for the economy, particularly the agriculture, education, and health sectors.

HIV remains one of the most pressing health issues in Tanzania. The Tanzania HIV/AIDS and Malaria Indicator Survey documents these challenges:

While the realities of living with HIV are bleak, advances in access to antiretroviral treatment are promising. As of June 2012, approximately 60 percent of Tanzanians living with AIDS were on antiretrovirals2.

Understanding how to keep patients in care and treatment is one of the critical aims of the Ministry of Health, the Global Fund, and the U.S. President’s Emergency Plan for AIDS Relief (PEPFAR). Many HIV service providers focus on clinical vulnerabilities, helping people living with HIV to limit the shocks of the progression of illness and stay in treatment with appropriate care and support services. Figure 1, developed by Pathfinder International, illustrates this notion of progression, where clients who stay on track, enroll in treatment, and remain in treatment achieve viral suppression. Deviations from the path lead to continued HIV transmission, poor health, and even death. 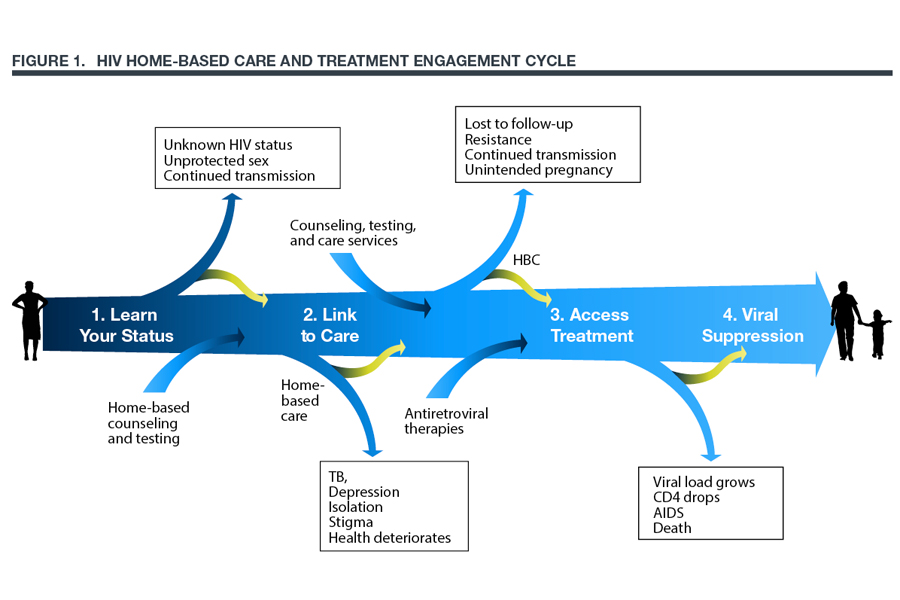 Livelihoods programming is a potentially critical tool to complement health and other social services to address HIV. PEPFAR, in particular, supports community-based programs to improve HIV-affected households’ economic position. Activities designed to build such economic resilience include promoting savings and money management, improving business and agricultural practices, and linking households to social protection and market opportunities. These efforts complement other health and social welfare offerings that seek to help people stay within the care of support services while empowering them to manage their HIV with dignity.

In Tanzania, IMARISHA—a two-year-old program funded by the U.S. Agency for International Development (USAID) and PEPFAR—works to improve the effectiveness of economic-strengthening activities, targeting HIV-affected households through technical assistance and support for home-based care, orphans and vulnerable children, and clinical partners. IMARISHA works closely with key government stakeholders, including the Ministry of Health’s Department of Social Welfare and the Tanzania Commission for AIDS. The analytical rationale for integrating livelihoods support at the household level with HIV/AIDS prevention, treatment, and care programming is rooted in the notion that reducing households’ economic vulnerability and food insecurity maximizes overall resilience and ability to address HIV3.

IMARISHA’s aim is to work with partners such as international and local nongovernmental and community-based organizations to build economic resilience through programming that empowers HIV/AIDS-affected households to save money, build assets, improve food security, and diversify income. Addressing each of these objectives contributes to resilience. One of IMARISHA’s priorities has been to work directly with partners and HIV-affected households and communities to understand exactly how they experience vulnerability.

In 2011, IMARISHA adapted Save The Children-UK’s Household Economic Assessment survey as a tool to better understand the economic vulnerability and resilience of HIV-affected households in eight regions of Tanzania. If we could identify the drivers of vulnerability, we reasoned, perhaps we could develop, fine-tune, and implement programming to build longer-term resilience among those households.

IMARISHA used food security as a lens to understand the range of household experience, which extends from acute vulnerability to fairly robust resilience in the face of economic shocks. Figure 2 illustrates the vulnerability spectrum IMARISHA identified among HIV-affected households. The severity of vulnerability is determined by the level of food insecurity, the household size, the number of income earners, the number and value of assets, and the positiveness of the household’s economic outlook. The most vulnerable households are unable to access critical clinical services, are larger in size (more people), have few to no assets and little to no income, and suffer household hunger (using the Household Hunger Scale, a validated measurement developed by the USAID/FANTA2 project).

At the other end of the spectrum, households characterized as least vulnerable had two or more assets, more income stability, access to critical services, and little-to-no household hunger. Interestingly, they were also distinguished by positive perceptions about the degree of control over their future and by optimistic views of their household’s and community’s food and economic situations.

IMARISHA has shared the results of the survey, as well as our proposed tailored indices for monitoring vulnerability and resilience, with our partners to assist them in improving programming and to spur dialogue around the challenges facing HIV-affected households. Our partners, in turn, have adapted their programming with vulnerable households to move away from basic hand-outs, which can promote dependency, in favor of activities such as informal savings groups, improved horticulture and livestock management practices, and better business behaviors.

Coming Together: Clinical And Livelihoods Perspectives

IMARISHA’s resilience programming continues to evolve. In early 2013, in discussions with our PEFPAR HIV treatment partners about encouraging people to stay in HIV care, IMARISHA proposed that service providers expand their vision of clients’ lives beyond clinic boundaries. In Tanzania, one of the critical challenges for treatment efforts is the fact that many HIV patients—28 percent of them, according to 2012 data from PEPFAR—do not commit to follow-up appointments and ongoing care. The phenomenon is attributed to social and cultural norms, the stigma attached to the disease, the quality of care, and poverty, which constrains people’s ability to pay for transportation to the doctor and for medicine. 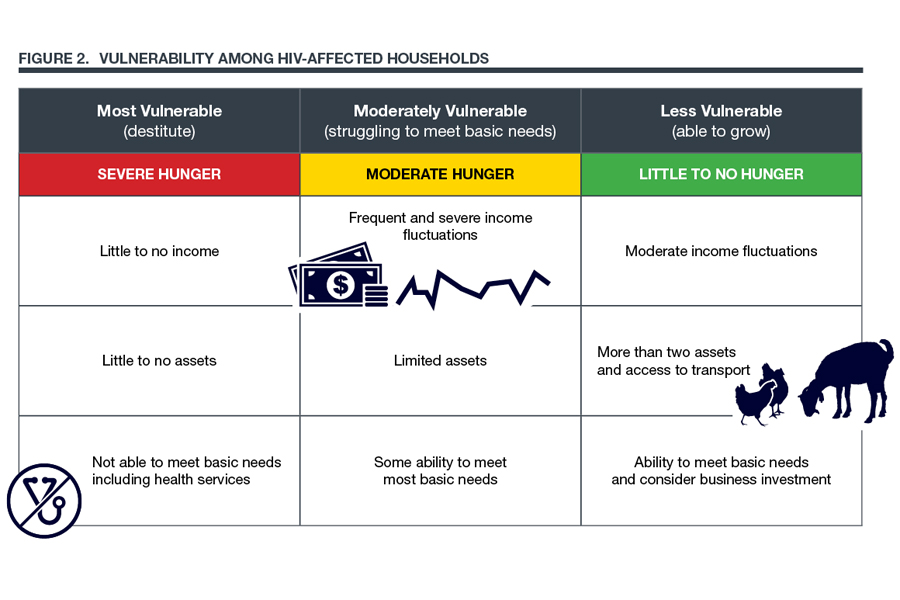 IMARISHA proposed considering and responding not just to the clinical vulnerabilities of HIV-affected clients, but also to their economic realities, including positive and adverse economic events—birth, marriage, death, crop failure, family and community obligations—to ensure that people continue to get services. IMARISHA and two PEPFAR home-based care programs—the Caya Community Care Program, managed by Africare, and Tutunzane II, managed by Pathfinder International—began work on a tool to help home-based care providers and clinic nurses identify clients at risk from defaulting from the continuum of care.

Incorporating both livelihoods and clinical perspectives, the tool seeks to measure the risk of dropout across various factors—demographic, health, social, and economic—and the response is aimed at improving resilience from a broad perspective covering both livelihoods and clinical outcomes. Our working hypothesis is that if clinics and home-care providers can identify the risks, they are better placed to build programs that combine economic strengthening, psychosocial support, and social engagement to keep people coming to the clinic and living longer.

Health And Livelihoods: More Than The Sum Of Their Parts?

Based on our experience exploring the health and livelihoods dynamic on IMARISHA and elsewhere, it seems increasingly likely that resilience is related not only to improving household economics and clinical adherence, but also to social inclusion and cohesion. While saving, money management, and income-generating activities are all important behavioral drivers of income growth for a family, social and group participation—activities often associated with economic programming—may be just as important in decreasing stigma, reducing isolation, and contributing to resilience. Behavioral economists such as Esther Duflo have drawn similar conclusions from other successful programs where the outcomes of the program exceed the inputs in ways greater than anticipated. Last year in The Economist, Duflo suggested that economic strengthening that improves social cohesion and reduces isolation can give people the mental space to think about their future in terms that envisage more than just scraping by to their next meal4.

We do not yet have a comprehensive solution to address the unique vulnerabilities of HIV-affected households. Our programming — informed by vibrant dialogue with our partners in Tanzania — remains a work in progress. But we hope that by building the knowledge base underlying an integrated approach to resilience and vulnerability — an approach combining clinical, livelihoods, and social inclusion strategies—we will be able to provide valuable guidance to policy makers and practitioners in the field.