When the villagers of Makhoyo in southern Malawi were introduced to the concept of backyard gardens, few of them gave it much thought. Residents had farmed soy and groundnuts for generations in this area. It seemed too simple to be true: to grow vegetables easily at home, especially during the dry offseason.

But given their chronic under-nutrition, the community agreed it was an important idea to consider, and some gave it the benefit of the doubt. That was three years ago. Today, many are embarrassed to have doubted backyard gardening at all. 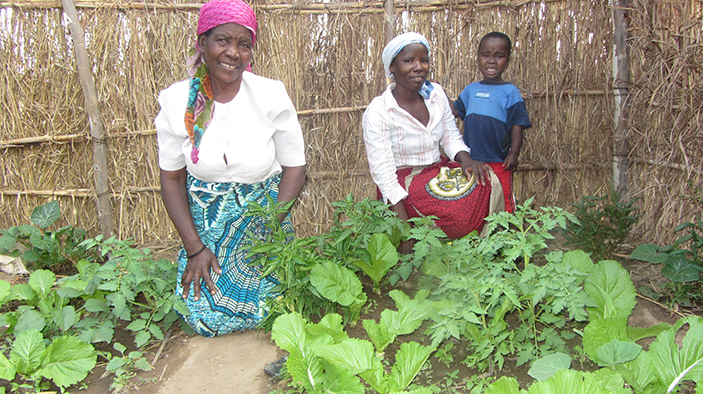 Almost 150 households in Makhoyo and surrounding villages have since established backyard gardens—setting aside a piece of land, tilling it, applying chicken manure, and growing highly nutritive local vegetables such as khwanya (bean leaves) and bonongwe (amarathe). These gardens proved to be the first of many.

Led by Feed the Future—Malawi Integrating Nutrition in Value Chains (FtF-INVC), a U.S. Agency for International Development project implemented by DAI, up to 10,000 households in each of five districts where FtF-INVC operates are on track to establish backyard gardens. This represents 30 percent of the households already benefitting through the project’s other initiatives.

“If we reach 30 percent of our total beneficiaries with backyard gardens, that is pretty significant,” said Ben Lentz, Chief of Party of FtF-INVC, which, among other activities, promotes competitiveness and innovation in agriculture value chains, improves productivity through soil and water management, and trains local groups on climate change resilience.

“The gardens have become a great innovation here,” said 36-year-old Patuma Mjatu of Makhoyo, who, as a “lead mother,” volunteers as a health and nutrition educator for 12 local households that she visits regularly.

“Vegetables are no longer a problem,” she said. “The trend has changed and every woman has a small garden she can turn to. Because of their cost-effectiveness, men in this village are now the ones in the forefront helping set up gardens for their wives.” 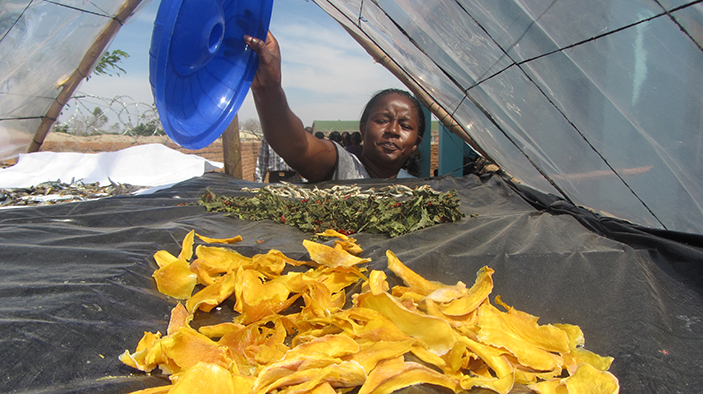 The four-year FtF-INVC project operates in the southern districts of Machinga (where Makhoyo is located), Mangochi, and Balaka; the central districts of Dedza, Mchinji, and Ntcheu; and the capital of Lilongwe. The gardens were introduced in areas with high cases of stunting among children under age 5. An estimated 20 percent of all child mortality in Malawi is associated with under-nutrition, with stunted children more likely to drop out of school or need to repeat grades.

Other research estimates that more than 10 percent of those in Malawi who would now be between 15 and 64 years of age died as children because of undernourishment.

INVC Nutrition Assistant Carol Zgambo visits participating households to encourage them and make sure they eat the vegetables first before selling the surplus. Historically, many smallholder farmers have sold their produce, depriving their families of important nutrients such as Vitamin C, which supports the immune system, and Vitamin A, which supports eyesight and breastfeeding. Since the gardens feature low-maintenance local crops, tending them is manageable for pregnant women, breastfeeding mothers, and households with young children.

As in many African countries, women in Malawi contribute more to agricultural productivity than their male counterparts and yet have to also scavenge for their families’ food. This depletes them nutritionally as they balance daily chores and other obligations. If each household adopted the backyard garden technique, micronutrient deficiencies from inadequate consumption of vegetables could be greatly reduced, according to FtF-INVC Nutrition Specialist Catherine Chiphazi.

“Children are the most vulnerable but if you have vegetables even at small scale, you can use them as complementary food for them by mashing the leaves and adding them to their porridge,” Chiphazi said.

The group village head, also named Makhoyo, a traditional leader, is overjoyed that her subjects are applying backyard garden technology and boosting the nutrition levels of their families, and is setting up her own garden to inspire those women yet to embrace the concept.

“It has eased the pressure on women,” Makhoyo said. “They do not have to walk long distances to their family riverside gardens. They just disappear behind their kitchen and soon emerge with a bundle of green leaves in their hands—enough for a family. This has also ensured that vegetables are readily available during every meal.”

Makhoyo also noted that residents are not asked to grow strange, leafy vegetables whose seeds have to be purchased from the supermarket. Instead, they grow indigenous vegetables commonly found in their local communities.

Mjatu’s husband built the grass fence protecting her vegetable plants from goats and chickens in appreciation of the value they bring to their home. Well-watered and looking green, the garden boasts a beautiful crop of mpiru (mustard greens), bonongwe (amaranthus), and khwani (pumpkin leaves). Three times a week, Mjatu strolls to her garden and picks enough vegetables for the family. Together they enjoy their meal at no cost while saving the family MWK500 (US$1) every week.

“We grow vegetables close to our homes where they are easily accessible,” she said. “In doing so, we have eased our families’ budgets and we are healthier. In fact, I can’t remember when I last visited the hospital.”