Climate change is leading to higher average temperatures and greater rainfall variability, with a pronounced effect on agricultural productivity and the suitability of major crops in Ethiopia. Farming households with tenure security are more likely to choose to access credit and to invest in their land by planting trees and longer-term crops, and by reducing soil erosion—for example, via terracing. Such investments can help farmers mitigate risks related to heavy precipitation, such as soil run-off or crop failure. In addition to sequestering carbon, trees, through shade and moisture retention, help to increase land resilience to heat stress.

The Land Investment for Transformation (LIFT) programme has supported the Government of Ethiopia in providing land certificates to rural landholders. Recent evidence from LIFT highlights the importance of tenure security to incentivise smallholders to adapt to the climate risks they face, with lessons and recommendations for the design of future land and climate programmes.

Seventy percent of global, ice-free land is under productive use to support livelihoods and well-being. Land use is also a source of the three major greenhouse gases: methane, nitrous oxide, and carbon dioxide.

Land suffers the effects of climate change in various ways, from flooding to crop suitability, and the Horn of Africa is no exception. Since 1950, Ethiopia’s temperature has risen by an estimated 0.37°C per decade, with rainfall decreasing by 15–20 percent across southern parts of the country from the mid-1970s to the late 2000s.

Smallholder farmers are at the front line of climate change. Their decisions—on issues from land-use intensification to reforestation—will be critical to the success of Ethiopia’s climate adaptation and mitigation strategies. They must also achieve food security without degrading their land.

To increase tenure security and spur farmers to invest in their land, LIFT, funded by UK aid, supported the roll-out and provision of second-level land certificates (SLLC) to rural landholders. From 2014 to 2021, the programme provided 14.3 million SLLCs in 175 districts across the Amhara, Oromia, SNNP, and Tigray regions of Ethiopia. LIFT also worked to make the rural land administration system more sustainable and supported interventions in credit access, formal land rental, and input markets.

Commissioned by LIFT, recent research into the success of this approach used a survey that combined quantitative data collection with qualitative interviews. The study builds on a large body of research on certification, tenure security, and investment, and most recently a study finding a 13 percentage point increase in land investment among those who had received SLLCs, compared to those who had not.

LIFT’s research sampled 669 households that had received SLLCs between 2015 and 2018. A large majority expressed increased confidence in tenure security and perceived reductions in land-related disputes. One-third reported feeling more motivated to invest, and 20 percent reported actually increasing their investment due to the possession of the SLLC. There was variability in these findings across groups, with poorer, older, and widow-headed households less willing or able to invest, despite holding the SLLC. 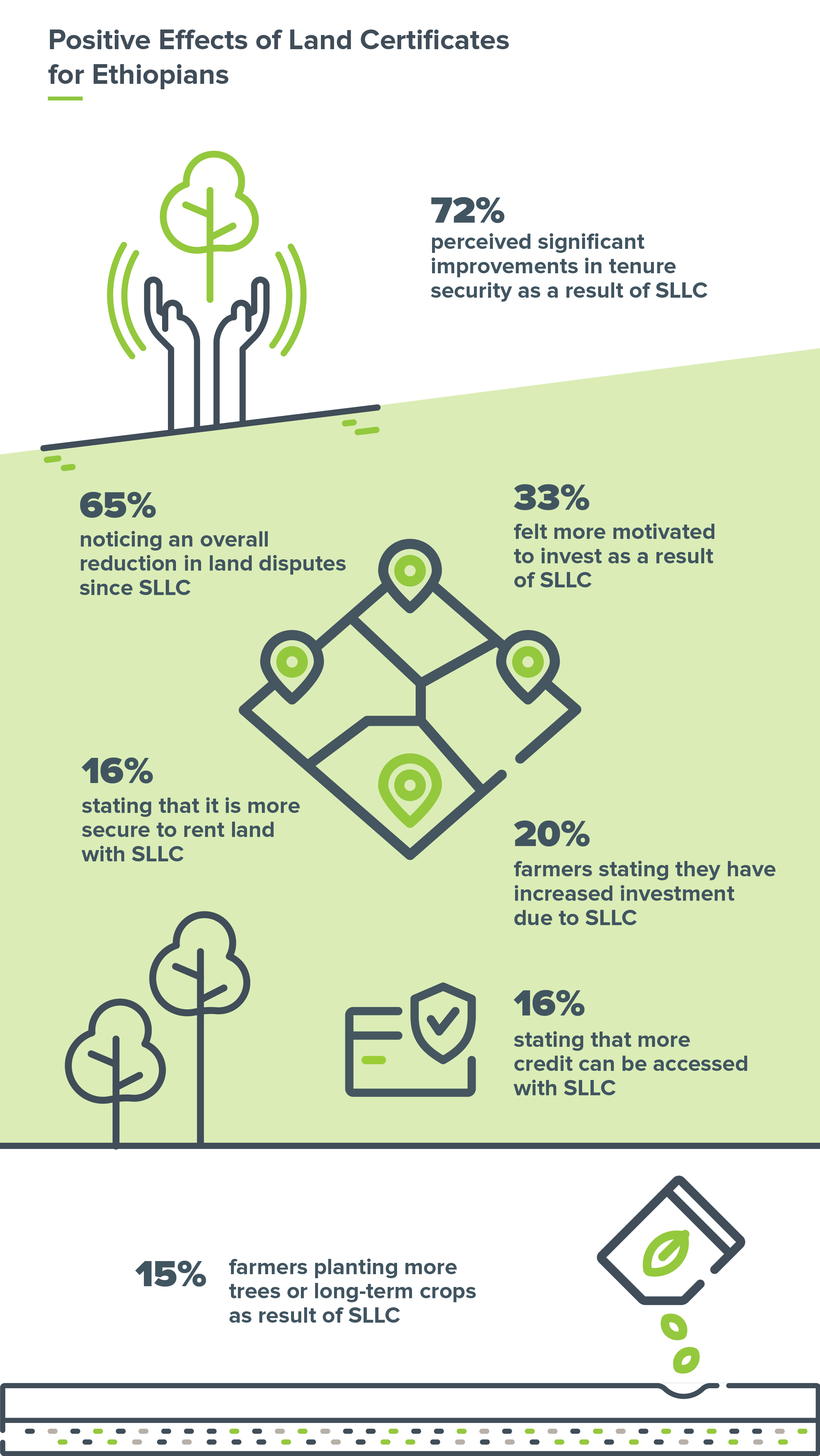 The survey fieldwork took place in early 2021, at a time of increasing insecurity in the country and challenges posed by COVID-19, including price rises. Yet respondents’ biggest concern was the weather. Across regions, respondents cited a mix of low overall rainfall and heavy rain events, plus hail, snow, unseasonal frost, scorch, and related pest and crop diseases. Comparable data show very high average temperatures in the growing period from November 2020 to January 2021: 2-3°C above averages for the previous decade. This temperature spike is above climate projections and follows a major drought in 2015, which is also linked to climate change.

The survey included questions on production for the 2020/2021 Meher (main growing) season. Two-thirds of the sample (68 percent) saw declines in production, a majority citing bad weather as the cause. Many faced a difficult year, including reduced calorific intake, and some estimated yield declines of up to 75 percent for staple crops. Households with diversified income sources had some protection—around 12 percent of households saw income remaining stable or increasing even as production was falling, thanks mainly to remittances, rising sale prices for crops, labour income, or income from small business activities such as livestock sales.

Despite the challenging year, farmers continued to invest. Three-quarters reported using inputs, and a third said they have used more inputs over the past three years, including fertiliser, pesticide, and improved seeds. Longer-term investments were made by 83 percent of households over the past three years, with terracing, ripping (deep tillage), and tree planting the most common.

Respondents were more likely to cite longer-term investments as motivated by SLLC possession and tenure security, the most common being trees or longer-term crops (15 percent of respondents). Shorter-term investments were less likely to be linked to SLLC, with only a handful of those surveyed doing so. Timelapse imagery shows tree planting and other investments increasingly evident for some parcels covered in the survey; the image below shows land before and after SLLC roll-out. 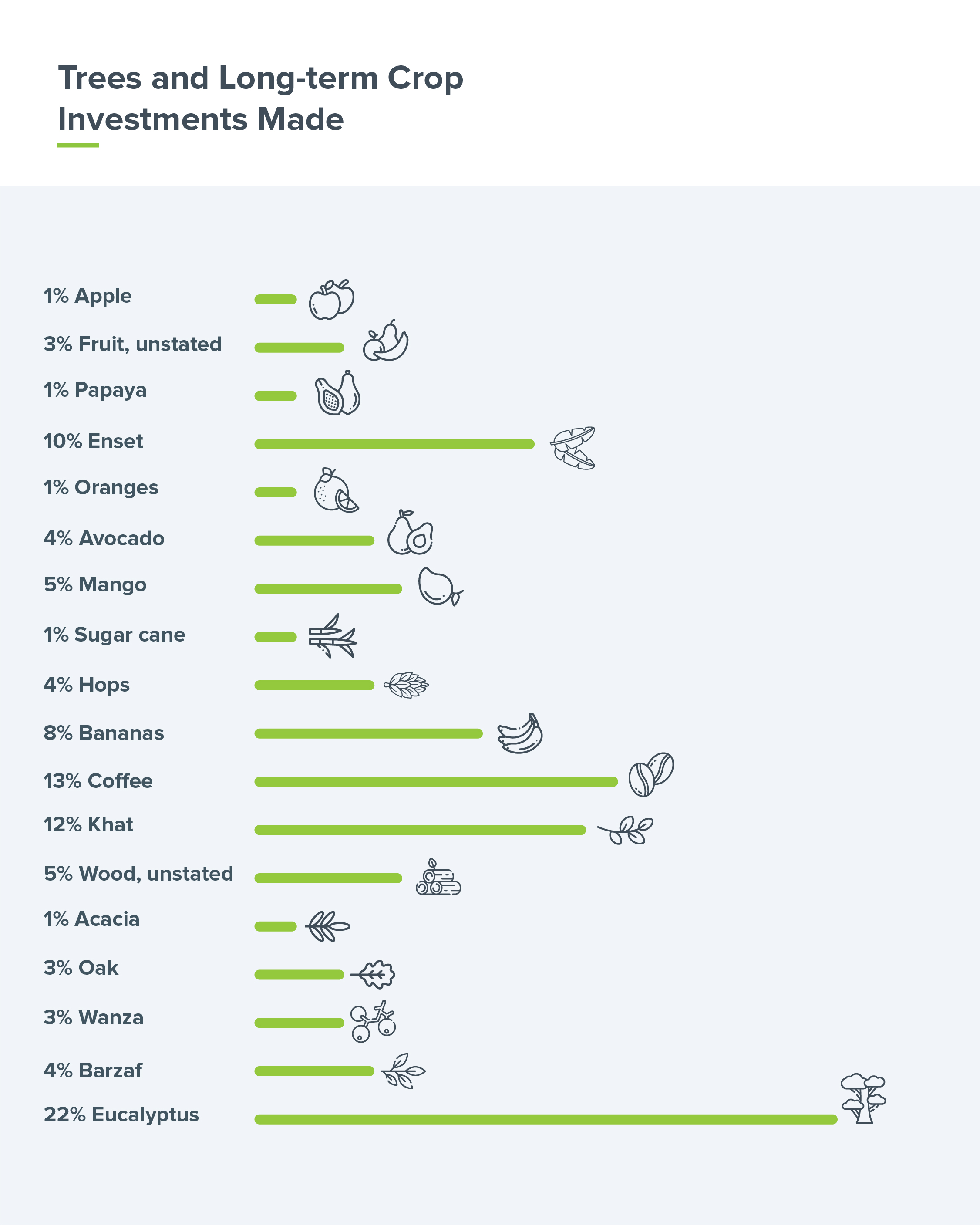 Tree planting is not without challenges, however. Those planted for fuel and charcoal need careful management to have a positive impact. In addition, some farmers were reluctant to plant trees due to effects on neighbouring farms, and some species (such as eucalyptus) can lead to fertility depletion and water deficit, or suppress vegetation.

While tenure security can motivate farmers to make longer-term investments, these individual investments may need to be complemented with communal works to optimise climate adaptation, which may entail support from extension workers and communal investments such as ripping and terracing.

1. Mobilising investment is an increasingly important aspect of land tenure programmes but needs to be made climate-smart. Land programmes need to help ensure that investments are appropriate, particularly in terms of climate change adaptation over the medium- and long-term, both in programme design and implementation.

2. Tenure security incentivises tree planting but the type of tree matters. Investment in some tree species has a clear role in adaptation and mitigation, but some species can have adverse effects on soil fertility, water resources, and neighbouring farms, and may represent a fire risk. The impact on climate can also depend on the trees’ end-use products. Land programmes must understand the risks and promote research and dissemination of knowledge on the impacts of different tree species.

3. A wider market systems approach is essential to promote successful climate adaptation and mitigation. Household strategies, including decisions to invest, are influenced by extension services and neighbouring farmers. Crop choices are also highly locally correlated. Land programmes should engage with markets and extension services to balance food security and sustainable land management objectives. This includes support to the adoption of specific crops, particularly in drought-prone areas, as well as promoting alternative sources of income to enhance farmers’ resilience.

1. Tenure security is essential to climate change adaptation. Top-down planning may work for larger-scale investments, but it is insufficient to bring about change that depends on the individual choices of numerous households. Influencing those choices requires a systematic approach that calls on climate programmes to model how individuals and communities are incentivised to make long-term changes. Our research suggests tenure security is a key factor underpinning decision making.

2. A balance is needed between communal and individual action. Climate programmes need to support communal work and investment, and also to harness the knowledge of farmers and their incentives to invest. Farmer knowledge is critical where highly localised solutions are required—for example, in adjusting to soil type, tackling erosion, and investing in irrigation and drainage.

3. More vulnerable households to adapt. Poorer households, female-headed households, and older people may be less able to adapt. Climate programmes need to understand these challenges and help more vulnerable groups to enhance their tenure security. This can include, for example, greater engagement with rental market formalisation so that households can confidently and securely rent out their land and engage in more diverse on and off-farm income-generating activities, enabling more climate-resilient households.

Joseph Holden is an independent consultant who carried out an impact assessment of LIFT. Article contributors include: Felicity Buckle, Senior Consultant in the Resilience Practice; John Leckie, Principal Global Practice Lead for Land; and Donald Lunan, Global Director for Climate.