Imagine if you could pay taxes only by traveling to the capital and paying in person—or, by paying in cash at a tax office to a “middleman.” Until recently, this is how taxes were paid in Liberia. Additionally, due to failures by the internet, power supply, or information technology systems, taxpayers often required four trips on average to tax offices to fulfill their obligations. Even basic transactions such as paying for a birth certificate required making a trip to the capital, Monrovia. As a result, many citizens and businesses simply did not comply, depriving the government of revenues needed for services as well as of valuable data.

But there is good news on this front. Liberians’ ability to pay taxes and fees has improved dramatically thanks to assistance from the U.S. Agency for International Development (USAID). In March, Liberia President George Weah officially launched the country’s mobile payment system, developed with assistance from USAID’s Revenue Generation for Governance and Growth (RG3) team. Today, citizens and business owners can readily pay taxes and fees by using mobile payments and the recently developed payment options at select bank branches. This means they no longer need travel to Monrovia and stand in line at one of the two windows designated for this purpose.

Liberians can now pay most taxes using their mobile phones, including corporate income, personal income, real estate, business, excise, goods and services, and withholding. They can also pay most of their fees, including for birth certificates, marriage certificates, travel clearances, fire safety certificates, and business registration renewals. In a small, poor country such as Liberia, these additional revenues can help finance schools, hospitals, important infrastructure, and other needs while reducing its dependency on donors. Based on results from similar USAID e-pay programs in the Philippines, El Salvador, and elsewhere, the Government of Liberia can conservatively expect to generate .5 percent more revenue as a percentage of gross domestic product, or approximately $20 million each year.

“Our roads can be paved, but we must pay our taxes so we can develop our country,” Weah said at an April ceremony at Monrovia City Hall, where Weah used his phone to demonstrate paying his own real estate taxes. “We do not chase people to pay taxes; we [create] mechanisms for collection so it is easier.” Weah encouraged citizens to use the mobile-payment option to help finance his administration’s pro-poor development agenda.

“We are happy that through the [Liberia Revenue Authority] our government is making use of information and communication technology to promote good governance and clean governance. E-government helps improve efficiency, improve services … it helps to build trust between government and its citizens. It enhances transparency and accountability.” —Liberia President George Weah 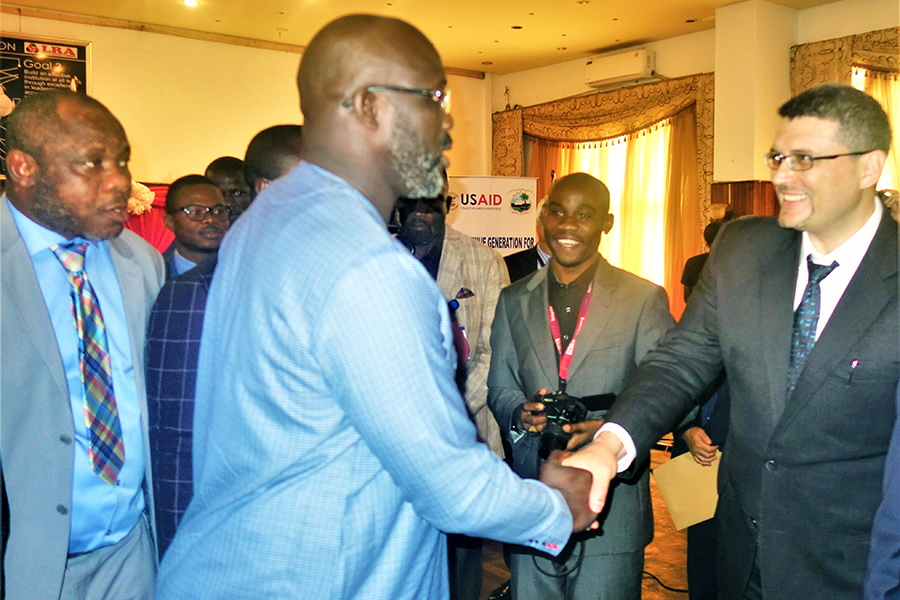 Since launching in 2016, RG3 has assisted the Liberia Revenue Authority (LRA) to enable payment of taxes through nine commercial bank branches, greatly increasing taxpayers’ options. Today, up to 50 percent of the country’s taxes are paid this way, most often with a click of a button through the banks’ online portals. But this solution only helped taxpayers who lived near one of these locations.

To establish the mobile option, the LRA and RG3 teams identified two phone companies—Orange Telecom and Lonestar Telecom—to compete to become Liberia’s first pay-by-mobile services provider. The telecoms chose the United Bank of Africa for partnering due to the bank’s technical agility and aspirations. Together with the LRA, the telecoms and the bank began developing the mobile platform.

RG3 helped design the electronic architecture; develop payment, reporting, and reconciliation procedures; build ongoing consensus to move forward; and draft the pilot agreement between the LRA, Orange Telecom, Lonestar Telecom, and United Bank for Africa. Orange Telecom won the race to become the first telecom to launch mobile tax payments; Lonestar Telecom recently launched its service. LRA and RG3 are now working together to support back-end reconciliation, such as the synchronized confirmation and recording of payments between the telecoms, bank, and LRA.

With the April launch, Liberians can now pay taxes and fees wherever they have telephone reception. This capability especially benefits small-business owners who will not be required to close their businesses for days so they can travel to pay taxes. At the launch event, LRA Commissioner General Elfrieda Stewart Tamba thanked the USAID Mission and RG3 for facilitating the achievement. “They supported us from the first step of this journey,” she said. Liberia joins Burkina Faso, Kenya, Rwanda, South Africa, Tanzania, and Uganda as African countries utilizing mobile tax payments.

After many years of unsuccessful attempts, the mobile solution came about because RG3 and LRA designed a simplified, cloud-based solution suitable for a developing country with low internet penetration. While there is a daily transaction limit of US$2,000, up to 90 percent of all tax and non-tax payment transactions fall under this threshold. While not all Liberians have a nearby participating bank branch or internet connection, more than 90 percent have mobile phones. 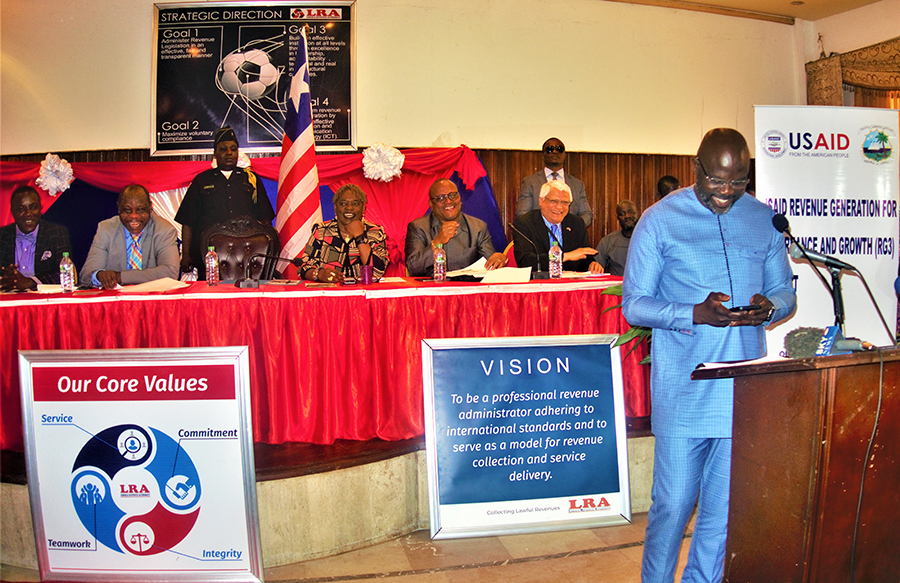 “Because of the close working relationship we have with both former and current Government of Liberia officials, Liberia is [launching] implementation of this very important USAID initative,” Chan said. “[USAID] Adminstrator Mark Green firmly believes effective and increased domestic resource mobilization is a necessary condition on the journey to self-reliance.”