Once a major agricultural exporter with robust export industries in coffee and sugarcane, Haiti now accounts for a minuscule share of global exports for virtually all agricultural commodities—around 0.1 percent to 0.4 percent. Yet, strengthening agricultural exports—including cacao, the seed from which cocoa products are made—has long been held up as a pathway to economic growth and poverty reduction in this Caribbean nation. Over the past two decades, international development efforts have sought to bolster the cacao value chain and boost output and exports.

Among DAI’s agricultural initiatives in Haiti over the past two decades, the U.S. Agency for International Development (USAID) Appui a la Valorisation du potentiel Agricole du Nord, pour la Sécurité Economique et Environnementale (AVANSE) project stands out as yielding the most encouraging results to date. The credit for that is largely attributable to AVANSE’s application of a market systems development approach in the cacao export sector. 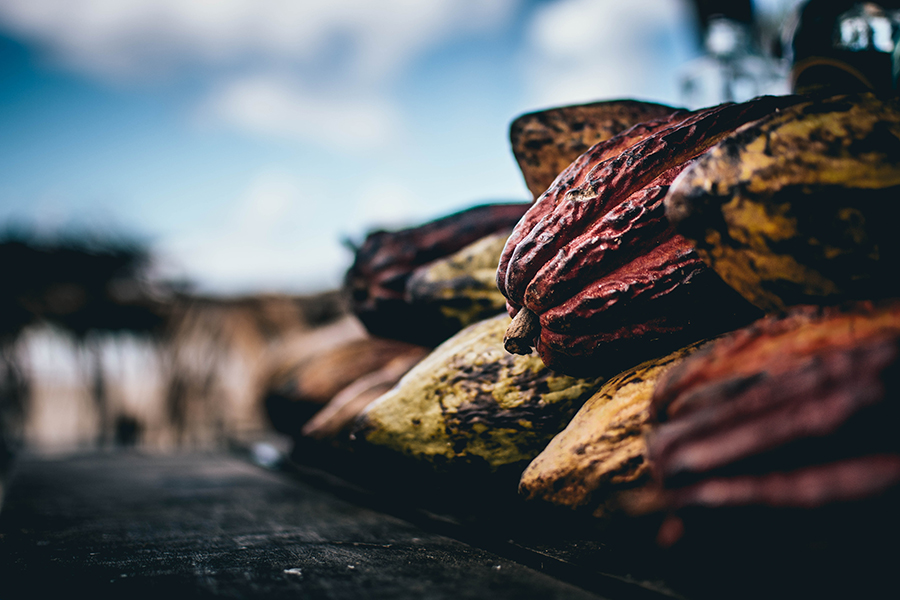 Haiti’s cacao production declined rapidly in the 1960s, when production peaked at annual levels of 20,000 metric tons, of which little was exported. Over the past two decades, the country has produced on average 5,000 metric tons annually and exported approximately 80 percent. However, recent spells of prolonged drought—most notably in 2015, 2017, and 2018—have contributed to below-average cacao exports of 2,500 metric tons per year. In 2016, Hurricane Matthew destroyed entire cacao plantations and approximately 1,000 metric tons were lost, cutting 2017 export volumes by 50 percent compared to the prior year. 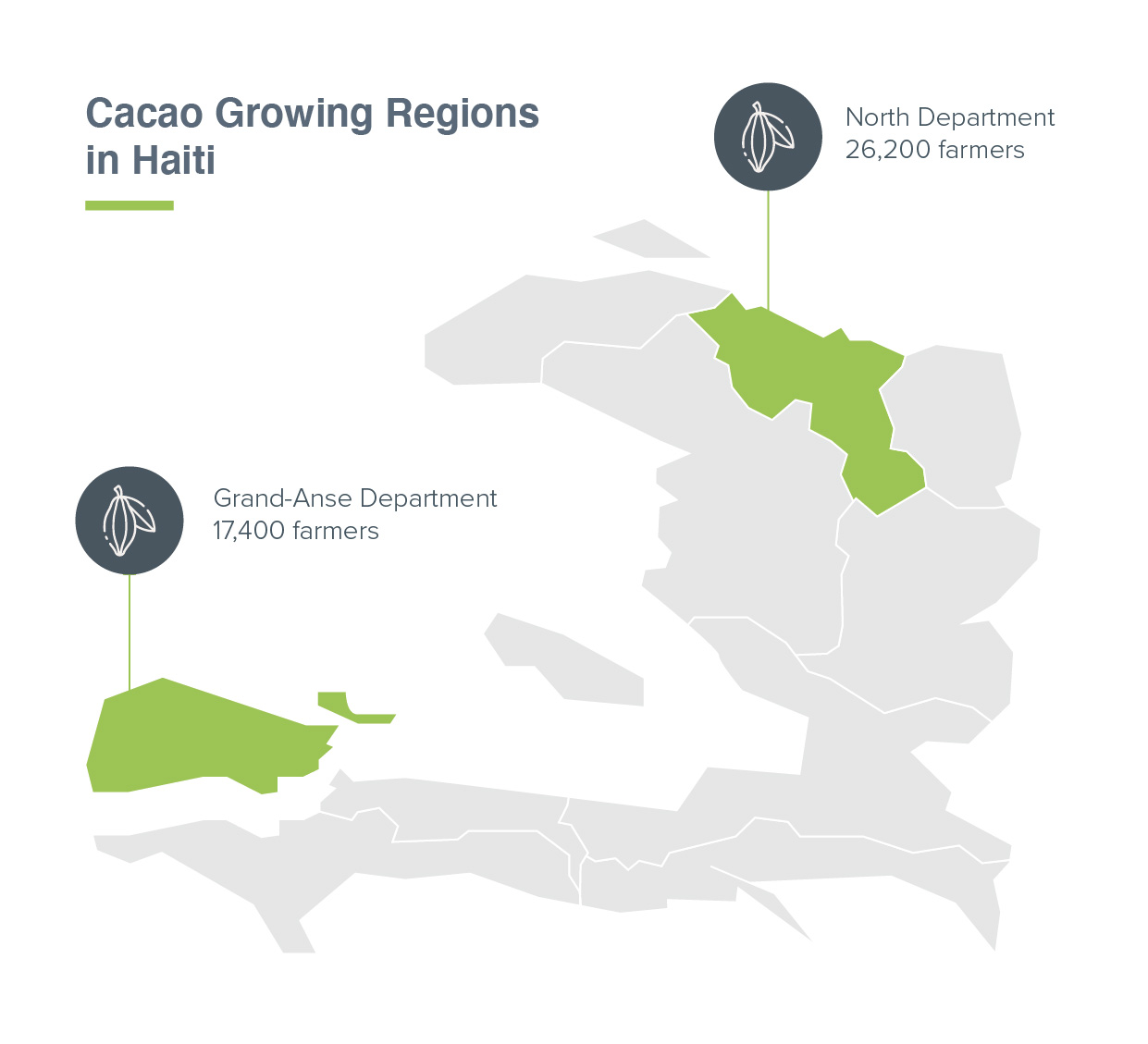 Nevertheless, cacao remains one of Haiti’s main agricultural exports, involving more than 43,600 farmers, mostly concentrated in the North and Grand-Anse departments. Generally, farmers have little direct contact with exporters and aggregation is mostly done by middlemen—dubbed “speculateurs”—who collect cacao beans and sell to exporters. Exporters conduct minor corrective drying for beans that are too wet, and they also perform some sorting and grading. The beans are then exported mostly to U.S. and European chocolate producers.

The North Department, where USAID agriculture projects have operated for the past decade, accounts for 55 to 60 percent of cacao production in Haiti. One exporter, Novella, controls 90 percent of cacao trade and supplies from the majority of the 26,200 farmers involved in cacao production in the North. Cacao cooperatives in the North are few, and the biggest federation of cacao cooperatives, FECCANO, also exports only a small volume of fermented cacao.

The irony is that Haiti produces some of the world’s finest cacao varieties—including the Criollo and Trinitario varieties—but the quality has been substandard, and a sizable proportion of cacao is sold as a low-quality unfermented product. The inconsistency in volume and quality of Northern cacao is explained by suboptimal farming practices, lack of capacity to manage weather shocks, insufficient investment in post-harvest tools, weak competition, limited access to inputs, and poor connectivity between exporters and producers. 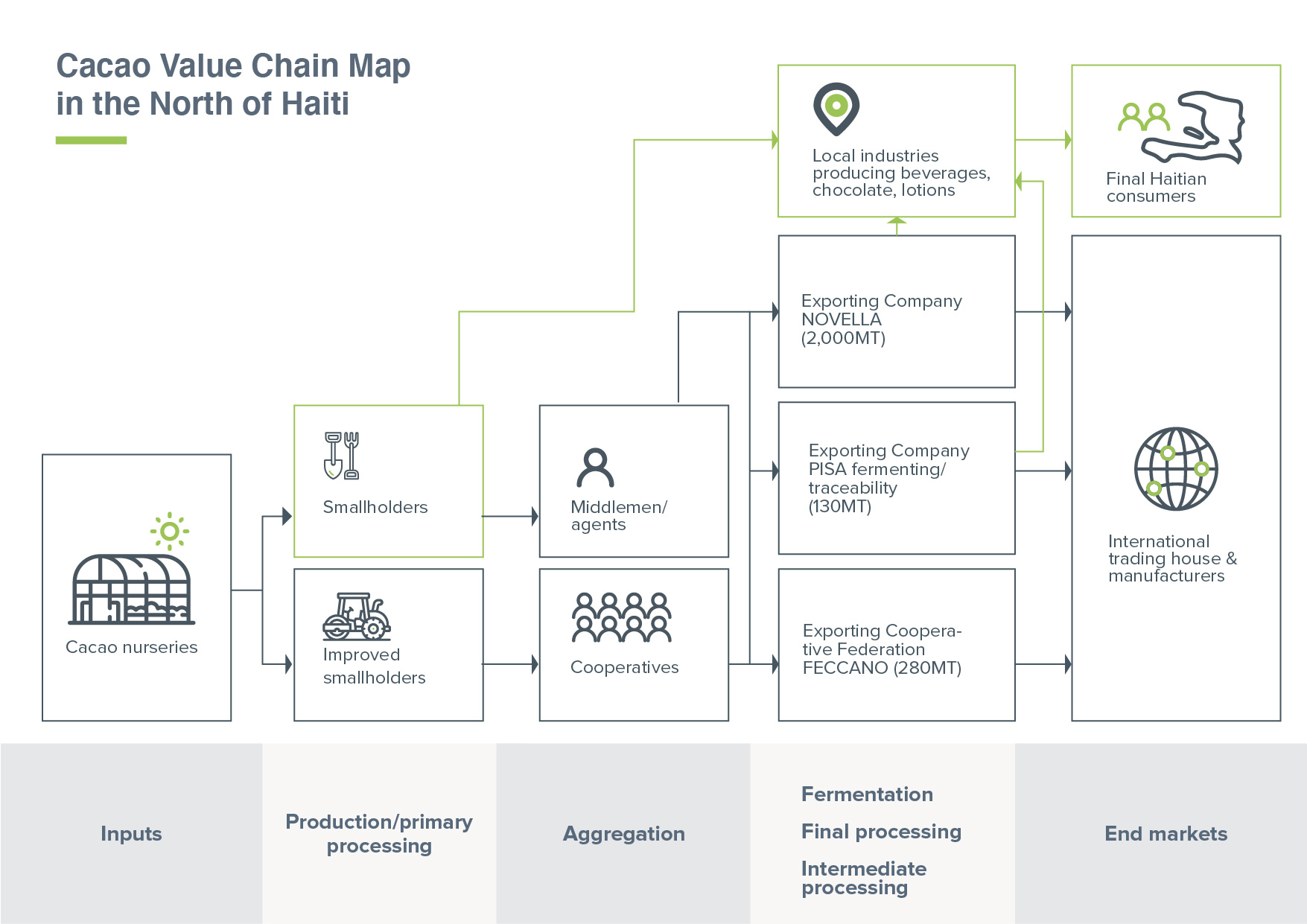 Previous Interventions in the Cacao Sector

Beginning in the early 2000s, USAID-led efforts including DAI’s Hillside Agriculture Project (HAP) improved the performance of cooperatives and enabled them to supply better cacao to Novella. HAP also worked with Novella and the cooperatives to develop pricing structures to incentivize farmers to supply improved product. Some of the cooperatives supported by HAP experienced record success, netting more than $100,000 in sales per year, compared to significantly smaller sales prior to the project’s intervention.

Novella, for its part, supplied higher-quality cacao, albeit unfermented, to its buyers and thereby increased its margins. Although HAP began laying the foundation for more profitable linkages between cooperatives and the exporter, an overreliance on improving the performance of weak cooperatives—taking a supply-side, project-led approach—and on working with only one exporter did not ultimately stimulate a more broadly competitive market.

The subsequent Economic Development for a Sustainable Environment project, also implemented by DAI, built on HAP’s improvements in production, again focusing on helping Novella work with farmers to adopt improved agricultural practices. While this approach was a step in the right direction, it was insufficient because, once again, the engagement was limited to Novella and did not stimulate a broader variety of actors. Improving the functioning of the sector required a systemwide approach.

To deepen linkages among market actors still further, AVANSE focused not on building the capacity of any single actor or set of actors (that is, farmers or farmer groups), but rather on building the capacities of a wide range of actors, including farmers and their cooperatives, multiple exporters, and universities. Not only did AVANSE emphasize creating strong relationships between actors at different functional levels (between cooperatives and exporters, for example), it also fostered healthy competition between firms at the same level (exporter-exporter) to stimulate innovation and adoption of value-adding practices such as fermentation. This approach yielded better results. 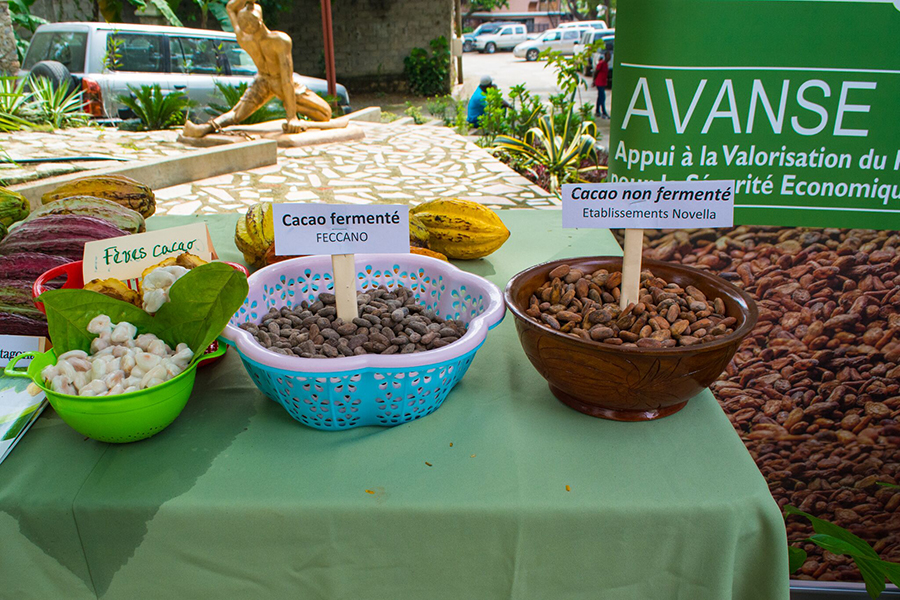 Stimulating cooperation and competition among market actors can help activate strong, functioning market systems. When markets actors can work together to increase productivity and quality, respond to market opportunities and threats, and continuously invest in industry improvements and value-adding innovations, then the ingredients are in place for an inclusive, competitive, and resilient market system. This is what happened in Northern Haiti’s cacao sector, where AVANSE leveraged the gains achieved in the value chain by previous projects and accelerated the pace of system improvements by pulling on the levers of cooperation and competition. 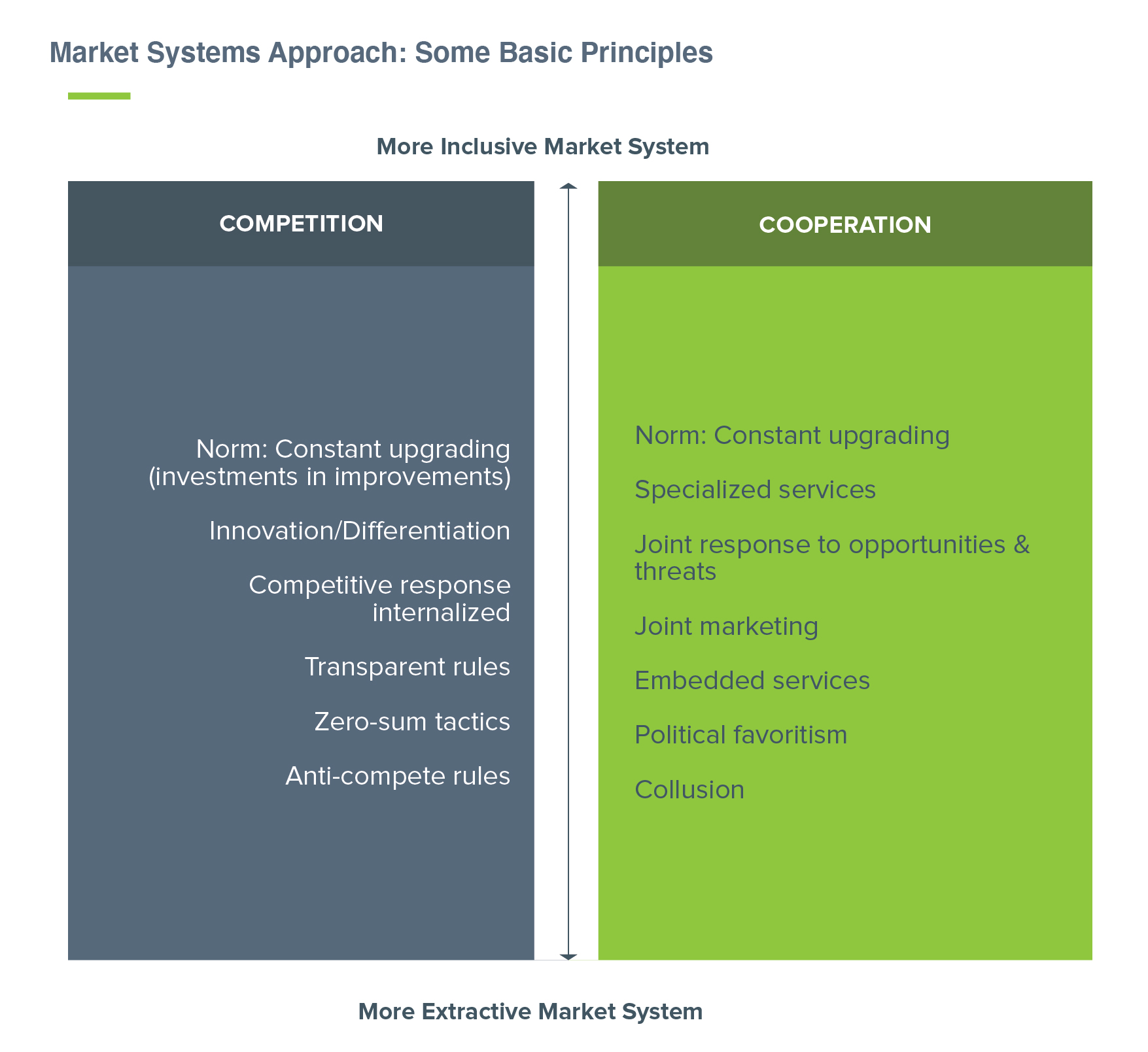 AVANSE worked with exporters and producers to improve linkages and communication. For example, AVANSE made the business case to Novella to invest in establishing a strong, woman-led cacao cooperative to allow producers to increase their share of the cacao profits by removing middlemen, which permitted Novella greater influence over the quality of cacao supplied to prepare their entrance into organic market.

Novella invested heavily in establishing the cooperative by providing an administrative office, training, monitoring and evaluation assistance, and direct credit to coop members as needed. By working directly with the cooperative, Novella is able to reduce its reliance on middlemen and meet the more stringent traceability standards in the higher-priced organic market, ultimately reducing costs and increasing profits. Improved linkages with the exporter also help coop members increase their profits by realizing better prices. As a result, side-selling to middlemen is greatly diminished.

The improved relationship with the exporter also enables the cooperative to draw on support from Novella to be more resilient in the face of shocks and stresses. For example, Novella is increasingly providing credit to cooperative members to purchase inputs for the farming business, but also to help manage socioeconomic shocks such as family illnesses, or to diversify and invest in off-farm businesses.

In a bid to deepen linkages among market actors still further, AVANSE facilitated partnerships between exporters and local processing businesses. Exporters supply lower-quality, nonexportable cacao at a discount to these local small enterprises, which then transform it into goods such as chocolate bars and cacao butter lotion for the local market. These improved linkages are spurring the growth of a rapidly expanding local cacao confectionery market in the North—one that is increasingly attracting the participation of young people and women as entrepreneurs. 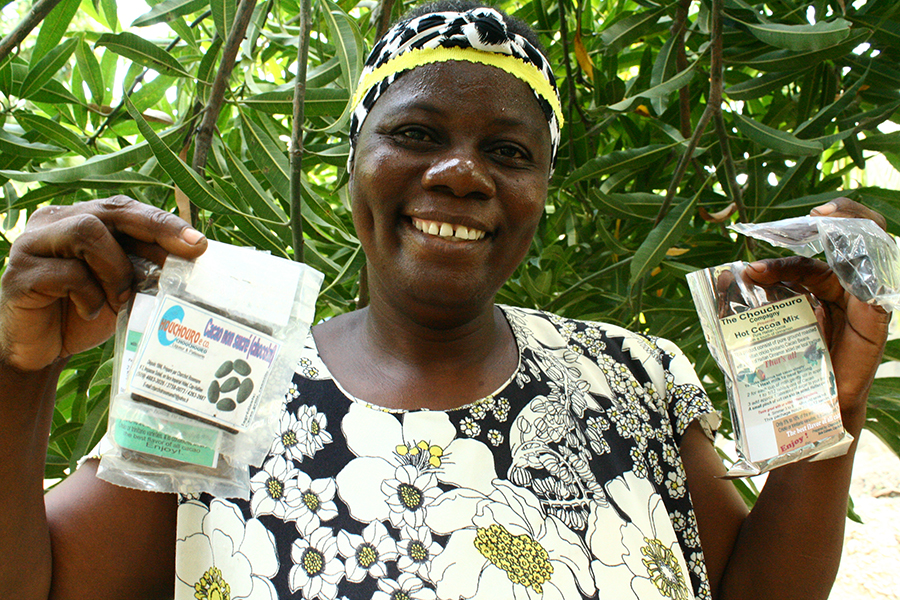 Market actors willing to adopt positive behaviors are key to driving market system change. AVANSE worked with early movers who were willing to innovate and invest in improvements, both to make them more competitive and to encourage other actors to innovate in response, thus enhancing overall industry competitiveness.

For example, fermented cacao attracts as much as a 20 percent price premium from American and European importers due to its stronger chocolate flavor. However, only 5 percent of Haiti’s cacao export is fermented after harvest; the rest is exported in raw form. AVANSE saw early on that a new market entrant, PISA, a cacao buyer and exporter, was interested in investing in cacao fermentation, whereas the exporter with the greatest market share, Novella—in operation for more than a century—was not disposed to make value-adding investments in cacao fermentation, partially due to the comfort it enjoyed in what was a relatively uncompetitive market.

AVANSE provided PISA with technical advice and materials through a 1:1 cost-sharing grant to upgrade its fermentation center. Within two years, sales doubled, partially due to selling to the higher-priced fermentation and fair-trade markets. PISA’s growing revenue and market share in turn incentivized Novella to engage and invest in cacao fermentation. Today, all three of the main cacao exporters in the Northern Corridor are fermenting cacao.

AVANSE promoted competition by strategically working with and rewarding those market actors willing to innovate and invest in improvements, and this evolution has had a cascading effect on the sector, with more exporters adopting this model and some now reaching new markets without donor support. Due to these market system changes, and also strong project interventions to increase post-drought production, cacao exports in the North of Haiti increased from $942,360 (427 metric tons) in 2013 to $6,899,937 (2,717 metric tons) in 2019.

AVANSE’s comprehensive market systems approach did not just work to improve transactions at the farmer household level but enabled a variety of actors—such as farmers, cooperatives, cacao agro-processing enterprises, and exporters—to continuously shape an environment that supports inclusive economic transformation. Impressive as the resulting export numbers are, perhaps more telling is the enhanced connectivity among the market actors who increasingly understand their interdependency and engage in win-win business ventures.

Today, for example, even after the project has closed, exporters continue to support cooperatives to increase volume, improve quality, and obtain the international certifications needed to sell into more remunerative organic and fair-trade markets.

That said, the system is still fragile, especially because of a lack of capacity to manage risks relating to weather shocks. The North of Haiti is subject to recurrent drought that has historically adversely impacted cacao production, destroying up to 48 percent of newly planted cacao trees. Cacao producers have few resources and limited access to knowledge to manage these risks by themselves.

Future donor projects in this space are urged to capitalize on the improved market linkages in the industry by incentivizing the private sector to jointly address drought-related risk with smallholders. Specifically, the private sector must invest in enabling its supplier base to employ drought-resistant practices such as pruning and shade control and to expand areas under production.

Haiti is a good example of how development programming has evolved over the past 20 years, placing the emphasis for sustainable growth on getting the market system working. But the work is not finished. The time is ripe for more market systems initiatives to enhance resilience in this sector.